ACCORDING to George Orwell, The Ragged Trousered Philanthropists by Dublin writer Robert Tressell is a book everyone should read.

One of the most influential publications in shaping working class consciousness in the 20th century, it is widely regarded as a classic.

A graphic novel version, by sisters Scarlett and Sophie Rickard, has just been published.

It vividly brings to life Tressell's semi-autobiographical tale of a group of workers and their families.

The Rickards have distilled the story and the arguments of the original book into a highly readable and enjoyable illustrated novel. 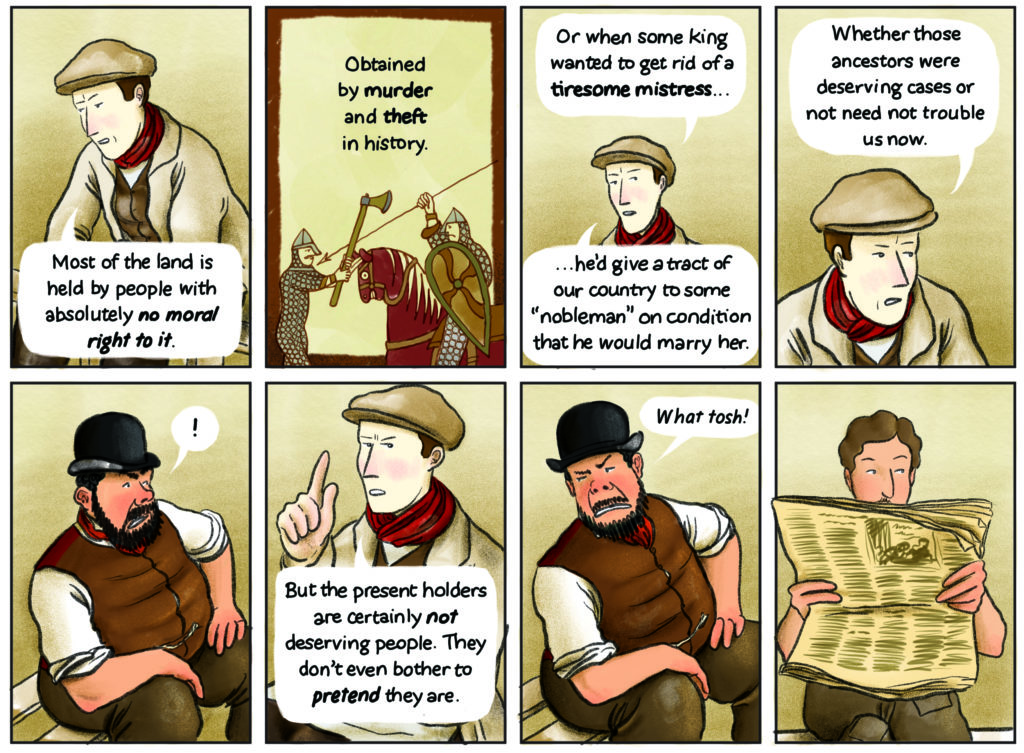 Landlordism as per Robert Tressell's The Ragged Trousered Philanthropists

The characters, beautifully and sensitively drawn, are the vehicle for Tressell’s scathing analysis of class relations and the impact of poverty on family life before World War I.

The threads that bind Tressell’s book together are topics such as creeping privatisation, insecure employment and the demonisation of poverty — many still having some resonance today.

The philanthropists of the title are the workers who willingly give their labour only to enrich their employers. 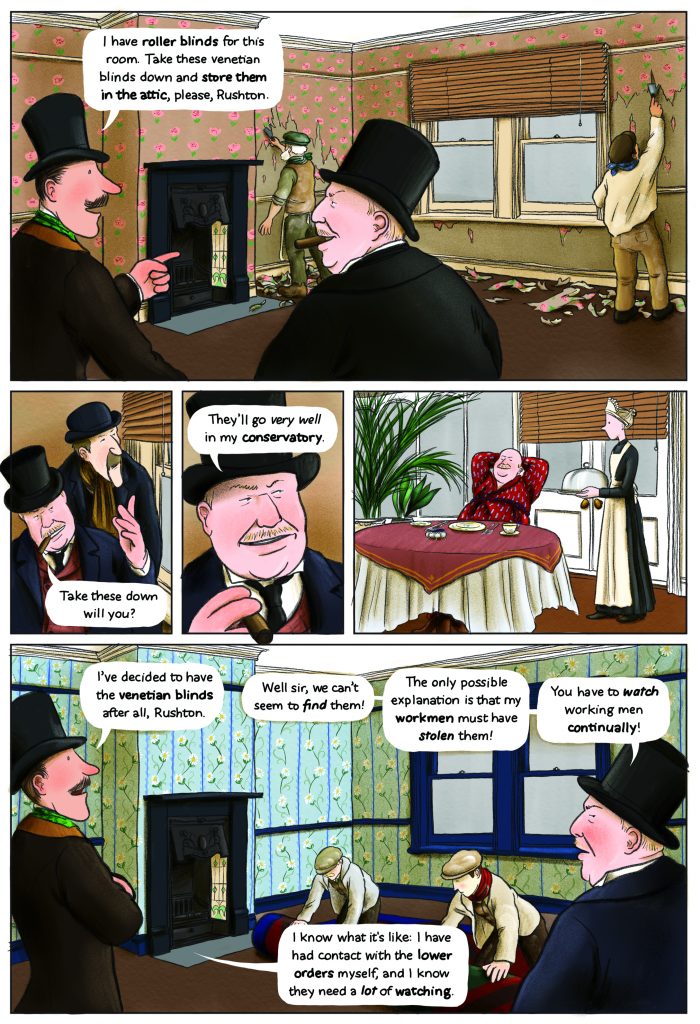 Tressell’s hero of the book Frank Owen tries to enlighten his friends about their manipulation, but they largely refuse to recognise their oppression.

The Dublin author originally sub-titled the book: "Being the story of twelve months in Hell, told by one of the damned, and written down by Robert Tressell.”

He adds in the preface, “There are no scenes or incidents in the story that I have not either witnessed myself or had conclusive evidence of.” 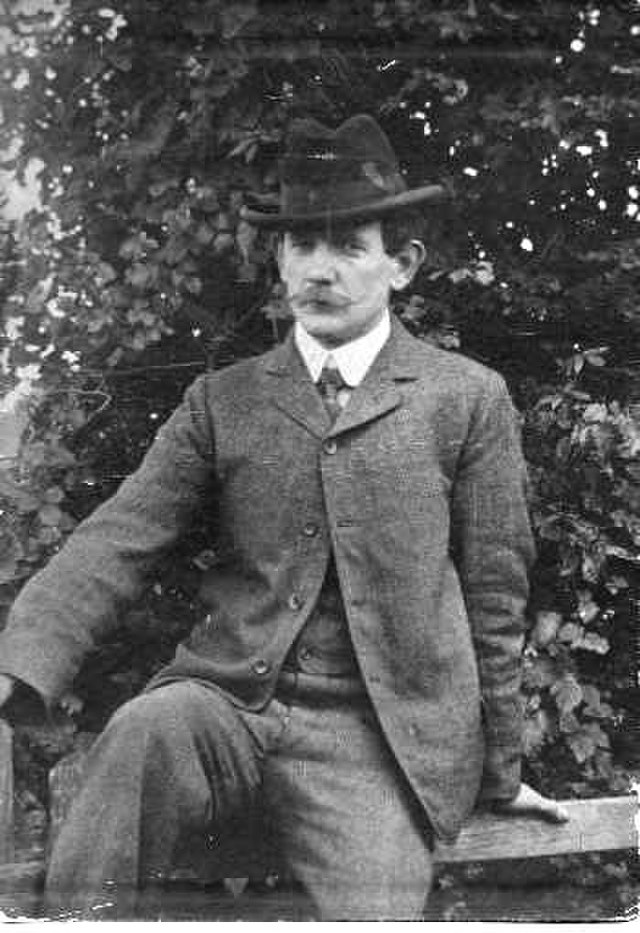 The life and career of Robert Tressell

Robert Tressell was born in Wexford Street in Dublin.

Tressell was his nom de plume, taken to honour his trade of house-painting and sign-writing.

He was born Robert Croker, but subsequently adopted his mother's name Noonan.

Little is known of his school days — they were probably spent in Dublin.

He subsequently lived in Britain and at the age of 20 served six months in Walton Gaol for housebreaking.

Subsequently he headed off for South Africa taking part in the “diamond rush” and leading a life which seldom seems to have been boring. He married and divorced, then subsequently won custody of the daughter of that marriage, Kathleen.

An early supporter of Sinn Féin, he helped form the militant Irish Brigade which fought alongside the Boers against the British forces.

It would be fair to point out that The Ragged Trousered Philanthropists’ broad appeal does owe something to the fact that Noonan left out any mention of Irish nationalism: equally disturbingly, there is no mention in his book of the other great issue that scarred that time and place: racial segregation and black rights.

Noonan eventually moved back to London with his daughter, soon relocating to Hastings — which became Muggsborough in The Ragged Trousered Philanthropists. He scraped out a living as a house painter and signwriter, a theme in his novel. In his writing he proved to have an instinctive feel for the pulse of the working class life.

His magnum opus was completed in 1910, but the 1,600-page hand-written manuscript was rejected by three publishing houses.

Sadly, Noonan never lived to see the publication of his novel, which had a tortuous journey before being available on the bookshelves. 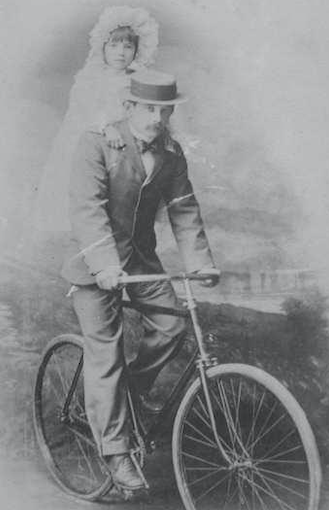 When it was finally published the book's effect was enormous.

Sometimes credited with helping Labour win the 1945 general election in Britain, many argue that it continues to inform socialist ideology to this day.

In a recent literary survey of the top one hundred books of the twentieth century, The Ragged Trousered Philanthropists came in 62nd out of 4,600 nominations. Interestingly, it was the only book of the hundred chosen that unambiguously espoused socialism.

Robert Noonan died three years before his book was published.

The rejections had severely depressed him, and Kathleen had to save the manuscript from being burnt.

Unhappy with his life in Britain, the Dublin man decided that he and his daughter should emigrate to Canada.

However, he got only as far as Liverpool when he was admitted to the Royal Liverpool Infirmary Workhouse, where he reportedly died of phthisis pulmonalis — a wasting away of the lungs — on February 3, 1911, aged 40

Kathleen parted with the manuscript in 1914 for the one-off fee of £25. Needless to say, for a book which has subsequently been reprinted more than a hundred times world-wide, publishers have made a fortune in royalties out of it over the years.

It's said that one publisher was eventually shamed into sending some more money along to Kathleen Noonan in later years — another £25 so she could buy a television to watch a dramatisation of her father's work on BBC. 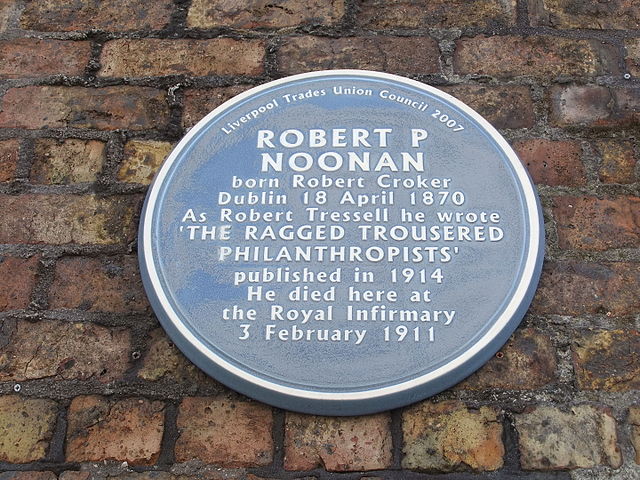 With a dreadful symmetry, a book that warned of the dangers of exploitation, was — along with its owner — thoroughly exploited.

Kathleen Noonan had become a nurse in England, dying in Bristol in 1988 aged 95.

Robert Noonan is buried in a pauper's grave in a corner of Walton Park cemetery in Liverpool, along with twelve other paupers.

His last resting place is now marked by a simple marble stone.

Dublin has produced many great writers: Swift, Joyce, Wilde, O’Casey and Beckett amongst many others who between them reached the very topmost heights of English literature. But few have had so much influence while at the same time gaining so little recognition in their lifetime as Robert Noonan. 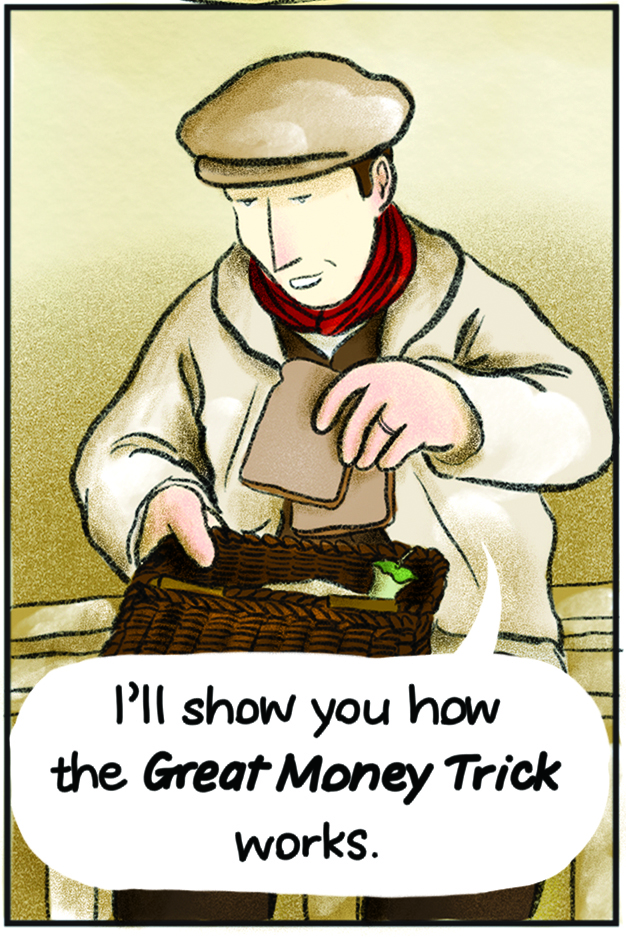 It is not, however, a fast-paced thriller, nor a gripping, edge-of-the-seat page-turner. Even its most ardent admirer would admit that the book requires a high degree of concentration. 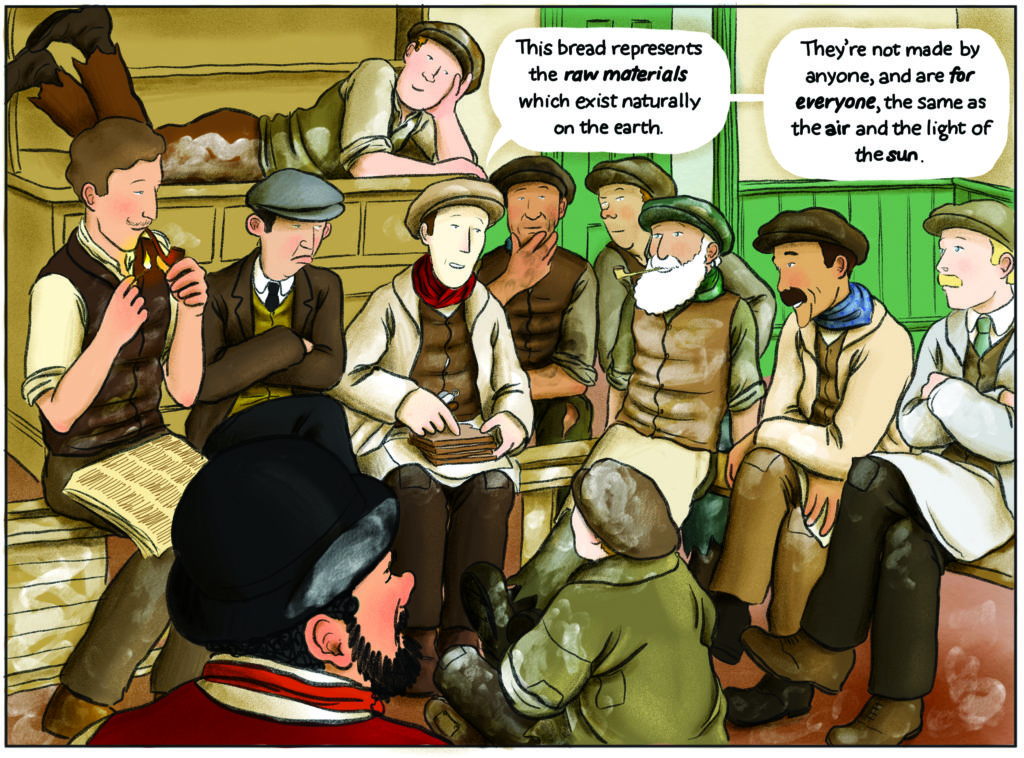 Which is one reason that the Rickards’ graphic version of the book is a welcome addition to the many versions of The Ragged Trousered Philanthropists.

The novel is full of set pieces, both comic and tragic, and the Great Money Trick is widely regarded as one of the greatest passages of comic political writing in literature.

During a break at work, the protagonist Frank Owen tries to explain to his sceptical workmates the hollowness of capitalism to his— using bread, penknives and halfpennies. 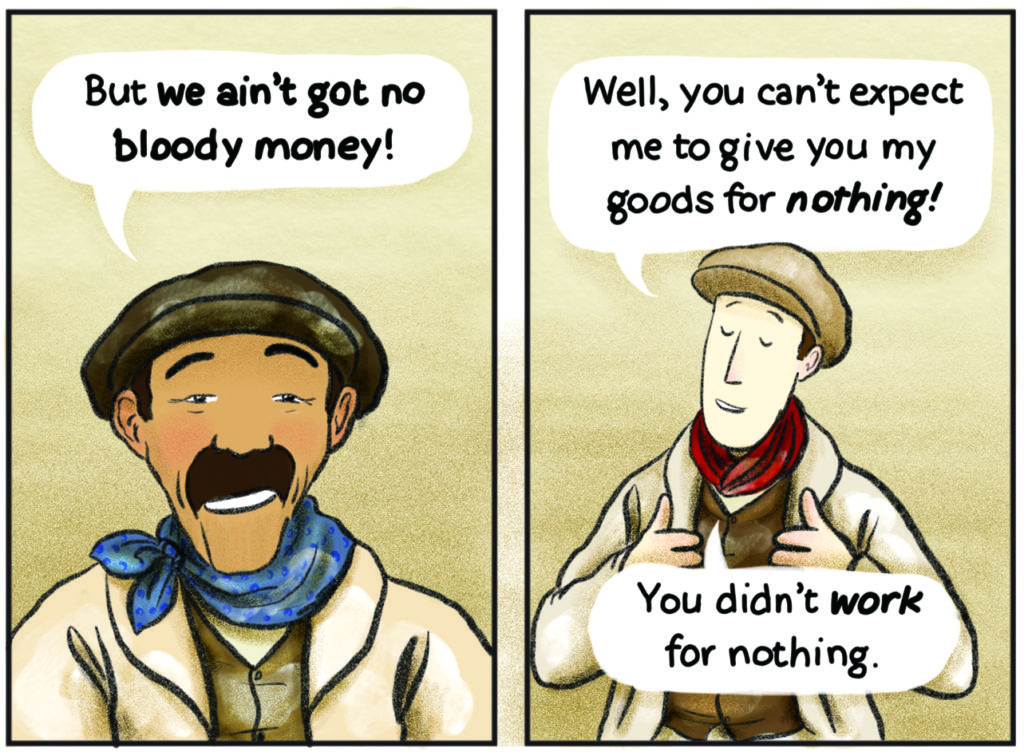 By dividing the bread among three workers, making them ‘work’ for a pittance and forcing them to buy back what they have produced, Frank Owen gives his workmates a lesson on capitalism, a system that he sees as an outrageous confidence trick.

The manuscript of The Ragged Trousered Philanthropists has been in the care of the Trades Union Congress since 1958 and can be seen on the TUC History Online website. 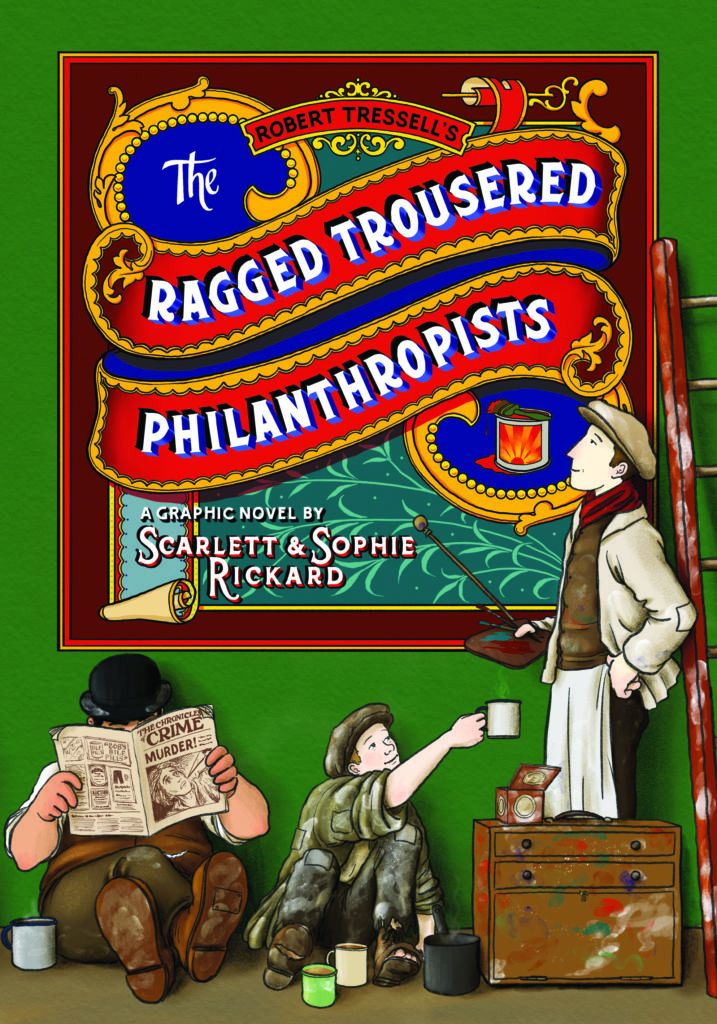 The Ragged Trousered Philanthropists graphic novel, by Scarlett and Sophie Rickard, is published by Self Made Hero

The Ragged Trousered Philanthropists graphic novel, by Scarlett and Sophie Rickard, is published by Self Made Hero. Price £14.99. For further information visit rickardsisters.com/our-books/the-ragged-trousered-philanthropists/