Irish trailblazer Percy French honoured on centenary of his death

THE centenary of the death of celebrated Irish songwriter Percy French has been marked by the installation of a memorial in his honour located in the shadow of the mountain range which inspired one of his best-loved songs.

Widely deemed one of Ireland’s greatest songwriters, composers and entertainers, French is best known as a writer of humorous songs such as Phil The Fluther’s Ball, Slattery’s Mounted Foot, Are You Right There Michael, Come Back Paddy Reilly to Ballyjamesduff and, most famously, The Mountains of Mourne.

This month a sculpture dedicated to the singer wad unveiled where the mountains of Mourne sweep down to the sea at the Slieve Donard Hotel, Newcastle, County Down.

The €230,000 installation, which consists of the words from The Mountains of Mourne, interwoven in three metal panels, was unveiled by Pulitzer Prize-winning poet Paul Muldoon, who is a renowned French fan.

Commissioned by Hastings Hotels, who own the Slieve Donard Hotel, the installation is designed by Andrew Todd of Tandem Design, who has worked on Titanic Belfast and King John’s Castle in Limerick and was produced by local craftspeople. 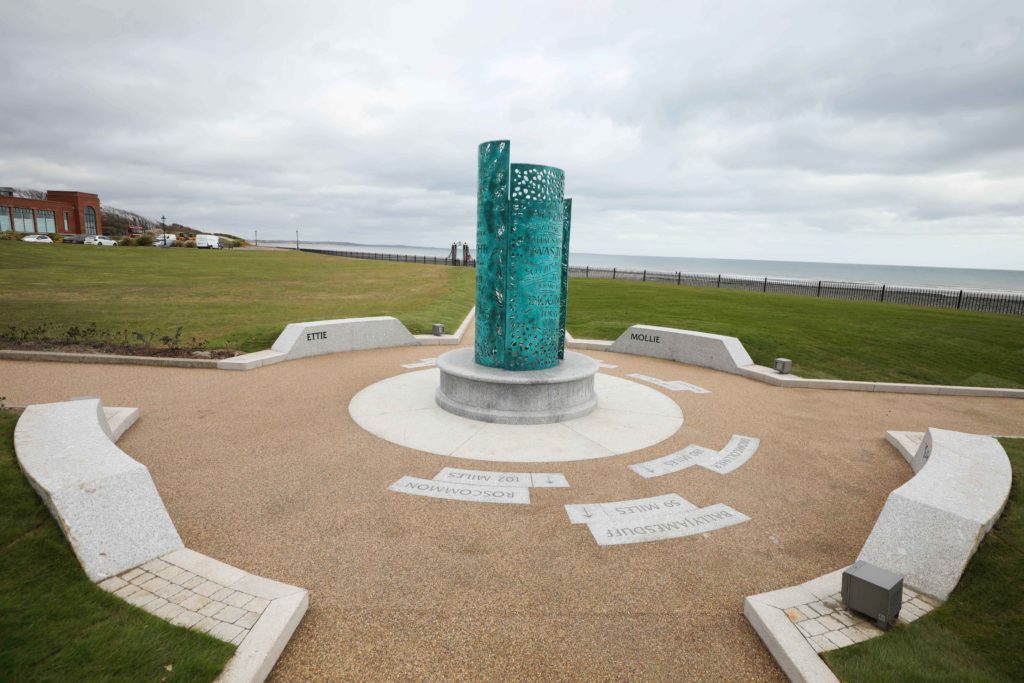 General view of the installation to commemorate the centenary of the death of Percy French (Pics: Kelvin Boyes/Press Eye)

The sculpture is bordered by four locally sourced granite seats, which are dedicated to French’s second wife and daughters, with way markers to famous French locations such as his birthplace in Roscommon, Ballyjamesduff, Drumcolligher in Co. Limerick, Formby - where he died, and London.

“As Tourism Northern Ireland gears up to launch its new Embrace a Giant Spirit campaign, it is appropriate that we have chosen to celebrate the achievements of a giant spirit of the Victorian Age,” Howard Hastings, Managing Director of Hastings Hotels, pictured above, said.

“This new installation will serve as a monument to the memory of a man who blazed a trail in his own era and has left a huge cultural imprint on the country.

“Percy would be pleased that so many elements of his life, including his wife and his three daughters, are celebrated in Mourne granite.”

French, who was also a talented author, editor, poet and accomplished painter, had a long history with the county Down town.

His first wife, who died in childbirth, was a sister of Countess Annesley whose family owned land on the Mountains of Mourne.