John Minihan on a day in London with Bacon and Burroughs

THE centenary of the birth of William Burroughs – the self-described junkie and queer author – is being celebrated this year all over America, especially in the town of Lawrence, Kansas, where he died on August 2, 1997.

Born on February 5, 1914 in St Louis, Missouri, Burroughs came of a prosperous family, whose wealth stemmed from his grandfather’s invention of the adding machine. After graduating from Harvard, Burroughs lived on his parents’ money, travelling extensively throughout America.

Rejected by the US Army, he worked at a variety of jobs. For a spell he was a private detective, a pest controller, a clerk and a factory worker. During this time he developed his interest in drugs and their effects became central to his life and work.

In the late 1940s, Burroughs met Allen Ginsberg and Jack Kerouac in New York. They came to be seen as the Holy Trinity of the Beat Generation. In all the photographs of Burroughs his appearance remained the same, a tall, gaunt and sinister figure with hat and cane.

Years of drug taking left his skin a hideous grey. Ginsberg, a keen photographer, documented much of what we have seen of the Beat movement – many of his photographs were taken in Tangier, a favoured haunt of the Beats.

Burroughs, whether we accept, reject, or simply ignore him, is part of American literary culture. Norman Mailer once described him as the only American novelist who might conceivably have been possessed by genius.

Burroughs has provoked, outraged and inspired generations of writers, musicians and actors. Many – among them his friends Andy Warhol, Mick Jagger, David Bowie and Patti Smith – were photographed with the high priest of the Beat movement.

I first heard of Burroughs in the Colony Room, Dean Street, Soho, in London in the early 1970s. I spent much of my spare time in that small space, like several generations of bohemians. 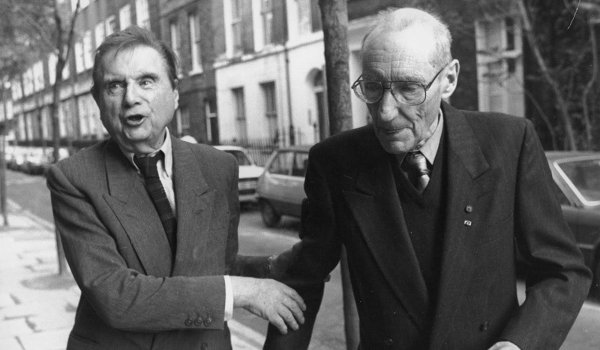 Francis Bacon and William Burroughs in London in 1989

It was a place where we came to dissolve our inhibitions, said Francis Bacon with a glass of champagne in his hand. Bacon was a close friend of Burroughs, whom he’d met in Tangier in the ‘50s. Whole sections of The Naked Lunch were written there.

Burroughs went to the Colony Room when he lived in London in 1966, while Bacon had been a member since its heyday in the 1950s. The proprietor, Muriel Belcher, once gave me a bollocking for pointing my camera at her. Later, she became a subject for a painting by Bacon, who she adored and who became the Colony’s most illustrious member.

Burroughs shocked Britain with The Naked Lunch and his other surrealist novels inspired by heroin addiction and homosexual fantasy. He was notorious for other reasons too: in Mexico City in 1951, he had shot and killed his wife Joan Vollmer while trying to shoot a glass off her head. Burroughs attributed his act to possession by ‘the evil spirit’, which he set himself to exorcise through writing.

In the summer of 1988 at the October Gallery, London I attended a private view of William Burroughs’ paintings. The guests included Bacon, dapperly dressed for the occasion. Visitors to the show saw works on paper as well as many made by paint and gunshot holes on plywood.

Burroughs had a passion for guns and cats. His interest in the visual arts may well have been inspired by his friendship with the artist Brion Gysin – they had lived and worked together in Paris. It was Gysin who introduced Burroughs to the scrapbook and cut-up techniques, the random combination of words and forms would be a huge influence on his writing.

Burroughs spoke of Samuel Beckett, whom he’d met in Berlin in 1976 along with Ginsberg and Susan Sontag. They had heard that Sam was working at the Berlin Academy of Art and they went to visit him. They brought along a bottle of whiskey, and he received them graciously.

Burroughs was the exemplary avant-garde figure of the post-War world. Like Bacon and Beckett, he’s one of the immortals. Having coffee with him once, I suggested that I would have an exhibition of my photographs called ‘Bacon, Beckett & Burroughs’. The exhibition opened at The October Gallery, London, in 1990. Burroughs seemed pleased to be on the wall with Beckett.

The three Bs were darkly funny individuals, enraged at corruption and greed, overflowing with compassion for the powerless. They were the original thinkers of our time.