UNIVERSITY researchers have revealed the origin of more than 45,000 Irish and British surnames in a new dictionary of family names.

The Oxford Dictionary of Family Names in Britain and Ireland, released today, is the result of an extensive four-year study by a team from the University of West English (UWE) in Bristol.

Historical linguists, medieval historians, lexicographers and experts on Irish, Scottish and Welsh surnames collaborated for the project, which investigated the linguistic, historical and geographical origins of 45,600 of the most frequent British and Irish surnames.

The team examined records dating from between the 11th and 19th centuries to procure new explanations of names that are far more reliable and up to date than those currently available.

Previously unseen medieval and modern sources such as census returns, tax records and church registers have updated and even replaced accepted origins of many surnames.

The dictionary is Ireland and Britain’s largest and most comprehensive surname collection. 5,000 of the surnames listed in the book are of Irish origin, representing surnames found in Britain today. 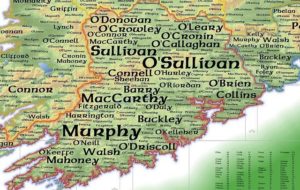 Scroll down to discover the origins of 12 Irish surnames ...

While the meaning of the majority of Irish names is well-known, the dictionary provides early-bearer evidence, for the first time, for all of these names.

Professor Richard Coates, who along lead the UWE team along with Professor Patrick Hanks, said: "There is a widespread interest in family names and their history.

"Our research uses the most up-to-date evidence and techniques in order to create a more detailed and accurate resource than those currently available.

"We have paid particular attention, wherever possible, to linking family names to locations. Some surnames have origins that are occupational - obvious examples are Smith and Baker; less obvious ones are Beadle, Rutter and Baxter.

"Other names can be linked to a place, for example Hill or Green, which relates to a village green. Surnames which are 'patronymic' are those which originally enshrined the father's name - such as Jackson, or Jenkinson.

"There are also names where the origin describes the original bearer such as Brown, Short or Thin - though Short may in fact be an ironic 'nickname' surname for a tall person."

Here are 12 examples of Irish surnames and where they originate from courtesy of the Oxford Dictionary of Family Names in Britain and Ireland:

Hickey is the anglicised form of Ó hÍceadh ‘descendant of Ícidhe, a byname meaning ‘doctor, healer’.

This is evidenced in some early bearers from the 16th century onwards. Take for example one Maurice Hicky, leche [doctor] in 1549 in Cahir, Co. Tipperary, or Gillecully O’Hickey, a physician, in 1585, also in Co. Tipperary.

Cunningham, comes from the nickname Mac Cuinneagáin, or ‘son of the little leader/chief‘.

In 1591 in Coppingerstown, Co. Cork, we find William McQuynegan alias Wiliam negeaghy ( ‘of the wind). We can only guess why he was known as ‘windy’!

These surnames are examples of Welsh or English names which ‘Gaelicised’ in Ireland following the Norman Conquest of Britain.

McHale (Mac Haol), Hosty (Mac Oiste), Merrick (a bearer named Oidsi Mac Mhebric is listed in the Annals of Ulster in AD 1272) and Meyler (Mac Maoilir) all contain a Welsh personal name, but have received the Irish prefix mac ‘son of’.

Patterson is of English origin, but in Co. Galway, Ireland, it has been commonly adopted for Irish Ó Caisín ‘descendant of the little curly-headed one’, which was more regularly anglicised as Cussen or Cussane.

This name, and similar adoptions, such as Abraham, Bird, Buckley, Waters, all indicate the complexities involved in identifying Irish family names from their adopted English language forms.

Campbell originated as a nickname from the Gaelic caimbeul, literally meaning ‘crooked mouth’.

In Latin, it was often represented as de campo bello, or ‘of the beautiful field’, which sometimes led to the name being translated into Anglo-Norman French as Beauchamp.

Clan Campbell is a prolific and historically influential Highland Scottish clan with many branches, claiming descent from Gille Easpaig Caim beul Ó Duibhne, who lived in the early 13th century.

Tobin has a strong association with Ireland, and is a form of Irish Tóibín, a gaelicized form of the Norman French surname Saint Aubin, from Saint Aubin in Brittany.

Hawkins has three possible origins, two of which point to an origin in England.

However, Hawkins may also be Irish in origin, from Ó hEacháin ‘descendant of Eachán’. Eachán is a pet form of the personal name Eachaidh, which means ‘horseman’.