YESTERDAY, 30 January 2020, marked 48 years since 26 unarmed civilians were shot by British forces as they campaigned for civil rights.

Fourteen people died and a further twelve were injured as members of the Parachute Regime shot people in the back as they ran, and those who were stopping to help the injured.

Chilling photographs of the massacre shook the island of Ireland and further afield, with footage emerging of Catholic Bishop of Derry Edward Daly using a bloodied handkerchief as a white flag while escorting people through the streets of Derry becoming known as the symbol of Bloody Sunday.

The killings sparked huge demonstrations across Northern Ireland, with thousands of people taking to the streets to demand justice in the following days and subsequent anniversaries to ensure the memories of those killed would not be forgotten. 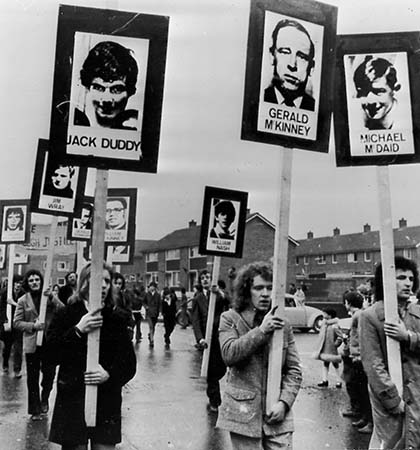 Marchers carry signs for deceased on the one-year anniversary of Bloody Sunday. (Photo by Getty Images)

Almost half a century on from the atrocity which illuminated the dire state of human rights afforded to Irish people in the six counties, the families of those murdered are still waiting for justice.

The decision, decades later, to prosecute one soldier-- just one-- offered some tentative solace for the affected families, but subsequent delays and protests from people who believe the soldier should not be put on trial has so far only caused further pain.

The trial of 'Soldier F' for the murder of William McKinney (27) and James Wray (22) as well as for the attempted murder of Joseph Friel, Joe Mahon, Michael Quinn and Patrick O'Donnell, has still not happened, and fears that the trial would not go ahead were heightened last month as the incoming British Government indicated that soldiers who had been stationed in Northern Ireland could gain protected status.

During the Queen's Speech, which marked the resuming of British Parliament and set out the plans of Boris Johnson's government, Queen Elizabeth said that the government would "bring forward proposals to tackle vexatious claims that undermine our armed forces". 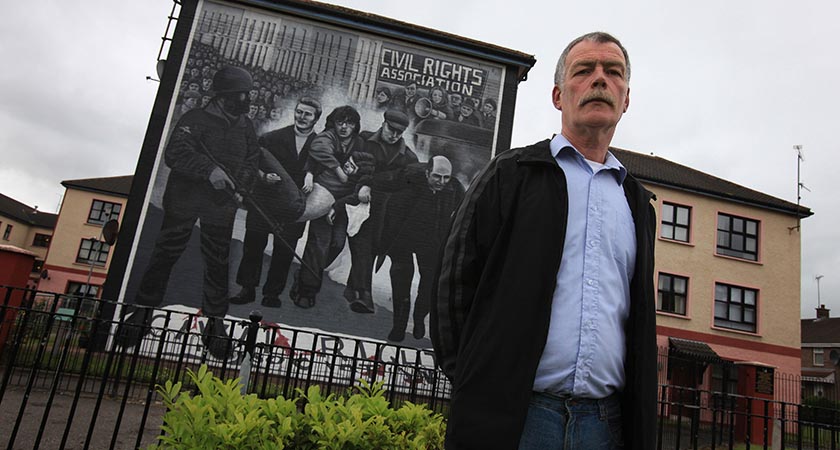 2010: Gerry Duddy, brother of John 'Jack' Duddy, stands in front of a mural depicting his brother being carried to safety as Father Daly waves a white handkerchief in Derry. Jack Duddy was the first to be shot and was killed by a single bullet to the chest on January 30, 1972 . (PETER MUHLY/AFP/Getty Images)

Yesterday, families of the victims of the state-sponsored massacre gathered by the Bloody Sunday monument in Derry, where the names of those killed and injured were read out before a minute's silence was held.

The annual Bloody Sunday March will take place this weekend, Sunday 2 February, with a spokesperson from the committee behind the march telling Derry Now "we have come too far to stop now".

"Over the course of the 48 years since murder erupted in blood around Rossville Street many have peeled away and pulled out of the campaign.

"People have their lives to live, families to care for, problems of their own.

"Some lost hope of the rulers of Britain ever allowing light to fall on the facts. Others came to accept a political argument that the pursuit of truth might endanger peace.

"But the case for continuing to march becomes ever stronger with the passing of the years."