An impression of the plan microbrewery for Covent Garden.

Diageo, the makers of Ireland's most famous drink, has today announced plans for a £73 million Guinness microbrewery in London.

'Guinness at Old Brewer's Yard' is set to open its doors in Covent Garden in Autumn 2023, with the location having first brewed beer back in 1722.

The investment builds on the success of the Guinness Storehouse in Dublin, which is often viewed as one of the city's best tourist attractions, as well as Johnnie Walker Princes Street which opened in Edinburgh in 2021.

The 50,000 sq ft microbrewery will produce limited edition beers and offer guests tours with Guinness beer specialists to enjoy and learn about the iconic stout, its history and plans for the future.

A store will also be on-site, with new and exclusive brews also being available to try.

An open-fire kitchen with a rotating cuisine, restaurant and 360 degree glass rooftop space is also in the development's plans.

It is expected to create up to 150 jobs for the capital, and will also be the southern UK hub for the company's Learning for Life Bartending and Hospitality Programme. Diageo hopes for over 100 London based students to graduate from the programme each year.

The company says the brewery "demonstrates its confidence in London and the UK as a go-to destination for tourists and its commitment to the hospitality sector".

Guinness sales in Great Britain have grown by over 30% in the last six months, with one in every ten pints sold in London now being a Guinness. 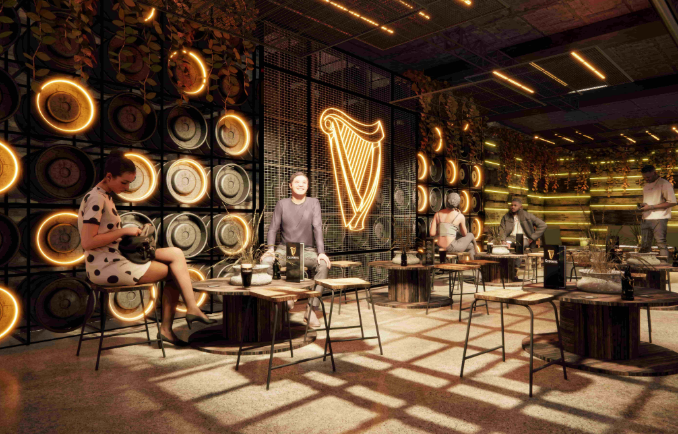 "We’re excited to create a new home for Guinness in the heart of London. ‘Guinness at Old Brewer’s Yard’ will strengthen London’s hospitality community and be a must-visit destination for thousands of visitors to enjoy."

"Government support over the last two years has been vital for pubs and bars. Coming out of the pandemic, the long-term vitality of the trade will be significantly helped by the alcohol duty review and continued freezes in duty."

Old Brewer's Yard is owned by Mercers' Company, with its Chief Executive Rob Abernethy saying they are delight to welcome Guinness to the Covent Garden estate.

"We have worked closely with Diageo to develop proposals which will restore Old Brewer’s Yard’s historic origins in a contemporary context," he said.

"The significant level of investment is a major boost to London’s recovering economy and will provide a one-of-a-kind immersive experience, shining the spotlight on Covent Garden as a global visitor destination.

"Old Brewer’s Yard will provide a wonderful platform for the Mercers’ Company to continue its philanthropic work, helping to create positive change so that everyone has the chance to lead a fulfilling life."