ALAN CARR has been criticised for a rather risky joke he made about Meghan Markle on his gameshow, Epic Gameshow.

The British comedian took a swipe at the Duchess of Sussex which some viewers thought went "too far".

On Saturday's episode, one of the contestants was asked which nickname she'd like to play under, and she responded: "The Queen of the Palace."

Alan immediately shot back, saying: "I think that's the nickname Meghan had her heart set on - and look how that turned out."

While some viewers thought the joke was "snide" and  little "risky", others felt it was perfectly acceptable, and that Ms Markle shouldn't be impervious to criticism or ridicule.

One person tweeted: "How many people has Alan Carr had cheeky, light hearted digs at over this series? Why is Meghan Markle above being mocked, when everybody else isn't?"

"It was a joke," another wrote. "He's a comedian. That's literally his job, people." 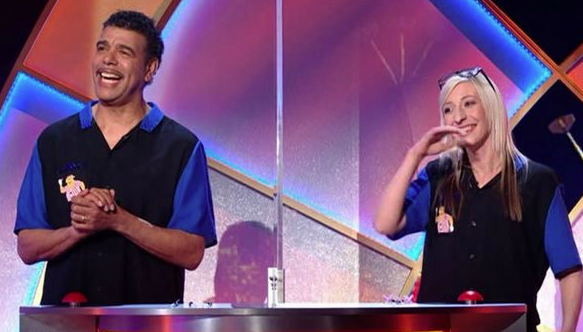 Contestants on Alan Carr's Epic Gameshow found the joke funny, but not everyone online did

Though there were some who felt the joke exemplified why the Duke and Duchess of Sussex left the UK in the first place.

"Really? And you wonder why Harry wanted to take her away?" Another person tweeted.

It's understood that 190 complaints were lodged to Ofcom in response to Saturday's episode, complaining about a 'lack of diversity'.

Last year, Harry and Meghan famously announced that they would be controversially stepping back from their royal duties, and two months ago, they sat down with Oprah Winfrey to talk about their experience and exit from the Royal Family.

The couple threw a number of damning accusations at Harry's family, including accusing one family member of racism - though the vast majority of their claims are unsubstantiated, and many have even been proven false.

The Sussex's actions have driven a huge wedge between themselves and the rest of the family, and it's understood that Harry received an extremely "frosty" reception when he returned home to the UK for the first time to attend his grandfather Prince Philip's funeral last month.