SOMEBODY took a swing at Bertie Ahern last month.

I’m not supporting physical violence here but it was kind of comical.

Bertie was in a pub with some faithful supporters when somebody on crutches took objection to his boisterous laughter and lashed out at him with one of the crutches. It doesn’t look like the start of a revolution but it did create a bit of a stir.

Now there is an awful lot of anger out there against Fianna Fáil and against the personalities who drove the party during the boom, against Bertie Ahern and Brian Cowen.

People in dire financial straits, people seeing emigration enter their families again, are outraged at the thought of what has happened. That is perfectly understandable.

The swinging of that crutch though against the uninjured Bertie does suggest something about the economic mess and about our response to it that looks in the long term as if it will only hold us back.

Firstly, we need to recognise our own role in the Bertie years. Not in the ‘we-all-partied’ line beloved of Fianna Fáil apologists, whereby blame was deflected on to those who were the victims of others’ greed.

Not in accepting guilt because a new house was bought when society, media and politics were all telling us buy now or buy never.

It would be a little bit rich to blame individual Irish people for succumbing to a message that was delivered by every section of society. That would be like blaming individual mass goers for the failings of the Catholic Church.

On the other hand though there is a clear political amnesia present in this country.

I recall coming back from a prolonged trip to Ireland just around the time that Tony Blair was elected. We had kind of missed the whole thing in a way but were back for the aftermath. 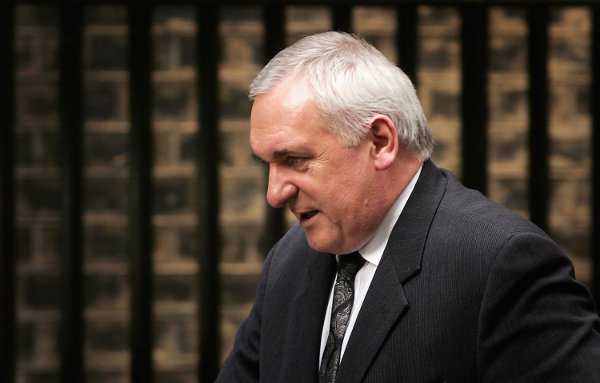 The weekend after his election we were at a party and the fall of the Tories after so long was obviously part of the talk. What has always stuck with me about that night was one London Irish lad who I had spoken with about politics before.

He had told me he’d voted for Thatcher and was an admirer of the Tories, celebrating Blair and talking about Portillo as if he was a die-hard Labour man.

It was a kind of instant amnesia that has always stayed with me. It was as if no one had ever voted for Thatcher, as if we were all waiting for this new dawn.

Much like the death of Princess Diana it appeared as if a media generated truth became everyone’s new reality.

Unfortunately the Irish response to our economic collapse has been a bit like that.

All of a sudden it was all ‘their’ fault, as if they had ruled us without our permission. Where were all those who had voted them in?

Where were all those who had put Fianna Fáil in government, election after election, even when it became clear that there was personal corruption going on at the highest level? Until we really face up to that can we really move on?

Swinging a crutch at Bertie is in many ways just a part of that. Like a lot of western politics our politics is now reduced to an X Factor of personalities rather than anything about principle or ideology.

In that category Bertie Ahern was a winner. He certainly had the X Factor when it came to the Irish populace. During the years he was in power Bertie was personally popular to an incredible degree.

He appeared on celebrity chat shows and sports programmes as often as he appeared in a political setting. In that way it has been easy for people to turn on him.

His popularity was very much on a tabloid level, very much something devoid of anything connected to what he believed in politically, so he can be turned on easily, he was simply once a goodie and is now a baddie.

In that way Irish society can swing a crutch at Bertie Ahern, despise what Fianna Fáil did without acknowledging the votes they received and still in response to our present government see Fianna Fáil riding high in the opinion polls.

A bit like Bertie having a crutch swung at him in a pub — it is kind of comical but it is exactly that kind of political incoherence that will leave us stuck forever in the same cycle. Politically it looks as if Ireland has yet to grow up.