FOLLOWING months of rumours among the community in the West Midlands, the owners of the Irish Centre Birmingham have confirmed that the site will close for good in the New Year.

In a statement issued today, owners Paul and Christine Owens, of Westbourne Leisure Ltd, revealed their “sadness” at closing the site, which has been home to the centre for more than 50 years.

They now plan to build a new Irish Centre in Kings Heath, a mile away from its historic home in Digbeth, the city’s Irish quarter.

“After all the rumours over the past months I would like to announce that on January 6, 2020 the Irish Centre Birmingham will be moving from Digbeth High Street to a new site, the former Stadium Club on Wheelers Lane, Kings Heath,” Mr Owens confirmed.

He explained that they plan to build a new Irish Centre, with hotel, bar and conference facilities at the 12-acre site, which they had already purchased.

It will also have GAA facilities.

“Over the past months we have been in discussions with other prominent West Midlands based Irish organisations who work within the community in the hope that they will join us in Kings Heath to build a new Irish Centre that can offer a diverse range of facilities, not just of a social nature, but also including health, sport, leisure, education, retail and other services required by the greater Birmingham Irish community,” he said.

“Now that the site purchase is complete, we can formalise our plans with a view to making further announcements with regards to who will be joining us at the new venue.” 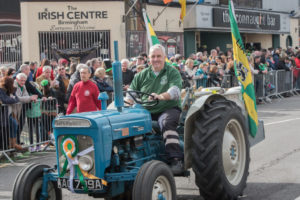 The historic Irish Centre Birmingham has been a focal point on Digbeth's High Street for more than 50 years (Pic: Chris Egan)

Mr Owens acknowledged the move was tinged with sadness, given the long history the current venue has among the Irish community of Birmingham and further afield.

“Obviously there is a sense of sadness and nostalgia leaving Digbeth after 50 years and we’ve all got our own special memories of good times at 'The Centre',” he said, “ but the area is changing rapidly and, despite our best efforts, we could not agree a suitable planning permission to regenerate the present site with the city council."

Community members were similarly sad to hear the news.

Members of the St Patrick's Festival Birmingham committee said of the closure: “We’re very sad to hear the news that Birmingham’s Irish Centre in Digbeth will be closing in January 2020.

“The centre has been an important part of the Irish Quarter for over half a century and we thank all those who have played such a significant role over the years in making the building a home from home for the Irish of many a generation."

They added: "However, we know that Digbeth, and Birmingham, is changing at a rapid pace and as one of the key Irish organisations in the city-region, St Patrick’s Festival is absolutely determined to work with the city council, private developers, funding bodies and cultural partners to ensure the future of Digbeth as the city's Irish Quarter is secured through new investments and new buildings that will draw our community together, whilst offering services and social benefits for residents and visitors of all ages, all cultures and all backgrounds.”

Mr Owens remains confident, however, that the move brings a “tremendous opportunity” to create a new centre for the future.

“I believe this is a tremendous opportunity to develop a new Irish Centre, offering a complete set of services and facilities so that we can attract people of all generations to utilise the premises which we hope will regenerate the new Irish Centre and create a vibrant, sustainable, lasting business model,” he said.

Calling on the community to support those aims, he added: “The success of the new Irish Centre will be reliant on the support of the Birmingham Irish Community and I do hope that you will get behind this venture so that the Irish Centre can have a long, successful future continuing to serve our customers who visit from the local area, different parts of Ireland and from all over the world.”

Anger and concern over permanent closure of Haringey Irish Centre