The monkey's parents, named Norma and Pinky, are part of a European endangered breeding programme, with the park now calling for help from the public in naming the baby.

The new baby spider monkey was born on the 4 March 2022, and this is Norma and Pinky’s third baby together. Mother, Norma, is eleven years old, and she arrived in Fota Wildlife Park in 2015 from Le Bioparc de Doué-la-Fontaine in France. Ten-year-old father Pinky was born at Fota.

The International Union for Conservation of Nature (IUCN) has classified the Columbian black spider monkey as critically endangered due to hunting, habitat destruction and a long birth cycle. Females only give birth every two or three years.

The Spider monkeys recently moved into their new purpose-built house and upgraded outdoor habitat, which features an extended island and a new water moat and waterfall. This project was part-funded by the Government via the Office of Public Works, who also supported other capital projects at Fota Wildlife Park, including the south sea wall repairs and the Howler monkey house construction. 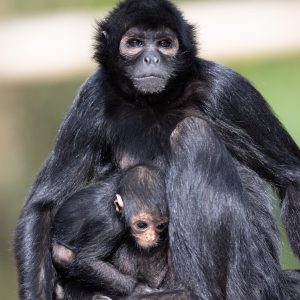 "We are delighted to announce the birth of any critically endangered animal. It helps us raise awareness about species loss in the wild and the conservation work here at Fota. European wildlife parks and zoos run cooperative breeding programmes as a demographic and genetic backup to wild populations.

"We don’t know yet if the baby is a boy or a girl, but there are two big sisters already in the group, Guadalupe, born in 2017 and Blinky, born in 2020. The new baby has been nibbling at fruit and veg and is becoming more active around the recently upgraded Spider monkey enclosure."

The Columbian black spider monkey is a sub-species and is native to Columbia and Panama and has a black body, long limbs and an extremely flexible tail with a hairless tip for gripping that, like a human fingerprint, is unique to each animal.

The Black Spider Monkey is the largest New World monkey and is found in humid forests up to 2,500 metres above sea level. It’s also an arboreal species, spending its time up high in the canopy. It eats a diet mainly of fruit, though it also consumes leaves for protein and has a pot-bellied appearance because of its large stomach.