Blog: Why Celtic fans were right to fly the Palestine flag

GLASGOW, SCOTLAND - MAY 08: Celtic fans celebrate at the end of the match during the Ladbrokes Scottish Premier League match between Celtic and Aberdeen at Celtic Park on May 8, 2016 in Glasgow, Scotland. (Photo by Ian MacNicol/Getty images) *** Local Caption ***

SOMETIMES, mixing sport and politics can produce a constructive cocktail that tastes of enlightenment.

When the line ‘sports and politics don’t mix’ is used to denounce an act of solidarity at a sporting event, it’s often worth looking at the bigger picture before brushing it to one side.

This week, Celtic qualified for the Champions League group stages for the first time in three years with a 5-4 aggregate win over Hapoel Be’er Sheva of Israel, a hugely significant achievement for the club both financially and in the interests of their fan-base.

But it is those supporters who deserve more acclaim than the players (who scraped past a poor team by the skin of their teeth) for diverting attention away from the biggest tie of their season and on to people with much greater needs than their own.

During their home tie in the two-legged play-off on August 17, Celtic fans – led by the Green Brigade supporters’ group – displayed an array of Palestine flags before their Israeli opponents.

This exhibition of fan power was not designed to antagonise the Israeli players or fans in attendance, but to show their support for the oppressed people of Palestine and, more importantly, court the type of media attention that has duly ensued.

A UEFA rule forbids 'gestures, words, objects or any other means to transmit any message that is not fit for a sports event, particularly messages that are of a political, ideological, religious, offensive or provocative nature'.

UEFA immediately began disciplinary proceedings for what they deem a regulation infringement, and so the snowball effect began.

First came the reports of an impending fine for the club, which prompted the Green Brigade to set up a GoFundMe account with the social media hashtag of #MatchTheFineForPalestine so fans could raise the same figure Celtic are expected to incur when the case is heard on September 22.

Not to cover the cost of the fine (UEFA wouldn’t allow fans to pay off a club’s debt) but to, in the Green Brigade’s own words, “make a positive contribution”.

The money raised will be split equally between Medical Aid Palestine (MAP), a UK-based charity which delivers health and medical care to Palestinians worst affected by conflict, and the Lajee Centre, a Palestinian cultural centre in Aida Refugee Camp on the outskirts of Bethlehem. 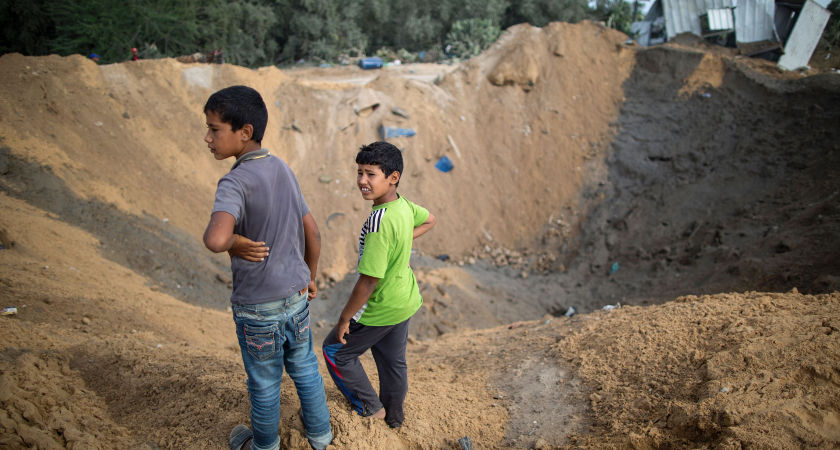 Palestinian children stand next to a crater in Beit Lahia in the northern Gaza Strip, following an Israeli airstrike [Picture: Getty]

Two years since the outbreak of a conflict that has cost the lives of around 1,500 civilians, including 551 children, much of Gaza – a small Palestinian territory on the eastern coast of the Mediterranean Sea – remains in ruins, according to the Association of International Development Agencies.

Entire neighbourhoods remain cut off from water supplies, destroyed hospitals and clinics have not yet been rebuilt, and tens of thousands remain without a home.

As a result of the war and the impact of the blockade imposed in 2007 by Israel, more than 75,000 Palestinians in Gaza still have no home to return to.

The impending fine for Celtic FC is expected to be in the region of £15,000, the GoFundMe account’s original target, but that figure has since been blown out of the water with over £140,000 now raised.

It’s still rising, but how have they attracted over 8,000 donations? Through extensive exposure in the mass media, something the Palestinian struggle rarely gets at the moment.

Literally millions of football fans use social media. The use of a catchy hashtag on Twitter and Facebook has caught the eye of a countless number of people worldwide, prompted thousands to research its meaning and, in turn, enlightened them of a problem that refuses to go away.

That enlightenment has led to donations from fans of clubs from all over the globe, moved by what they’ve been reading of Palestine’s forgotten plight. 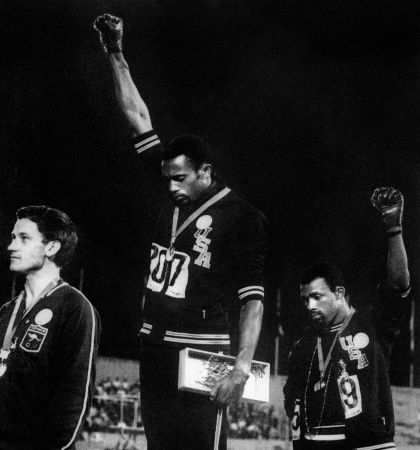 Tommie Smith (C) and John Carlos (R) raise their gloved fists in the Black Power salute to express their opposition to racism in the USA at the 1968 Olympics [Picture: Getty]
A high-profile football match can be used to highlight the wrongs in the world, just as the Olympics were in 1968, or the Rumble in the Jungle in 1974.

It’s important to understand that Celtic’s protest was not anti-Israel, but pro-Palestine.

Of course, not all Celtic fans are on the same wavelength. Some detest the idea of racking up costs for their beloved club, while others feel uncomfortable with protests being brought inside the ground.

They make good arguments, but there’s no denying it’s the best way to maximise exposure, which is what this campaign has been all about.

As supporters of a club that was founded out of charity for victims of the Irish Famine who arrived in Glasgow, Celtic fans have a proud reputation for standing up for the oppressed in all aspects of life.

Sport is more than just sport.