ANIMAL RIGHTS activists are once again calling on Ireland to ban the exportation of Irish greyhounds.

Protestors are desperate to stop dogs being sent to the notorious Canidrome racetrack in Macau.

Macau, a small peninsula in mainland China, is the home of Asia's only legal greyhound racing stadium.

Due to Chinese quarantine laws, as well as high population density, there is no space to breed greyhounds in Macau.

The 'hellhole' Canidrome race ground has a reputation for being the worst place in the world for greyhounds, with campaigner Albano Martins from the Society for the Protection of Animals (Macau) estimating up to 30 dogs are killed there every month.

If a dog is ill, injured or fails to place in the top three in five consecutive races, it is euthanised, which is why animal rights' campaigners say every dog sent to Macau will inevitably meet a premature death.

For many years, Australia was the main importer of greyhounds to Macau.

However, Australia banned the export of greyhounds to China in 2013 after a lengthy campaign by animal rights activists, and now the Irish government are being urged to follow suit.

Greyhound trainers based in Ireland are thought to be profiting from the sale of greyhounds to Macau.

There are currently 20,000 greyhounds bred in Ireland every year according to estimates from greyhound shelter charity, Homes for Unwanted Greyhounds.

In May, Robert Green owner of the Banteer Schooling Track, Co Cork, attempted to export 24 young dogs to Macau.

The dogs were turned away from London's Heathrow Airport, on the grounds that the crates they were being held in were in bad condition and not fit for transport.

Campaigners from Stop Exportation of Greyhounds from Ireland to China say the dogs are being sold for around €2000 each. 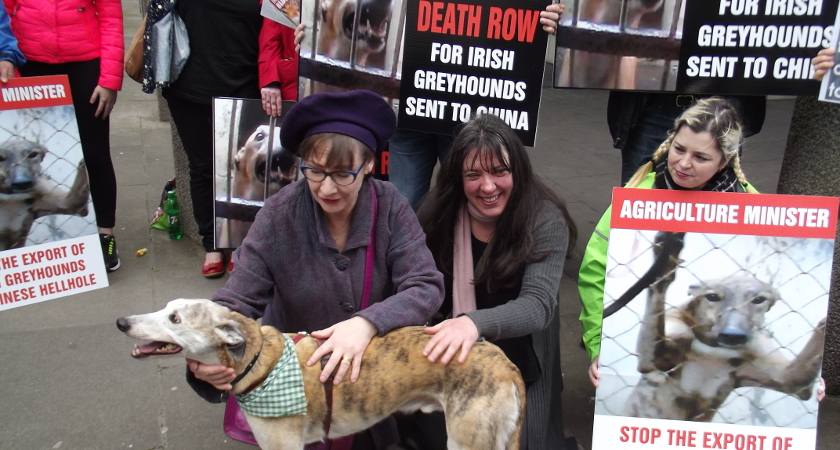 Pauline McLynn joins protestors outside the Department of Agriculture

Christina Hespe, campaigner for No Greyhound Exports, told The Irish Post the problem will only get worse due to the fact that English race tracks are being closed down and the Irish industry supplies them.

Dogs that are not considered fast enough to race in competitive Irish race tracks are still eligible for racing in Macau.

Hespe said: “The dogs that go to the Canidrome are second rate. They used to put them down, now they can sell them to China. It is a good way for breeders to get some money for nothing.”

The campaign to ban the exports of greyhounds to Macau has attracted support from celebrity activists such as comedian Ricky Gervais and former Father Ted actress Pauline McLynn.

McLynn joined Alliance for Animal Rights group outside the Department of Agriculture to protest about the exporting of greyhounds to race in Macau on May 4.

She added: "There's no adoption policy there in China, so when they're sent there, that's it.

"They will have a miserable and awful end to their lives and I just don't think there's any place for that in 21st century Ireland."

Three animal charities in Ireland have also placed pressure on the Irish government to ban greyhound exportation to China.

In a joint letter to the Department of Agriculture, The Dogs Trust, ISPCA and The Irish Blue Cross said: “As a nation we have in recent years attracted adverse international coverage about the welfare of our horses – let us not go down the same route with the welfare of our greyhounds, a noble dog synonymous with Ireland.”

A petition calling on the Irish Government to stop the export of greyhounds to China has been signed by nearly a quarter of a million people from Ireland and around the world.