AN IRISHMAN thought to have been one of the first Irish black taxi drivers to qualify for the trade in London has passed away.

Based in north London, Mr Corcoran began his career as a cabbie in the 1960s, his granddaughter Emily Morris confirmed in a letter published in the Metro newspaper.

“Grandad began his career as a London black cab driver – a job he loved – in the ‘60s and retired almost 50 years later,” she wrote.

“Grandad was the most caring soul, with a fierce sense of humour,” she added.

“He was loved by all who knew him and couldn’t walk down the road without bumping into someone he knew”. 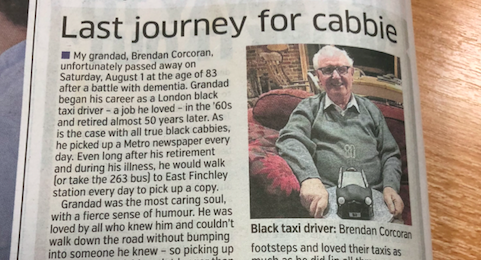 Mr Corcoran, who was a fan of the Metro newspaper, was also once featured in The Irish Post, in his early days in the cabbing trade, his granddaughter goes on to reveal.

“At the beginning of his career he was featured in a newspaper [The Irish Post, I believe] in 1971 to mark him out as being one of the first, if not the first, black taxi drivers from Ireland,” she explained.

“The article questioned whether he would start a trend, and that he most certinaly did – his brother, Phil and son-in-law Michael, followed in his footsteps and loved their taxis as much as he did.”

Did you know Brendan? Please share your memories/tributes with us at [email protected].