Colin Farrell at the European Premiere of Disney's "Dumbo" at The Curzon Mayfair on March 21, 2019 in London, England. (Photo by Gareth Cattermole/Getty Images for Disney)

Irish actor Colin Farrell has revealed a big part of the motivation for taking a starring role in Dumbo was his children.

Holt is making a new life for himself as a circus clown who looks after the elephant with his two children.

When the family discover that Dumbo can fly, entrepreneur V. A. Vandevere (played by Michael Keaton) swoops in to make the elephant a star for Vandevere's circus in Dreamland. 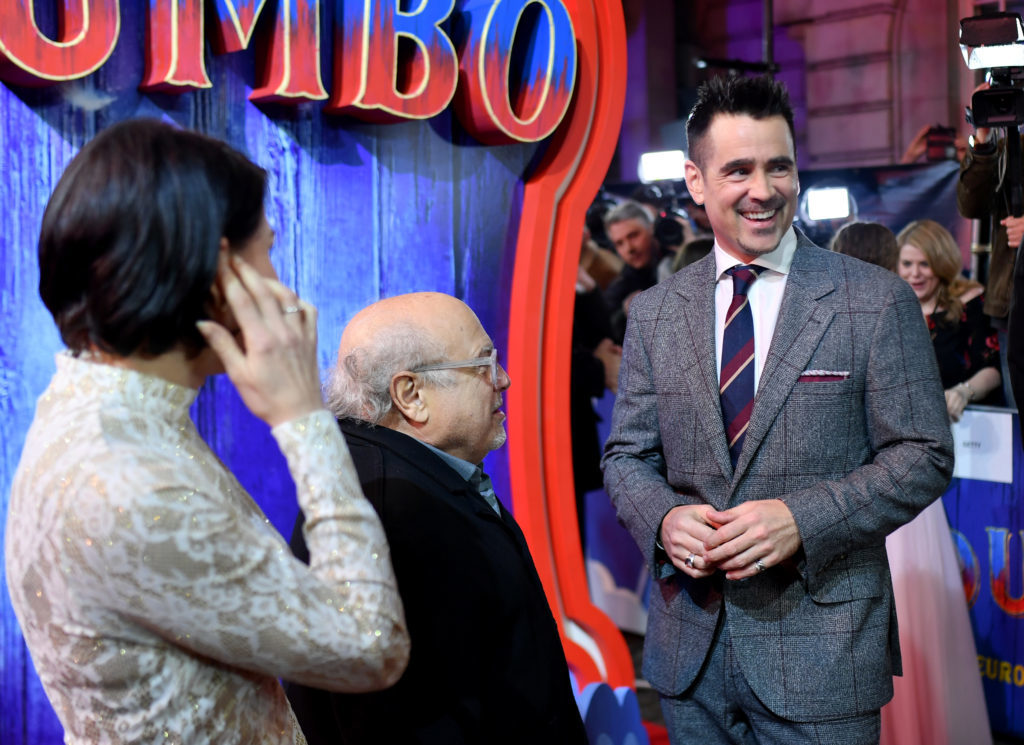 Danny DeVito and Colin Farrell attend the European Premiere of Disney's "Dumbo" at The Curzon Mayfair on March 21, 2019 in London, England. (Photo by Gareth Cattermole/Getty Images for Disney)

And it was the family appeal of the film that made a big impression on the Dubliner.

Farrell said: “It’s nice to do something that’s orientated towards families and towards kids, it was really nice.

“I’ve only done two jobs in 20 years that both my boys could see. My sons are 15 and nine and they could see Fantastic Beasts. Well, James can see other stuff now, not quite Sacred Deer or anything – I don’t want to traumatise him.

“But this more than anything is orientated towards families and towards kids and their parents, and so it’s really lovely to be part of something that has such a communal spirit as this does.”

Between them, Burton and Farrell have been involved in some of the biggest movies released over the past 25 years.

It is unusual that their paths haven’t crossed prior to this film, but Farrell is glad the pair have now rectified that.

“I’ve just been such a fan of Tim’s work for the longest time,” he said.

"I think Edward Scissorhands is probably the first thing of his I saw. It’s still one of my favourite films of all time.

"The idea of something as sweet and fantastical and almost otherworldly while being grounded in some recognisable world that we can relate to under the directorship of him is kind of a dream.”