LABOUR MP Conor McGinn has called on the Prime Minister and her Government to reveal everything they know about the Loughinisland Massacre.

Mr McGinn, who is also Chairman of of the All-Party Parliamentary Group on the Irish in Britain, has urged Theresa May to ensure the families of the victims of the 1994 attack, which left six people dead, get the truth and justice they deserve.

The killings happened in the village of Loughinisland in County Down on June 18, 1994, when loyalist paramilitary gunmen burst into The Heights Bar.

They shot dead six men and left five others wounded.

The pub was packed with people watching a televised Ireland v Italy match during the 1994 World Cup.

The six dead included 87-year-old Barney Greene, one of the oldest people killed during the Troubles.

In June Police Ombudsman for Northern Ireland Dr Michael Maguire published a report on the massacre, which found "fundamental failings in overall Loughinisland investigation" where, despite having names of those suspected to be responsible within 24 hours, there was a "significant delay" in arresting them.

In conclusion, Mr Maguire stated: "When viewed collectively, I have no hesitation in saying collusion was a significant feature of the Loughinisland murders."

This week Mr McGinn, the MP for St Helens North, told The Irish Post: “The new Prime Minister and the Secretary of State have an opportunity to progress this crucial agenda and show that the Government is committed to openness and transparency about the role of the State during the course of the conflict.

"After being subjected to over 20 years of frustration and the denial of truth, the families of those murdered at Loughinisland need full disclosure and accountability." 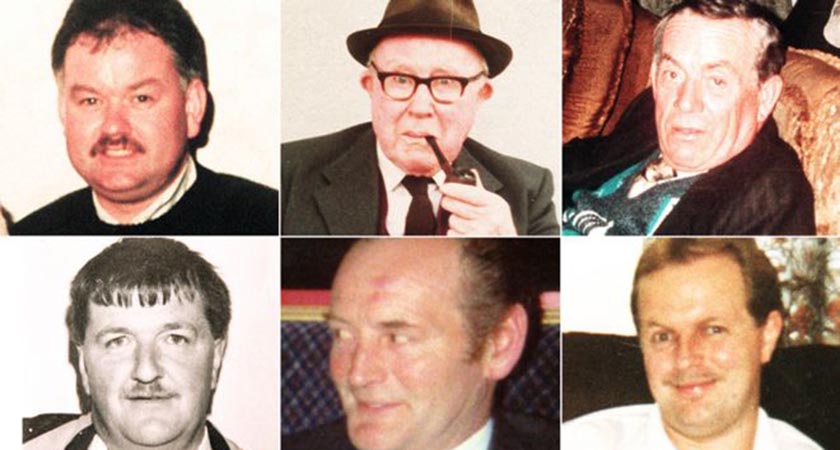 The six victims of the Loughinisland Massacre (Source Creative Commons)

While the 160-page report confirmed allegations of collusion between the Royal Ulster Constabulary (RUC) and the Ulster Volunteer Force (UVF) killers, it also revealed police informants at the most senior levels within loyalist paramilitary organisations were involved in importing guns and ammunition used in the killings.

Mr McGinn, whose father was a former Sinn Féin councillor, discussed the report and what action should now be taken with Mr Murphy.

Mr Murphy is a partner at Belfast-based KRW Law, which specialises in human rights law and acts on behalf of many of the families of those killed or affected by the Troubles.

The Labour MP added: "Dr Maguire's report is shocking and disturbing. It outlines cases of direct collusion before the murders, and the subsequent and deliberate obstruction of justice after the murders.

"These revelations once again show the need for a comprehensive process to deal with the past and the legacy of the conflict in Northern Ireland."