shares 1.1k
Share this article:
DUP leader and First Minister Arlene Foster has insisted she will not be stepping down despite the party's poor results in yesterday's General Election.
In a tight contest centred around both remain and pro-Brexit camps, both Sinn Féin and SDLP scored landmark victories across Northern Ireland, as the DUP lost two seats.
In a watershed election with electoral pacts between pro-remain parties, nationalism is set to out-number unionism for the first time in MPs, reversing an historic trend.
'Green' parties now outnumber 'orange' ones, by 4 seats to 1 in Belfast, as the DUP loses its 'kingmaker' status in London, with a likely border down the Irish Sea.
The final toll of the parties was DUP 8 (-2), Sinn Féin 7, SDLP 2 (+2), and Alliance 1 (+1).
Dramatic results included the election of Sinn Fein's John Finucane in North Belfast with a majority of 2,000 over the DUP's deputy leader Nigel Dodds.
Mr Dodds led the party's pro-Brexit strategy with Prime Minister Boris Johnson at Westminster.
Mr Finucane's solicitor father Pat was killed in 1989 in one of the most controversial murders of the Troubles and his son's election is a major triumph for the party.

DUP Westminster leader Nigel Dodds reacts after losing his seat to Sinn Fein candidate John Finucane (Pic: Getty Images)
Speaking to the Irish Post the new North Belfast MP said: "My victory is for remain, and that victory has been amplified tonight across Belfast.
"It's for others to decide if this is the greatest tribute to my father's memory. But I'm very proud."
The SDLP returns to Westminster with two seats, with party leader Colum Eastwood wrestling back the Foyle constituency from Sinn Féin with a huge 17,000 majority.
The party also took back South Belfast with a startling 27,000 votes, new MP Claire Hanna insisting "we will deliver on the promise of the Good Friday Agreement".
Sinn Fein leader Mary Lou McDonald pointed to the impact that the vote will have on efforts to return government to Stormont.
"We want the DUP to come and step into power-sharing to the rest of us" she told the Irish Post.  "we hope that this will be one of the consequences of tonight." 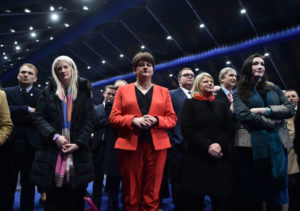 DUP leader Arlene Foster watches on as Sinn Fein candidate John Finucane is declared the winner of the north Belfast seat over DUP candidate Nigel Dodds (Pic: Getty Images)
The dramatic night for the DUP came as Boris Johnson's Conservative Party secured its largest majority since 1987 - meaning it no longer needs the 'confidence and supply' deal agreed by former Prime Minster Theresa May and Arlene Foster following the General Election of 2017.
The Conservatives won a series of victories in Labour heartlands in the north of England and Wales.
In the Vale of Clwyd, Dr James Davies won the seat back for the Conservatives by 1,827 votes over incumbent Labour MP Chris Ruane.
Mr Ruane, the son of an Irish navvy, former chair of the All Party Parliamentary Group on the Irish in Britain and long-term champion for the Irish community in Westminster, had won back the seat in 2017 after being beaten by Dr Davies following a shock election result in 2015.
However the current Chair of that APPG group, Conor McGinn has retained his seat as Labour MP for St Helens North.
The Armagh-native, a former chair of the Labour Party Irish Society who was first elected in 2015, thanked voters this morning, stating: "Thank you to people across St Helens North for electing me for the third time as your Member of Parliament.
"I am so honoured to represent and be rooted in our resilient, proud and welcoming community I will keep working for all my constituents in every part of the constituency."