ON Saturday, November 21, the GAA will stage the Leinster football final at Croke Park in Dublin.

This fixture will be noticeably different from any other at the home of the GAA as it will also mark the 100th anniversary of the darkest day in Irish sporting history.

The match will be preceded by a special ceremony to remember the 14 people killed at Croke Park in Sunday 21st November 1920.

On that fateful day, British Crown Forces attacked fans and players during a Gaelic football match between Dublin and Tipperary in what became widely known in Ireland as Bloody Sunday.

The events are recounted in chilling detail in a new podcast series, The Bloodied Field, created by Irish sports journalist, Michael Foley.

“They killed fourteen people,” he explains.

“The victims included one player, three children and one woman due to be married the following week. Instead, she was buried in her wedding dress.

“The impact on all fourteen families was life changing. The impact on Ireland helped change the course of its history.”

We spoke to former President of Ireland, Mary McAleese, who served in the role from 1997 to 2011.

“The story is so important. It's part of who we are and a part of what has made us who we are,” she said. 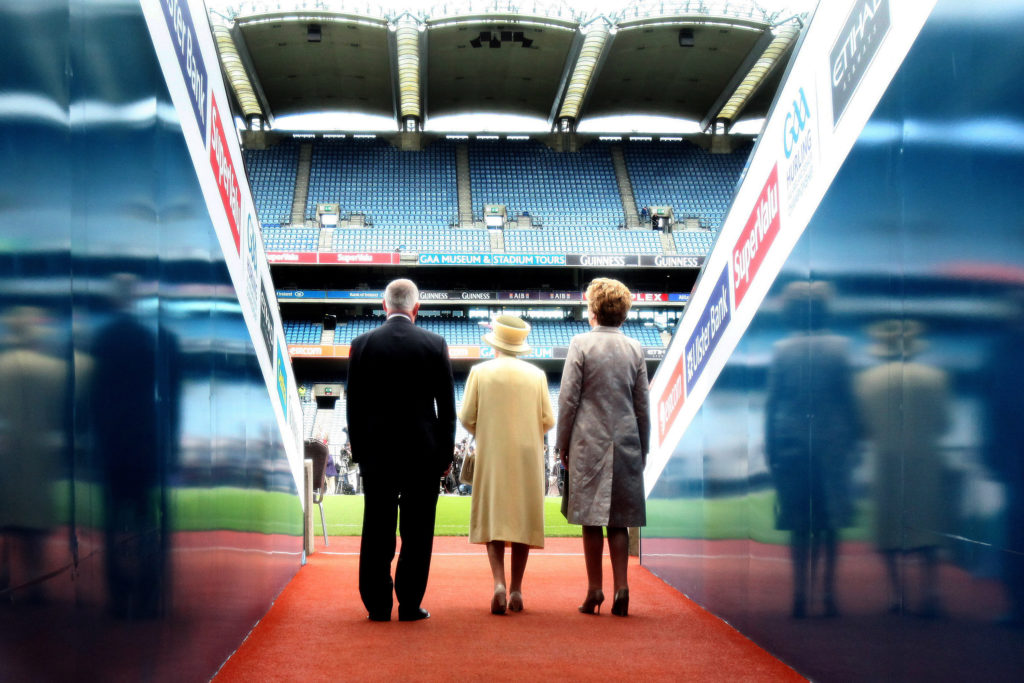 Irish President Mary McAleese (R), Queen Elizabeth II (C) and Christy Cooney (President of the GAA) during a visit to Croke Park on May 18, 2011 in Dublin, Ireland

For Foley, it is also a story Irish people “think they know” but much of what happened on Bloody Sunday has been distorted and forgotten over time, with eight of the Croke Park victims resting in unmarked graves until very recently.

Foley’s 2015 research into the tragedy led to the creation of the GAA Bloody Sunday Graves Project, which has resulted in each victim receiving a proper headstone.

“A lot of these families have held these stories for a century. They’ve never really been asked to tell their story and when they’ve gone to try and tell someone their story, like getting in touch with the GAA, they haven’t been heard, but now they have this opportunity and its great coming into the centenary.”

The massacre at Croke Park took place during the Irish War of Independence.

The day of violence began early on Sunday morning when IRA leader Michael Collins organised the assassination of 12 members of the ‘Cairo Gang,' a team of British undercover agents working in Ireland.

Tension was high across the city and the GAA considered cancelling the fixture, but it went ahead anyway with around 5,000 fans attending.

At around 3.30pm that afternoon, British troops arrived at the stadium under orders to search for armed IRA volunteers, but they entered the stadium and quickly opened fired on fans and players, causing a stampede for the exits.

The dead included Jane Boyle, who had gone to the match with her fiancé.

They were due to be married five days later.

“They certainly had no power that day to go on and do what they did, and in doing that, of course, they inflame the passions, the very passions that were always going to result in them leaving Ireland,” she added.

By the end of the day over 30 people had been killed across Dublin.

The British government responded to Bloody Sunday by covering up the truth of what happened at Croke Park.

Their official investigation was not published for 83 years.

Around the world, the reputation of the British Empire was further tarnished with some media reports comparing Bloody Sunday to the Amritsar Massacre in India. Within a year, Britain had signed the Anglo-Irish Treaty and Ireland took its first step towards political independence.

In 1926, the GAA named a stand after Michael Hogan.

He became Ireland’s most celebrated sporting martyr, but the other victims faded from view and outside of his own county of Tipperary, Foley says, very little is known about Hogan to this day.

“I thought it was important to get to the reality of that guy,” he explained.

“We know him as this sporting martyr. How can we relate to a martyr? We need to humanise these people, we need to get to a point to identify why they were there and what they would have been going through and that will help us understand better what happened.”

Foley’s focus on the stories of the innocent victims has helped shape the tone of this weekend’s commemorations, which has enabled the GAA to reconnect with the victims’ families and engage with Bloody Sunday as a human tragedy, rather than one that could be exploited for anti-English sentiment. 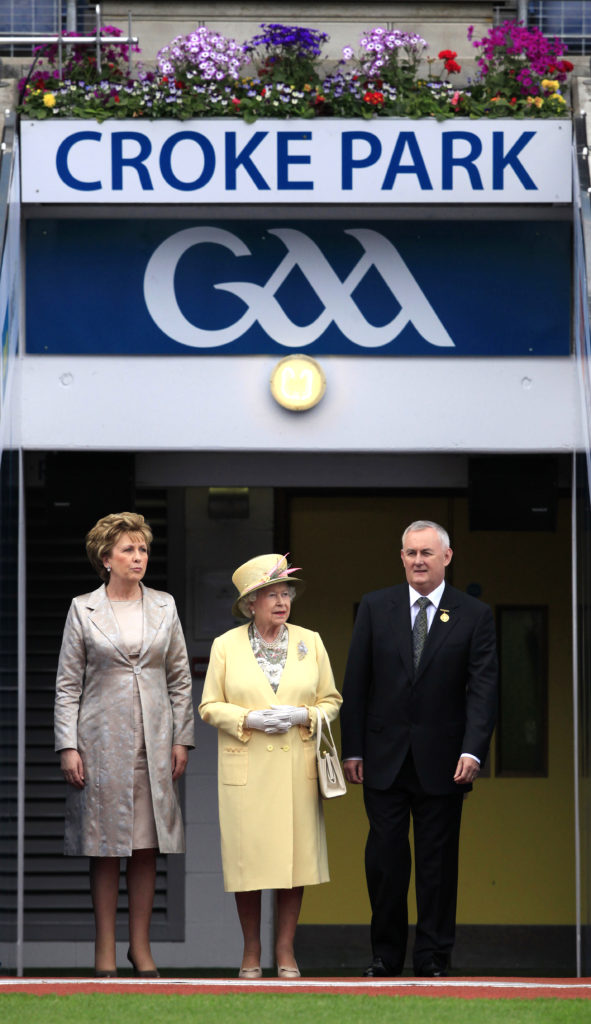 Queen Elizabeth II walks out from the player tunnel with Irish President Mary McAlesse and GAA President Christy Cooney, at Croke Park stadium in Dublin, on May 18, 2011

While in office, Mrs McAleese played a central role in the Irish Peace Process, which included hosting a State visit to Ireland by Queen Elizabeth II in 2011.

“The fact she had never set foot in the Republic before was absolutely historic. And importantly she didn’t just come on what I might call a routine state visit,” the former president explained.

“She came on a quiet pilgrimage of reconciliation. It was a gesture of good neighbourliness and it was a promise for the future, where she said we’re not going to be bound by the past.”

McAleese, who describes herself as “more GAA than Catholic”, ensured that Croke Park was added to the Queen’s itinerary.

“She and I, along with Christy Cooney, then president of the GAA walked on to the pitch,” McAleese recalls.

They looked up to the Hogan stand and Christy explained the circumstances in which Hogan and 13 fans died. It was, McAleese said, “one of the most poignant moments of her visit”.

“The Queen looked to me like she would have been on the verge of tears. She was very moved and she very quietly said “I know, I know”.

“And she did. She had done her homework, she’s terribly well versed in Irish affairs and she knew the story very well.”

Witnessing this reaction from the Queen was another important moment for the GAA to reconcile with Perfidious Albion.

By agreeing to the visit, they doubled down on arguably their most enlightened decision in 2005 to allow rugby and soccer to be played in Croke Park.

Judging by the letters she received, even from some die-hard republicans, McAleese said it helped “cut the cord to hatred”.

And while the British media will pay scant attention to the commemorations at Croke Park, it is an opportunity for more British people to follow their Queen and acknowledge one of the worst atrocities that occurred during British colonial rule in Ireland.

The innocent victims that day were fans and players who went to a football match and never came home.

One hundred years on, it’s a story all too familiar to English sports fans, one they can surely understand and empathise with.

The victims who died at Croke Park on Bloody Sunday:

Daragh Minogue is Associate Professor of Communications at St Mary’s University, London. Myles McDevitt is a writer for sports.gazette.co.uk. The Bloodied Field Podcast is available on Spotify.