A DONEGAL man is gearing up to release a single to raise funds for those caught up in the violence in Gaza.

Following in the footsteps of Irish singer Bob Geldof, John Cutliffe plans to raise as much money for the cause as possible.

The inspiration for the song all began with a smile.

John and his wife had been living in Jerusalem for two years before leaving in June.

However, watching the harrowing scenes on the news inspired them to go back. Now, they divide their time between Gaza and their houseboat in Brentford.

“When Gaza started to get bad we decided to go back. My wife had worked in Gaza for four years and wanted to get back in and help her team,” John explains.

“While she was in Gaza I spent every day visiting Gaza patients in Palestinian hospitals in East Jerusalem. We saw so pretty horrific injuries and met a lot of beautiful people who will stay in my heart forever.”

One particular person who will stay in John’s heart forever is a young girl called Shyma. 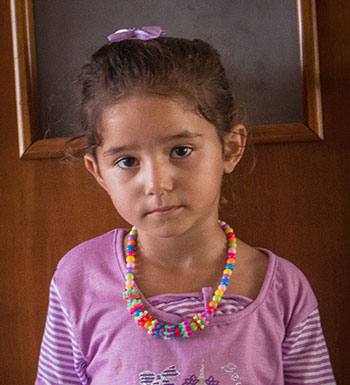 Shyma on the day she was traveling back to Gaza

At just four years of age, Shyma had lost most of her family in an explosion. John turned out to be the man who made her smile for the first time since her loss; a memory than will remain with him.

The following morning, he put pen to paper and came up with the skeleton of the song.

“The melody of the verse was there and Shyma’s ‘smiled’ lyric but very little else, just a feel for what it should be,” he said.

From this initial brainwave, he took things forward. He enlisted the help of his friend and fellow Donegal man, Rory Gallagher.

John sent the bones of the song to Rory who helped to finish it.

Once it was complete, the pair set about recruiting a team of vocalists for the project.

It did not take long to rally the troops and home-grown talent from Hothouse Flowers’ Liam Ó Maonlaí to Muireann Nic Amhlaoibh from Danu signed up.

Also on the recording are choir members from Jerusalem and a variety of other performers.

The project follows in the footsteps of this year’s re-recording of the 1984 Christmas classic Do They Know It’s Christmas? which was led by Bob Geldof.

Also battling it out for charity single of the year on Irish shores is TV and radio presenter Síle Seoige’s effort, Maybe This Christmas.

The festive season is certainly a time to remember those who need our help the most and, it seems, this year’s charitable efforts are very much Irish led.