AN IRISH Guide Dog has suffered a “mental breakdown” after a spate of firework use in a residential Dublin neighbourhood.

As part of an appeal calling on the public to be mindful of the impact of fireworks on working dogs and their owners, Irish Guide Dogs for the Blind has shone a light on the experience of Ulla Quayle and her Guide Dog Sage.

Illegal fireworks are having a devastating impact nationwide on Guide and Assistance Dogs and their owners according to Irish Guide Dogs for the Blind.

In the case of Ulla, it’s left both her and her Guide Dog Sage facing an uncertain future.

“In a matter of weeks, my Guide Dog Sage has had a mental breakdown from the nightly bombardment of fireworks being set off near my home area,” she said.

It’s a situation that has left Sage a shell of the dog she once was.

“I’m devastated as I don’t know if she will be able to work again due to post-traumatic stress. She is terrified and is unable to leave our house. I’ve lost my Guide Dog until at least Halloween.”
Despite the uncertainty surrounding the Guide Dog’s condition, Ulla is optimistic that she will eventually get back to some semblance of her old self.

“Sage is now staying with a dog behaviourist who is working to desensitise her to fireworks. Hopefully she can get her over this and get back working again.”

“Most people are aware that fireworks can be upsetting for any animals but particularly working dogs such as Guide or Assistance Dogs,” he said.

“Most dogs will cope with a degree of stress in their lives. Sometimes however a dog has an experience that goes beyond that, such as a firework exploding too close to it.

“This sensitises the dog to a disproportionate degree, like PTSD in humans.Thereafter, they are unable to cope with even a normal amount of the stress experience.

“They may recover after the firework season to varying degrees but are now in a state whereby over-reaction to unexpected noise has created a fear reaction.

“Even if that noise is far away. The dog’s ability to cope is now critical. In some cases, it can end a dog’s working life leaving their owner without a dog which means they lose their independence and mobility.” 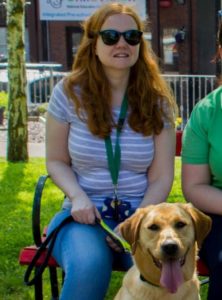 With more fireworks displays expected over the next few weeks to come, Irish Guide Dogs for the Blind has offered up a list of tips to help owners protect their dogs.

1. Dogs do not like fireworks, so ensure to get plenty of exercise before dark – ideally during school hours or at meal times. This will minimise the exposure and tire the dog so that they will be more relaxed and more likely to sleep through the evening.

2. After dark dogs should be kept indoors as much as possible.

3. Confine pets to the general living areas rather than quieter areas such as hallways or bedrooms.

4. Leave the radio and TV on to drown out some of the external noises. Pull your curtains to help reduce visual exposure to fireworks.

5. Do not scold or fuss over a nervous dog as this only exacerbates the situation and can reinforce the behaviour.

6. If a dog is particularly stressed, we recommend treating them with natural remedies available from vets and pharmacies.

7. Remember, no tricks and no treats for your dog. Chocolate is not safe for your pet so do not share any with the dogs.