Dublin Zoo has unveiled its newest habitat - the Himalayan Hills. Inspired by the natural habitat of red pandas and snow leopards in the wild, the Himalayan mountain range, the new area will reflect the look and feel of a Nepalese Village. With its colourful roofs and prayer flags, visitors will enjoy an immersive experience as part of the themed eco-region, with breath-taking views of the elusive snow leopard prowling through a stunning new habitat of sloping rocky terrain or the red panda exploring the elevated woodland habitat. To book your visit go to dublinzoo.ie. Pictured in the new habitat Red Panda Jinpa. ©Patrick Bolger

DUBLIN ZOO has unveiled its newest habitat the Himalayan Hills, inspired by the natural habitat of red pandas and snow leopards in the wild.

The new habitat will reflect the look and feel of a Nepalese Village with colourful roofs and prayer flags, leading visitors to enjoy an immersive experience as part of the themed eco-region.

Visitors will venture to the highest point of the Asian Forests, to enjoy views of the elusive snow leopard prowling through a new habitat of sloping rocky terrain. They can then observe a red panda exploring an elevated woodland of carefully placed trees and logs to do what they do best – climbing!

The relocated and expanded habitat was designed with the red pandas’ tree-dwelling lifestyle in mind. Large broad-leafed evergreen trees will provide much stimulation for the arboreal red pandas, where they can be seen traversing the canopy branches of their elevated forest habitat.

Voted by visitors as their favourite animal at Dublin Zoo, red pandas are listed as Endangered on the International Union for Conservation of Nature (IUCN) Red List. Native to high-altitude bamboo forests in the Himalayas, one of their main threats in the wild is habitat loss. Since 2015, Dublin Zoo has provided support to the Red Panda Network and their Forest Guardian programme in Nepal.

Known for their beautiful silver, white and black fur and green eyes, the snow leopard is also listed as Vulnerable on the IUCN Red List. In the wild, they face threats of poaching and habitat loss. In 2009, Dublin Zoo began working with the Snow Leopard Trust, the leading authority on the study and protection of snow leopards. The funding from Dublin Zoo is going towards five ongoing, sustainable and community-driven projects in Mongolia, India and Pakistan. 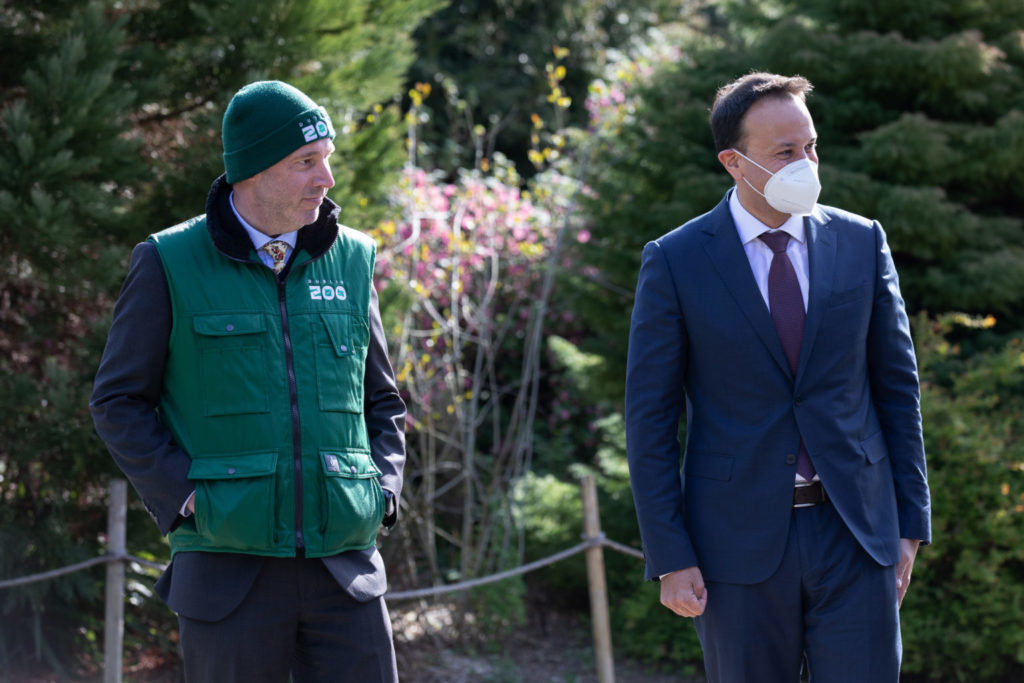 Pictured at the opening of the new habitat is Tainaiste Leo Varadkar T.D. with Christoph Schwitzer, Director of Dublin Zoo. ©Patrick Bolger

"This is a brilliant new facility at Dublin Zoo, visitors and families will love it. I got to see work underway on the new red panda habitat last year when the Government announced €2m in special funding for the Zoo, following some difficult years for the zoo in the pandemic. It’s great to be back to see the finished project, especially with its strong focus on conservation, both in the Zoo and in the red panda’s natural habitat in Asia."

"The red panda and snow leopard habitats are a fantastic addition to existing habitats including the African Savanna, Sea Lion Cove and the Wolves in the Woods. Dublin Zoo had a place deep in my heart as a child. The children of today and the future will have even more to see when they come here."