THE RELATIVES of the 13 unarmed people killed on Bloody Sunday in Derry back in 1972 have pledged to continue their fight for justice.

It comes after Northern Ireland's Public Prosecution Service (PPS) stood by the decision reached last year to charge just one ex-soldier over their role in the massacre.

On January 30, 1972, soldiers from the Parachute Regiment opened fire on 26 unarmed civilians during a protest march against internment without trial.

A total of 13 people lost their lives that day, while a further 15 were injured.

In March 2019, the PPS announced that just one veteran, known only as Soldier F, would face criminal prosecution.

Some of the victims’ families requested a review of the PPS decision.

While they have been left disappointed by the results, with the PPS standing by the decision, they have vowed to continue the fight with a Judicial Review.

John Kelly’s brother Michael was killed on Bloody Sunday and he has vowed that he “will not stop” until he gets justice for him.

"We're not giving up yet, we have now the next stage, the judicial review at the High Court," he said.

"It's been a long road, up to nearly 50 years, we're all getting old, a lot of people are dying but as long as we're able to walk, we'll go after them and we certainly will not stop until we see justice for our loved ones.

"Every one of them should face the wrath of the law."

He added: "Over the years we've had many kicks in the teeth, but I think most of us have still got full sets of teeth and we're not giving up, we're never giving up on it." 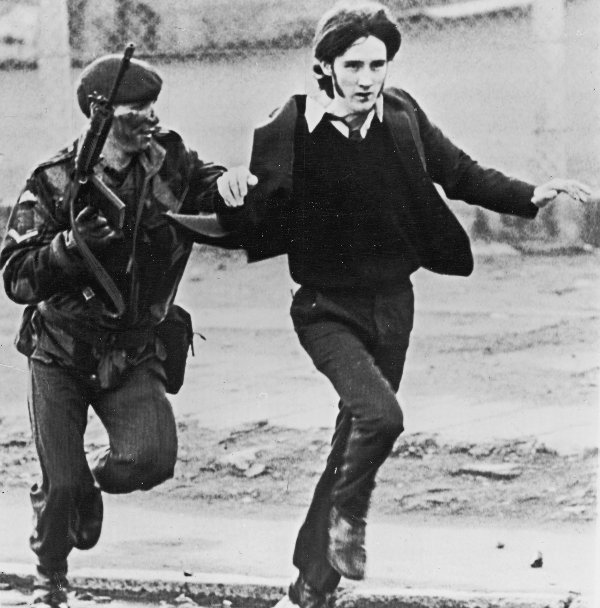 A British paratrooper takes a captured youth from the crowd on 'Bloody Sunday'. Photo: Getty Images

Foyle SDLP MP Colum Eastwood has also pledged to do everything in his power to help the families of those killed in their pursuit of justice.

He praised that for showing "the most unshakeable dignity and integrity in moments of justice as well as moments of disappointment".

"Today's decision will not change that," he said.

"I am pledged to do all I can to support these families who mean so much to Derry. We'll continue to walk with them."

The reviews of the PPS decisions were undertaken by senior assistant director Marianne O'Kane.

She concluded the test for prosecution was not met on evidential grounds to prosecute any of the 15 soldiers in connection with the specific deaths or injuries sustained on January 30, 1972.