THE DESPERATE family of a terminally ill man has thanked the London Irish community for helping to pay his £45,000 medical bills.

When cancer-stricken Tim O’Donoghue heard about a make-or-break surgery in Germany that could save his life, his father Mick took out huge loans to fund it.

But even though doctors were unable to perform the operation, the O’Donoghue family was left scrambling to pay off its debts.

“My son came to me saying that this is life or death and we were desperate,” Mick O’Donoghue told The Irish Post. “We were absolutely convinced right up until the moment of the surgery that this was going to be a new beginning and it was all going to be okay.”

But when surgeons examined the father-of-two last month, they discovered that his cancer has spread and could not perform the operation.

Mr O’Donoghue said the news sent his son into “a very dark corner” after what he describes as an “unbearable” year.

“Tim is not dealing with this well at all since we got back,” added his father, who has family roots in Co. Clare.

“The mental side of this is pure agony and torture. He is in bits over the fact he may not be around for when his two lovely young kids grow up. Tim gets very emotional all the time and trying to find words to comfort him is hard work.”

Since being diagnosed with a very rare form of bile duct cancer in January, 34-year-old Tim has been ravaged by intensive chemotherapy.

He has also had to give up his business as a self-employed electrician and sell off his van and tools to help pay for the surgery in Germany after British doctors refused to operate. 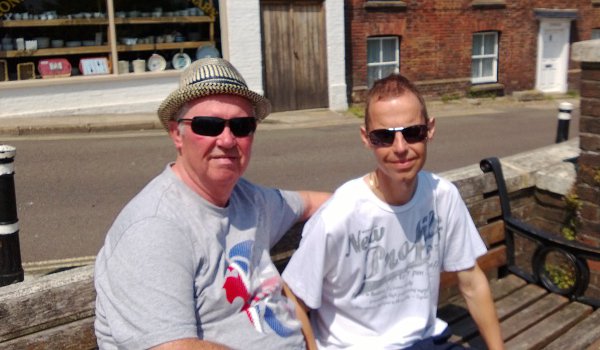 Tim’s father said they had been struggling to pay off the £45,000 debt on their own.

“I am a self-employed asbestos surveyor,” the 63-year-old explained. “I used to get a lot of work one time, but not anymore – I have only had one job in the last four weeks.”

But local people have helped the O’Donoghues to bridge the gap.

As well as the £22,800 donated online, more than £8,000 was raised last month when the large Irish community at the family’s local parish rallied around them.

The fundraising drive was organised by the Church of St Gabriel’s in Archway, where Mr O’Donoghue, his wife Michelle and their children Archie, 7, and Holly, 4, are mass-goers.

“It is very sad that there is a possibility that a family could be left without the father at a very important time with two young children,” he added.

“And it is distressing not to be able to do very much, but at least we could raise some money.”

Now, following a benefit night organised by friends and family at St Joseph’s Parish Centre, the family believes it has raised enough money to fully pay-off its debts.

Around £12,000 was collected from the 300 attendees on the night, which had an auction of football memorabilia as its main event.

The most valuable item was a Brazilian shirt signed by footballing legend Pelé, which fetched £850.

Mick said it had been an “overwhelming” experience for his son, who was only able to attend for an hour and a half.

“There were lots of people coming up to him non-stop wishing him all the best and the best for his family,” he added.

“Tim is incredibly grateful to everyone, but what he really wants is to have his life back the way it was.”