It was a little bit of a hit-and-miss week in the lead-up to my first visit to the Ayr Gold Cup in my first season as a flat jockey.

I had no joy the previous Saturday at Musselburgh before flying back to Ireland for the Curragh where I ran well on Parnassian. I finished tenth of 30, being beaten by two and half lengths.
I thought I ran a cracker but it all got a little bit hampered. I thought I would have been a bit closer but I was still pleased with that.

Then I was back at Kempton on Monday and ended up stopping over before driving over to Yarmouth to ride out the next morning. I got to the track about 2.30pm, walked in the gate and saw a load of press outside the weighing room, so I knew something was up.

An announcement came overt the Tannoy saying the track had passed inspection but that unfortunately the last race on the card – my race – would be abandoned, apparently due to a wet area near the four-furlong pole.

I couldn’t believe it. I thought someone was having a joke – the hottest the day of the year and the one race I’m in is abandoned because of water on the track. I heard later a water pipe had leaked and the biggest patch was at the four-furlong post so they had to abandon the five-furlong race.

It’s annoying for trainers and owners as well. Paul Midgley has had to get a member of staff to leave North Yorkshire with Silvanus in a horse box on a 10-hour trip only to have to bill the owner for staff time and diesel.

The course owners ARC will refund horse owners £250 but that won’t make a lot of difference with the diesel costs after paying the tax on it. The Professional Jockeys Association were able to get £50 from ARC to give to any jockeys who were down just to ride in that race. It’s better than nothing but again by the time I pay my tax on that it won’t go far.

But when it comes down to it this is only a game, so hearing that Neil Mulholland’s sister Kiera – both of whom I’ve known since I was about 12 – has been diagnosed with Thyroid Cancer puts things in perspective. 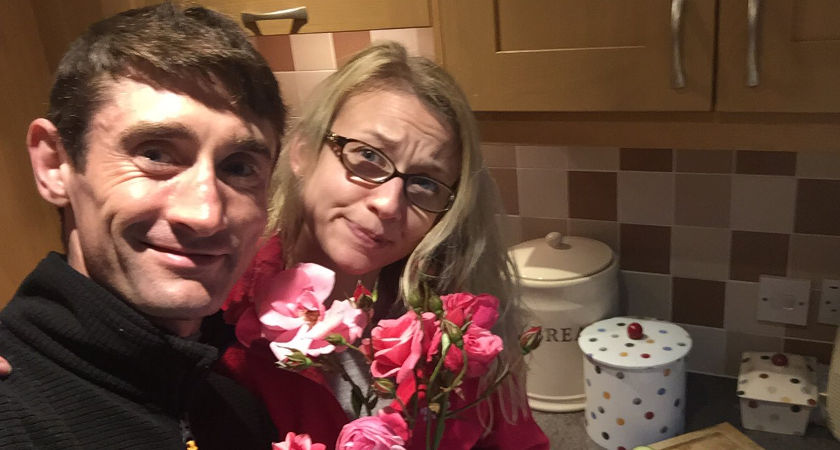 My wife Aimee is raising money for Cancer Research UK

As I say, this is only a game but it’s a very tight-knit family within that game. When something like this happens, or like when Tom O’Ryan sadly passed away recently, everyone pulls together. I think there were 300-400 at Tom’s funeral last Monday paying their respects.

So it’s great to see my wife Aimee and all the girls raising money for Cancer Research UK by pledging to walk, run or cycle five miles a day for their ‘10,000 Steps for Keira in September’ campaign. The girls are very tight friends and what they’re doing is unbelievable.

When one gets sick like Kiera, or one friend has a bad spell in their personal life, they all seem to get a bit tighter. They all pull together – even when one of us lads get injured, the girls always round up and try and help as much as possible.

Or when one of the girls is pregnant there always seems to be bags of clothes being sent and what have you. There’s always support and I’m very proud of what they’re doing.

My wife is pregnant and is due in February so the 10,000 steps is helping her that way as well. Although between me bringing the dog for a run and the wife bringing him for a big long walk, I think the dog is getting very p***ed off!

Joking aside, I personally think that racing itself can do a lot more for charity. We have a lot of big festivals where we could be doing something, for example the Cheltenham Festival is on when Children in Need is on, but we never seem to take part in that.

Maybe that’s something we need to implement.

The Jockey's Journal: Winning on an all-weather surface and an apprentice to look out for