GARDAÍ in Co. Offaly have seized seven animals after distressing footage of a donkey being dragged by a car was posted online.

The animals were seized on Friday night in Edenderry after the footage was shared by animal welfare campaigners earlier that day.

Investigators have urged anyone with information to contact them as animal welfare groups condemned the incident.

The shocking footage was captured by a volunteer with My Lovely Horse Rescue, with the animal welfare organisation describing it as an 'awful act of cruelty'.

The video showed a car on a grass verge adjacent to the pavement, dragging the donkey by a piece of rope that had been tied around its head.

The animal can be seen struggling against the pull of the vehicle as it makes its way down the road and as well as appearing to slip several times in the icy conditions. 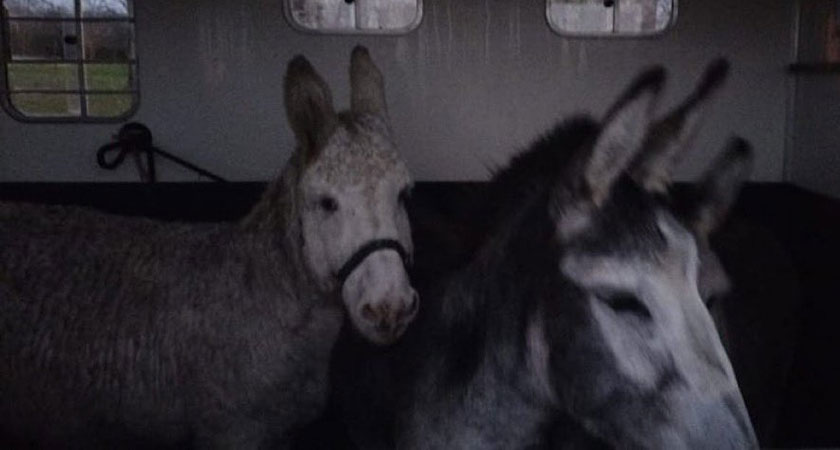 The donkey was one of seven animals seized by investigating gardaí (Image: Twitter / @GardaInfo)

The person recording the footage can be heard appealing for the driver to stop the car.

After the footage was posted online, gardaí from Edenderry revealed they were investigating an incident under Section 12 and 13 of the Animal Welfare Act.

In an update on Saturday morning, they added: "Seven animals have been seized overnight by Gardaí in Offaly as part of an ongoing investigation under the Animal Welfare Act."

My Lovely Horse Rescue and fellow animal welfare groups The Donkey Sanctuary and HungryHorse Outside assisted gardaí with the seizure.

In an update, the latter organisation revealed they were now caring for the animals.

"Many of you have heard of or have seen the horrendous video circulating social media platforms concerning this beautiful donkey being dragged behind a car in Offaly yesterday," read a statement from HungryHorse Outside.

"This donkey, together with his six companions, are now in our care thanks to the local gardaí in Edenderry.

For anyone concerned about the donkey being dragged by a car in the video shared yesterday afternoon, we can confirm that we assisted with the seizure of this animal, & 6 others. Edenderry Garda ask witnesses to contact Tullamore Garda Station on 057 932 7600 pic.twitter.com/aLUGGtSDX4

"Our team worked well into the night and morning with the help of The Donkey Sanctuary to secure their safety.

"He has been seen and treated by a vet and we are hopeful for brighter future for him.

"This incident is currently being investigated by gardaí and anyone who may have witnessed it is being asked to step forward."

Gardaí have asked anyone with information relating to the matter or camera footage of the incident to contact Tullamore Garda Station on 057 932 7600.

Body found in Co. Cork house may have been there for more than two decades