TWO male penguins have adopted an egg that was abandoned and have been caring for it since July at a zoo in Berlin, Germany.

The king penguins, who have been desperate to raise a chick of their own, took up parental duties after the solo female of their group had abandoned hers last month.

The same-sex couple, Skipper and Ping, have been seen trying "to hatch fish and stones" in the past.

According to a zoo spokesman, the two penguins have been "behaving like model parents, taking turns to keep the egg warm" by keeping it on their feet and under their bellies. 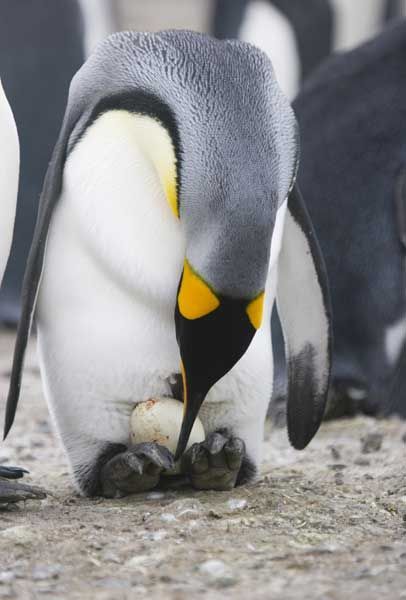 Zookeeper Norbert Zahmel admitted though that they gave the penguins a little push in the right direction.

"We just had to put it [the egg] on the feet of one of the guys and he already knew what to do," said Zahmel.

The lone female in the group is one of six king penguins and has reportedly shown little interest in her eggs recently, and the zoo hasn't had a chick since 2002.

"A successful hatching would be great," added Zahmel.

King penguins are the second largest species of penguins in the world, behind the emperor penguin.

The male couple moved to Berlin Zoo from one in Hamburg back in April, and since then, they've been inseparable.

The pair are now doing their best to protect the egg from potentially jealous rivals, looking to steal it. Penguins have strong parental instincts and have been known to try and steal another couples' egg or even their chick, if they fail to raise one of their own.

Gay penguins have been observed both in captivity and in the wild.

We reported earlier in the year that Dingle Oceanworld Aquarium in Co. Kerry has a gay penguin majority, with eight out of 14 of their gentoo penguins coupled up with a penguin of the same sex.

If Skipper and Ping successfully hatch their egg, it will likely hatch in September, but a spokesman from the zoo has warned that they're still not sure if the egg is even fertilised.

We'll have to wait and see.