Poolbeg Lighthouse in Dublin being hit by high waves from Storm Brendan in January 2020 (Image: RollingNews.ie)

MÉT ÉIREANN has revealed the names that will be used for storms that come our way in the 2021-22 storm season.

The list, compiled in collaboration with Britain's Met Office and KNMI of the Netherlands, often uses names reflective of each nation and its culture.

It is believed that naming storms helps raise awareness of the potential impacts of severe weather.

The practice has been in place since 2014 and once again there is a strong Irish influence on the list, with Barra (Finbarr), Méabh, Pól and Seán making the cut.

Whether they will all get used however is another matter, with names allocated in alphabetical order. Only five storms were named in the last storm season. 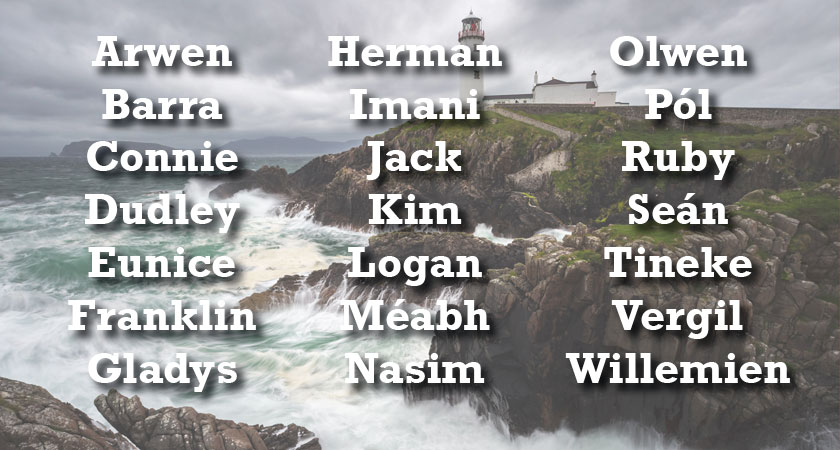 "We are now preparing for the autumn and winter months ahead with a new list of storm names for 2021-22 and for whatever weather may come to our shores.

"Once again Met Éireann will continue to work with our national weather service colleagues in the UK and Netherlands, by continuing to provide a clear and consistent message to the public and encouraging people to take action to prevent harm to themselves or to their properties at times of severe weather."

The letters Q, U, X, Y and Z are not used to fit with international storm-naming conventions.

Other European countries to name storms include France, Spain and Portugal in south-west Europe, and Sweden, Norway and Denmark in northern Europe.

Storms named by other countries keep their name if they reach Irish, British or Dutch shores.

Cillian, Ruadhán and Nelly among Irish storm names for 2022/23