THE grave of forgotten Irish patriot Anna Parnell has been restored 106 years after her death.

The Irish woman died in September 1911 and was buried in Ilfracombe, Devon, where a gravestone befitting her life and legacy is now in place.

Lucy Keaveney, co-founder of the Countess Markievicz School, was instrumental in bringing the unheralded heroine's achievements and her final resting place to light.

"The time has come for Anna to get the recognition she deserves and to have her name written back into history,” she said of the woman who was instrumental in the formation of the Land League in Ireland in the late 1800s.

She was the younger sister of Charles Stewart Parnell, a powerful figure in British politics in the 1880s who fought for Irish Home Rule.

Her radical politics which came at a time when woman did not have the right to vote made her an influential voice.

Her fall into the shadows of Irish history books since her death, however, has prompted some to call for more to be done to ensure her contribution to Ireland is fully recognised.

Anna Parnell- a woman forgotten in our history. Visit her grave each year to maintain it. Hopefully it will be restored later this year. https://t.co/r9otFu9qnP

She was an extraordinary woman. I still get enraged when I think that not only were we taught nothing about her but students aren't today.

Anna Parnell drowned while swimming at the age of 59.

She was laid to rest in Devon, where she had settled and indulged her talent and passion as an artist, with only a handful of witnesses present.

After the visit of Michael Davitt to New York to fundraise for the cause of the Irish Land League, Anna Parnell, along with her sister Fanny, spearheaded a campaign that raised thousands of pounds for the cause in America.

On her return to Ireland she became the effective leader of the Ladies’ Irish National Land League which was founded on January 31, 1881.

This was a significant landmark as it was the first time women in Ireland had formed a mainstream political organisation. 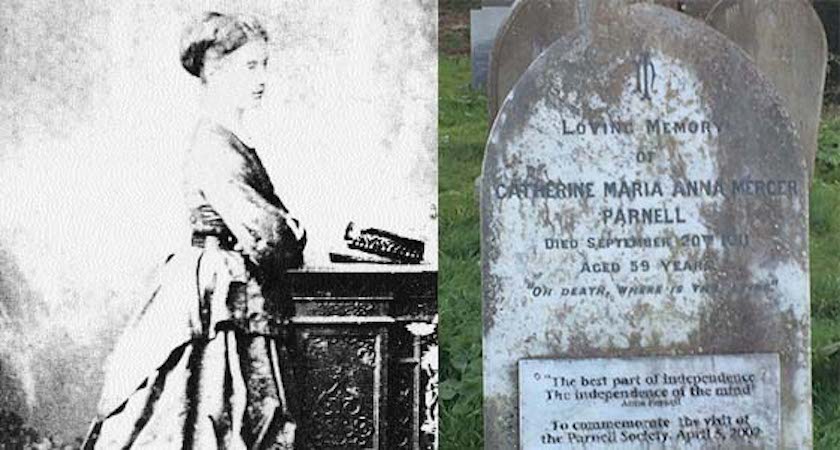 Anna Parnell circa 1878 and her grave before the restoration (Picture: Henry O’Shea/DFA)

The restoration of the grave was funded by the Irish Government, who have described it as 'a step towards the full acknowledgment of the substantial and vital contribution made by women to Irish history'.

"This has come to the fore of public consciousness with projects such as the Women of the Rising as part of the Decade of Centenaries by the Irish Government," a spokesperson said.

Anna Parnell died in a drowning accident 105 yrs ago today. 7 people at her funeral. Buried in Ilfracombe Nth Devon. pic.twitter.com/AmZFtMoGB4

Minister for Culture, Heritage and the Gaeltacht Josepha Madigan added: “The Government is striving to shine a light on the major influence that women, such as Anna Parnell, have had on the formation of modern day Ireland.

"With the restoration of her grave, it is hoped that her rightful place in history alongside her contemporaries in the Irish Land League will be recognised and celebrated by the wider public.”

Support for the restoration project was also given by the Irish Embassy in London, who are actively working to acknowledge the role of Irish women.

“One of the legacies of the Ireland 2016 programme to commemorate the events of 1916 was a greater understanding of and appreciation for the role of women in Ireland’s history," said Ireland’s Ambassador to the UK Adrian O’Neill.

"By highlighting Anna Parnell’s story, we continue that legacy.”