THE DEVASTATED family of a young man who was beaten to death with a crowbar have learnt that his killer had posted hundreds of sick online videos prior to the attack threatening to take someone’s life.

Jimmy Loughlin, 20, was killed in his own home on Connolly Street in Sligo town on February 24, 2018.

His neighbour Richard McLaughlin, whom he had never met, broke down the door of his house at around 1.20pm and unleashed his barbaric and fatal attack.

On July 9, 2019, McLaughlin, with an address at The Laurels, Woodtown Lodge, Sligo, was found not guilty of Jimmy’s murder by reason of insanity and was immediately committed to the Central Mental Hospital in Dublin.

The trial revealed that when McLaughlin attacked Jimmy he was suffering from delusions brought on by paranoid schizophrenia.

The court heard that five years prior to killing Jimmy, McLaughlin had bought a machete from a hardware store to cut another man’s head off, who he believed had done him wrong.

It was also heard that McLaughlin was well known to the local mental health services and that on one previous occasion he had been taken by his mother and the gardai to St Columba’s Hospital in Sligo due to his delusions and violent behaviour.

He agreed to stay there as a voluntary patient but left the ward three days later, went home and assaulted his mother.

It also emerged through the trial that a letter from consultant forensic psychiatrist Dr Paul O’Connell had been written in 2012 expressing concerns that McLaughlin may kill his mother or a stranger due to his delusional beliefs.

An exclusive report by The Irish Sun has since revealed that McLaughlin had posted 1400 videos of himself to YouTube where he spoke about rape and murder prior to killing Jimmy.

In one video he states: “What is stopping me from going out and killing?”

In another he says: “If you don’t apologise, I’ll have your entire family killed…every single one of them, even the f*****g animals.”

The videos only add to the devastation felt by Jimmy’s grieving family – who have been left “shattered” by Jimmy’s death, they told The Irish Post this week.

Parents Michael and Paula Loughlin said: "A number of Jimmy's close friends came across these YouTube videos six weeks before the murder trial.

“Friends and relatives looked at them, but we haven't seen them.  We have been told about some of the videos. There was 2000 hours of videos from August 2017 right up until the barbaric attack on Jimmy.

“To learn that Richard McLaughlin’s behaviour was spiralling out of control and it was clear for anyone to see that this man was clearly a danger, beggars’ belief,” they added. 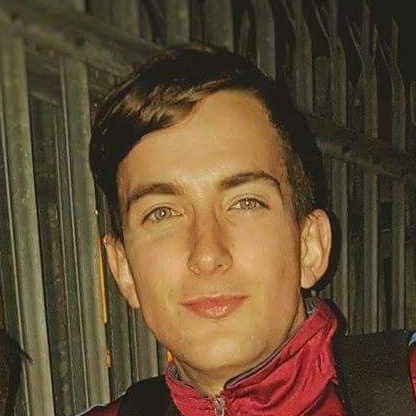 Michael, whose parents hail from Ballintogher in Co. Sligo and Claremorris in Co. Mayo, and Paula were both born and raised in London.

They began raising their own young family in Harrow before deciding to move to Sligo in 2002 – taking eldest daughter Grace, Jimmy and younger daughter Rose with them.

Their youngest daughter Kitty was born in Sligo in 2003.

The couple explain that they made the move for to find “a new way of life”, but admit that now, since Jimmy’s death, they live with the trauma of his loss every day.

“Our family has been completely shattered, especially our three daughters who now have to try and rebuild their young lives and future without their beloved brother,” they said.

“All we can do is be there for them and all support each other through this never-ending nightmare.

“Jimmy was the most loving and caring person you could ever meet, and his presence will be dearly missed by all who knew him.”

They added: “The terrible trauma we have to live with every day will never leave us and it absolutely fills us with terrible anger and sadness that this could have all been avoided if the correct procedures had been followed.”

Family friend and criminologist John O'Keeffe says the support the Loughlins have received since their son's death has been enormous.

He told The Irish Post: "In all the killings I have dealt with over the years, this was one of the most senseless and brutal - however, the family have been able to get through the time since Jimmy's death through the support of not just their own family, but their wider circle of friends and the local community in Sligo.

“Rarely I have seen such a gathering of a community to support one of their number. In this regard, special mention should be made of their close friend, Fr Vincent Connaughton, who has been their rock through these terrible times."

An inquest into Jimmy ‘James’ Louglin’s death is due to take place in Sligo in October.

While the Loughlin family would make no comment, The Irish Post understands that the family are considering taking a civil case against the health authorities.