How regulation changes have finally balanced the game of International Rules

BEFORE last year’s International Rules game in Pattersons Stadium in Perth, in typical professional-sport razzmatazz fashion, the Aussies walked through a huge rip-apart banner emblazoned with the words, ‘Feel the Thunder from the land Down Under’.

In a TV interview minutes earlier, assistant Aussie coach Chris Scott said that the AFL had been “pretty uncomfortable and embarrassed” by recent Australian performances, but their attitude suggested they were about to unleash thunder and hell on the Irish.

In the first-half, they did on the scoreboard. After Ireland’s 2013 routing of Australia, the opening period looked like being a reversal of that result and the unofficial sounding of the death knell of International Rules.

At half-time, Ireland were trailing by 28 points but they had only scored one point in Gaelic football terms. With only seven points on the board and with the third quarter always regarded as Australia’s ‘championship quarter’, Ireland looked set to be steamrolled and embarrassed.

Staring down the barrel of a cannon, Ireland’s response was heroic and brilliant. They reorganised. They altered their system by going more man-for-man. They played the Aussies more at their own game. Their tackling intensity increased.

They outscored Australia 23-11 in that third quarter and the game became a mad late scramble before the clock eventually caught up on Ireland in the fourth quarter.

The contest was even more satisfying given that the game had to meet a list of undeclared requirements in the hope of sustaining the game’s future; competitive; high skill levels; aggressive but disciplined; roared on by a good attendance.

A second Test the following week would have been a treat to look forward to but that option was cut after recent poor meetings heavily diluted interest.

Connecting this game with the public consciousness still continues to be a major difficulty because it struggles for a sustainable identity in both countries.

Holding the Series in November has at least allowed more flexibility and freedom for Irish players. On the other hand, the expansion of the AFL and the knock-on effect on the availability of players in a shorter close season has been a key factor in limiting the Series to just one Test. 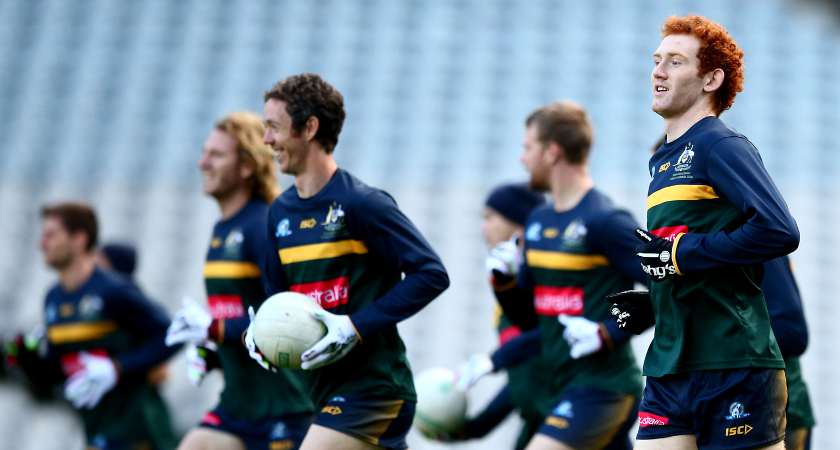 Australia International Rules players Conor Glass and Conor Nash in training [Picture: Inpho]
Reducing that time commitment has been a significant factor in securing the services of Australia’s elite players but having only one Test does limit the game’s capacity to become more a part of the public’s consciousness.

Ongoing rule changes have further diminished its status and threatened its future. Yet given the oscillating nature of the results, and the wild swings in terms of standards – especially amongst the Australians – rule changes are a recurring theme in seeking to strike the right balance.

It was also inevitable after the 2013 fiasco, which Ireland won 173-72, that the Aussies would seek new rule changes to level the playing field. The number of rule changes agreed (four) was less than what they were actually looking for but most of them looked set to favour the Aussies.

The number of consecutive hand-passes allowed increased from four to six. After unlimited hand-passing for years, a cap of four was placed to suit the Irish given how slickly the Aussies were able to move the ball up the field.

Last year’s rule changes though, looked to have finally achieved a good balance. For a start, they forced the Aussies to be better, especially at kicking, which they were.

It also forced Ireland to be tactically smarter, which they were. Although the new kick-out rule – where it had to travel past the ’45 seemed set to tip the balance in Australia’s favour – Ireland routed Australia on kick-outs, winning the overall stat 33-15. Ireland also made more ‘Marks’, (53-22), which was another massive endorsement of Ireland’s character and competitiveness given how much Australia wanted to make it a ‘contested’ game by getting numbers under the ball.

The big question now is whether both teams can hit that level again. After last year’s quality, the last thing needed now is another rout, or poorly contested match. The AFL struggled to interest the top players in a trip to Ireland in the past and a one-game Test hasn’t fully allayed those concerns.

Still, the Australians have picked a solid-looking side again. All players selected in the 22-man squad have previously earned All-Australian selection, while 14 of last year’s triumphant squad are still on board.

However, the expansion of the AFL and the knock-on effect on the availability of players in a shorter close-season has still been a key factor in struggling to secure the services of all of Australia’s top players.

Reducing that time commitment with just one Test was a significant factor in assembling an elite squad last year but some Aussie clubs still don’t want to know about International Rules.

There is always naturally going to be a doubt about the Aussies’ attitude but the 2013 fiasco appeared to be a watershed for the AFL. Last year’s game also showed its huge appeal when both countries adopt the right approach.

The Irish players have almost always embraced the concept but Australia’s attitude still needs to be as consistent. If it is again on Saturday evening, it will be another hugely positive step in safeguarding this game’s future.