Ireland take on Australia in the last game of the Autumn Nations Series.

Andy Farrell’s side come into the game having beaten South Africa and Fiji this month.

The game promises to be another blockbuster

Tickets have been sold out for the game, but not to worry, here is a rundown of TV channel’s team news, what’s been said and everything else associated with the game. 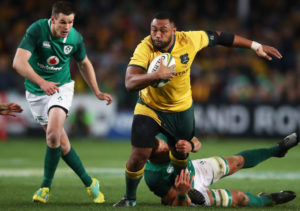 WHERE CAN I WATCH THE MATCH?

The game will be shown live on Virgin Media Two with coverage starting at 7.00pm. It will also be streamed on the Virgin Media Player and on Amazon Prime.

They've played 36 times, with 22 Australia wins, 13 for Ireland and a single draw. Their last meetings came on Ireland's 2018 tour when wins in Melbourne and Sydney saw a 2-1 series win for the visitors.

ARE THERE STILL TICKETS AROUND?

No, they have been sold out.

TEAM NEWS FOR BOTH SIDES

Out half:  1. Johnny Sexton  Scrum Half, 9. Jamison Gibson-Park

ODDS FOR THE GAME

WHAT THE COACHES SAID

Andy Farrell: " They know they can beat anyone in world rugby on any given day and that’s why they’re such a threat and when you add to that Dave Rennie, we know what he brings to a team.

“He’s a wise, wise coach that has been around for a long time and won a lot of things. He’s a very shrewd coach, they are very dangerous and it’s a perfect game for us at the weekend.”

Dave Rennie “"They're an excellent side who are very well coached and drilled. They have a lot of experience and players with 30+ Test caps with 150+ club games."

"They're a very good side but that's exciting to test ourselves against the top-ranked side in the world."

Reminder: Ireland's team to face Australia is out, Johnny Sexton is fit, Jimmy O'Brien starts on the wing.

Tadgh Furlong is expecting a reaction from Australia next weekend