THIS incredible photo showing gorse fires burning across Ireland was taken from space by NASA on Monday.

Fires have been causing havoc in a number of locations in recent weeks, including a massive blaze in Co. Galway that has destroyed a third of Ireland’s largest forest in the Cloosh Valley.

Over the weekend the Irish Air Corps was called in to help battle a gorse fire in the Ox Mountains in Co. Sligo.

In Donegal, fire services have dealt with 54 gorse fires in the last 10 days alone while in Dublin, most recent fires have been concentrated around the area of Howth Head.

NUI Galway (NUIG) is warning that fires in Galway have caused air pollution levels to rise as high as those regularly found in Beijing.

Meanwhile, Irish forestry agency Coillte have warned that thousands of acres of forest, moorland and wildlife across Ireland are at major risk.

The organisation explained that recent dry weather has been a factor but that deliberate fire-starting has also been behind a number of blazes. 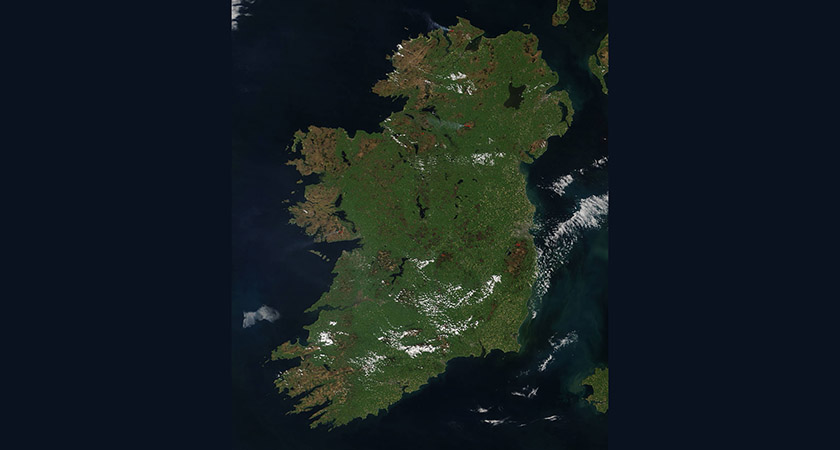 The photo shows fires burning in a number of counties. Picture: NASA

According to NASA, the amount of gorse in Ireland coupled with extremely dry conditions has created the perfect conditions for wildfires to start.

“Most of the 30 or so ongoing fires are around the outside portion of the island,” NASA said.

“The most significant fire is in Cloosh Valley, Galway, which has burned 3,500 hectares (8648 acres) of forest and bog land.

“The 4,000 hectare (9884 acre) forest is one of the largest in Ireland. Firefighters are battling to bring it under control after poor conditions allowed the fire to increase in intensity.”

NASA’s natural-colour satellite image of Ireland was collected by the Moderate Resolution Imaging Spectroradiometer (MODIS) aboard the Terra satellite on Monday, May.

Actively burning areas, detected by MODIS’s thermal bands, have been outlined in red.