Left: a small vigil held in memory of Ashling Murphy on Kite Beach in Dubai (pic: Colleen Mullarkey). Right: candles and flowers left at the vigil held at the London Irish Centre in Camden on Saturday (pic: Connell McHugh)

HUNDREDS OF Irish people in London gathered at a vigil organised by the London Irish Centre on Saturday to remember murdered school teacher Ashling Murphy, one of just many similar events that took place across the globe.

Ms Murphy, a 23-year old teacher was attacked and killed in Tullamore, Co Offaly last Wednesday while out jogging along a popular canal route.

Shortly after 3pm a steady queue began to form to sign a book of condolences outside the centre, with hundreds of people arriving for the 4pm silent vigil start time.

Anna Johnston, one of the organisers of the vigil spoke to the crowd, saying:

"We have come together in solidarity with women of Ireland and women of the world who are angry, distressed and heartbroken.

"Today we remember Aisling, we remember all the women who had their lives stolen through gender-based violence. We shouldn’t be here, and Ashling should be."

Hundreds of people arriving at a vigil in memory of Ashling Murphy organised by the London Irish Centre pic.twitter.com/2zPq3AuFMH

Traditional Irish music was then played as Ashling herself was a talented fiddle player, followed by a rendition of 'Oh Danny Boy' and 'When You Were Sweet Sixteen' by the Fureys, Ashling's favourite song.

Her death has sparked a national conversation on violence against women in Ireland and further afield, with those at the vigil in London drawing comparisons to the killing of Sarah Everard and Sabina Nessa.

Louise Brennan was one woman who attended the vigil, who said that killings of women going about their daily lives is far too frequent.

"My heart is absolutely broken for her family," she said. "There really needs to be greater political will to end violence against women both in Ireland, the UK and internationally.

"Women need to be able to feel that they are safe in their daily lives, and there needs to be greater education and conversations on gender-based violence in schools and in wider society. We don't want to be attending vigils, we want to be able to go for a run or walk without feeling at risk of being attacked."

Similar vigils took place across the UK in Edinburgh, Liverpool and Glasgow, among others, while in Dubai a small gathering of Irish people attended a vigil on Kite Beach.

A running club in Cardiff will also hold a run in memory of Ashling on Wednesday.

Attendees at a vigil in memory of Ashling Murphy in Glasgow on Friday evening (credit: Oisín McCann) 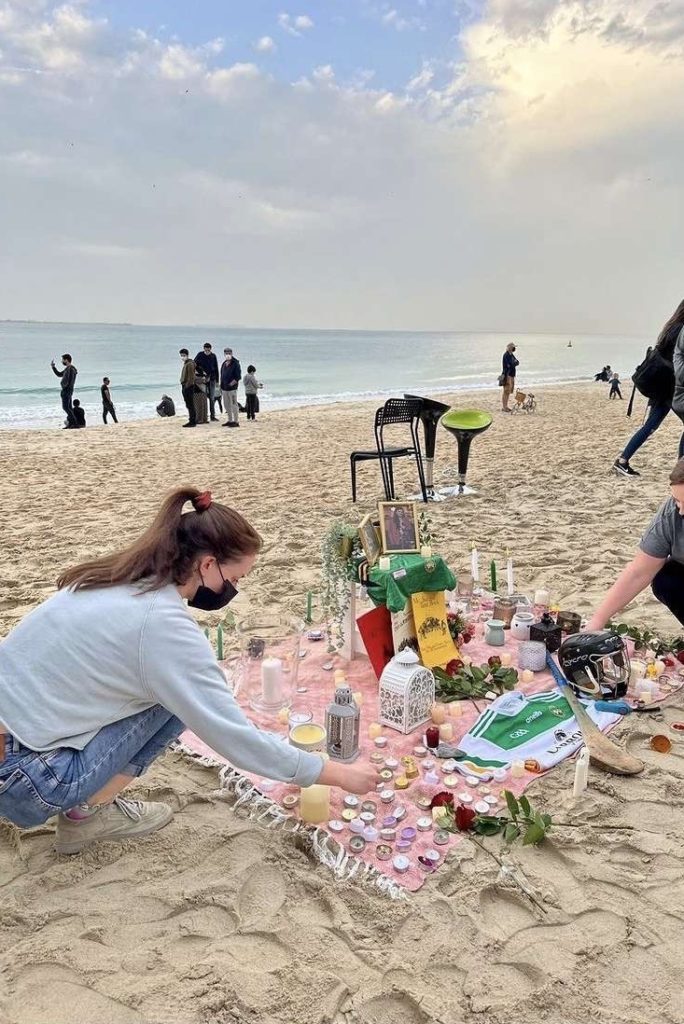 A small vigil in Dubai in memory of Ashling Murphy which took place over the weekend. (PIC: Colleen Mullarkey)

In New York, the Aisling Irish Community Center in Yonkers held a vigil on Friday evening.

Organisers said the Irish community in New York was "was shocked to hear of the tragic death of Ashling Murphy on Wednesday."

"As Irish immigrants, our hearts are always in Ireland and our hands are often tied at times like this when we are too far away to help.

"As a mark of respect for Ashling, her family and friends, we wanted to come together as a community and pay tribute to her life that was so needlessly taken too soon. With a myriad of questions from people in the community asking what one can do in this situation, it’s clear the sentiment of Ireland is here in New York, particularly on McLean Avenue when the outpouring of grief and shock is tangible.

"We hope that the Aisling Center vigil can offer some comfort  to Ashling’s family and friends.

"The Irish in New York is a tight-knit community, and supportive of one another. This is clearly visible at times of difficulty and tragedy. We show our respect and condolences as we share the grief of all that loved Aisling. " 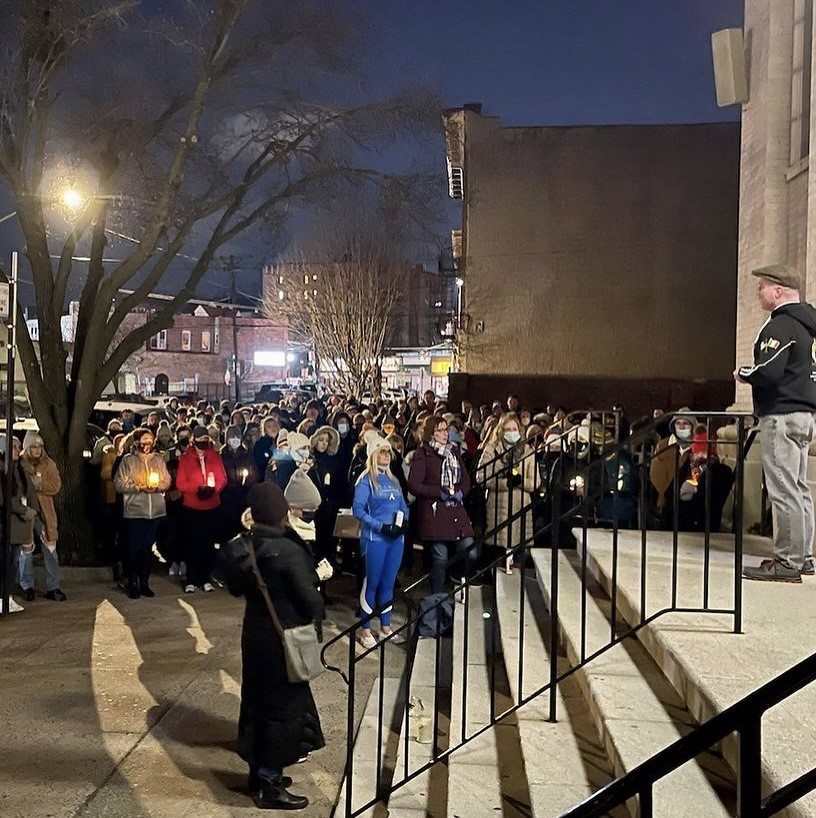 President Michael D Higgins also paid his respects to Ashling on Friday, saying he spoke to her family to convey his profound sympathy and sorrow at the loss of her tragic death on behalf of the people of Ireland.

"The outpouring of grief at the death of Ashling shows how we have all been very touched, and it is so exemplary for young and old, to read of all Ashling’s accomplishments during her short but brilliant and generous life," he said.

"Those who knew, studied with her, or as we have heard, loved her as a young gifted teacher, all have borne witness to a life of generous commitment to her local community and to her creativity. As a young, talented and enthusiastic teacher she had already made such a positive impact on her young students and colleagues at school.  To hear them speak of her is such a testament to the joy of sharing, be it in teaching, music or sport, that she conveyed in a way which must have brought much joy to all. She represented the best of her generation, in a life they will recall as inspirational."

He said it was crucial that the opportunity is taken "to reflect on what needs to be done to eliminate violence against women in all its aspects from our society", and said "that work can neither be postponed nor begin too early."

Minister for Justice Helen McEntee told Newstalk radio on Sunday that a "zero-tolerance" approach will be taken by the government's strategy to tackle domestic, sexual and gender-based violence, which will be published by the beginning of March

"I think what we’ve seen this week really is an outpouring of grief right across the country from women, men, children, all of whom have come together in solidarity with Ashling’s family and her community," she said.

"I myself have often decided, ‘well, I’ll go out for a walk at this time of the day or I’ll go to this area because it could be safer’. That shouldn’t be the case. 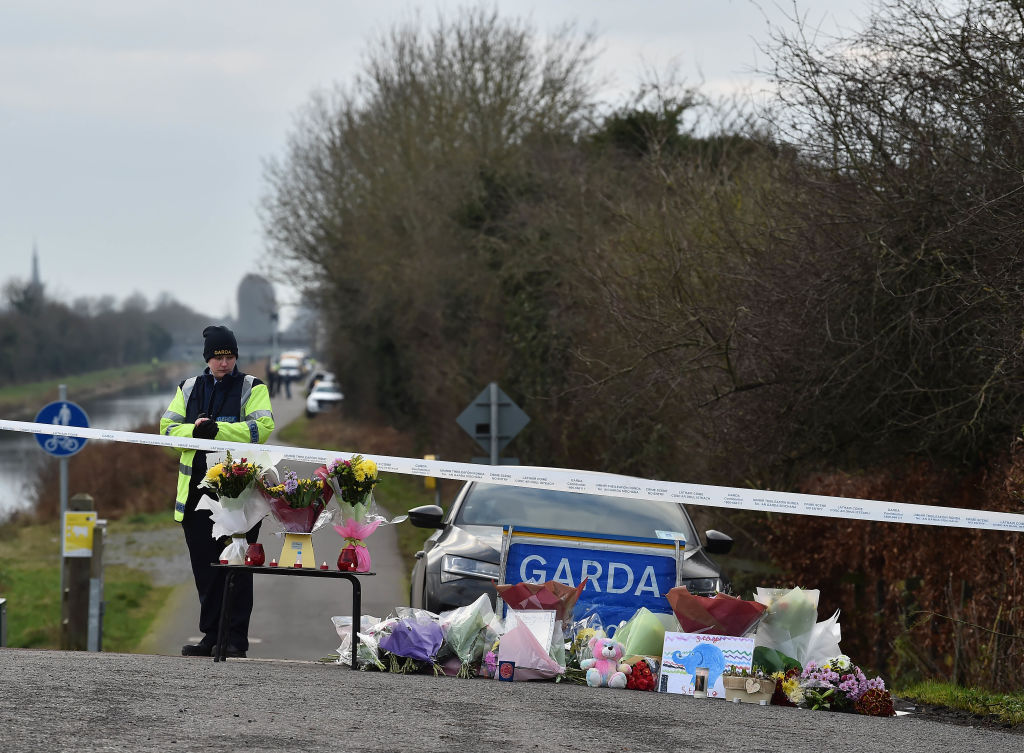 Gardaí continue to investigate the killing of Ashling Murphy and are currently focusing their attention on a man being treated for a variety of wounds in a hospital in Dublin.

Gardaí went to the hospital after being alerted by medical staff that a man was being treated for serious injuries he could not fully explain.

The man has links to the Tullamore area, and two properties in an Offaly village and south Dublin have been searched and examined.

A vehicle owned by the man has been seized, and investigators are trying to establish if the suspect was in the vehicle or either of the two houses at any point after the murder.

A man who was previously arrested in connection with the killing was released last week and eliminated as a suspect.