Irish man decorates house with over 200,000 Christmas lights to raise money for charities

MANY PEOPLE from County Limerick will be aware of a peculiar Christmas tradition-- bringing the family to marvel at a house in Shanagolden which is completely illuminated in over 200,000 festive lights.

'Hayes' Christmas Lights' brings people from all over Limerick and the surrounding counties each year to see one of the most Christmassy houses in Ireland.

It's completely free to attend, but donations, via a bucket at the gate to the house, are always more than welcome.

The unique fundraiser is organised by 30-year old Cormac Hayes, and all proceeds go to Milford Hospice and the Children's Ark Unit at Limerick University Hospital, two charities which mean a lot to the Hayes family, particularly Milford, which helped to care for Cormac's father Timmy before he passed away on December 23rd, 2003.

The family paused the illuminating event for some years, but brought it back in 2017 and now the traditional display gets brighter, better, draws an even bigger crowd and raises even more money for charity with each passing year.

This year saw the Limerick heroes of the 2018 All-Ireland Hurling Championship make an appearance as part of the charitable event-- along with Santa and Mrs Claus, of course-- and the Hayes' held a raffle with all proceeds going towards the designated charities.

The photos don't even do this majestic scene justice; you can see a video of the layout here.

If you're near the area-- or even if you're not, as it's more than worth travelling for-- the display will continue until January 6th, 2020.

To check out more photos of the house and read more about the incredible charitable work the Hayes' do, you can check out Hayes Christmas Lights Facebook page here. 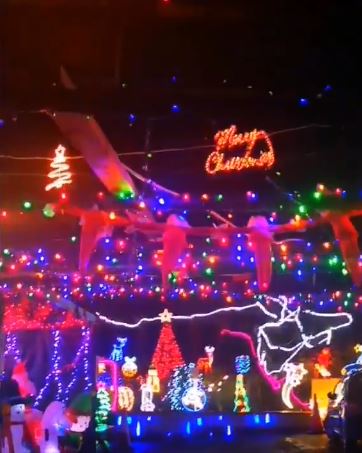 Or to donate directly, you can visit the Hayes' GoGetFunding page for Milford Hospice and Ark Children's Unit at University Hospital Limerick.