AN IRISHMAN with a serious illness has issued a message to all those who attended an 'anti-mask' protest in Dublin over the weekend.

Gareth O'Callaghan lives with Multiple System Atrophy, a rare neurological disorder for which he must receive hours of treatment each week, and is classed as being at at a higher risk should he contract Covid-19.

Mr O'Callaghan, a well-known author and broadcaster who most recently worked with 4FM, retired from radio last year following his diagnosis with MSA.

More than five months after Ireland initially went into lockdown to protect people from the threat of the virus, hundreds gathered in Dublin over the weekend to protest the lockdown, social distancing measures and the mandatory use of masks.

The demonstration was organised by protest group 'Health Freedom Ireland' in conjunction with Yellow Vests Ireland; there was no social distancing adhered to and very little people opted to wear a face mask or covering.

But the consequences arising from the mass gathering could be devastating, as Gareth O'Callaghan wrote in his message to the anti-mask protesters.

Taking to Twitter, Mr O'Callaghan condemned the 'brainwashed, selfish and bitter' protesters who were putting vulnerable people at risk by making no attempt to curb the spread of the virus.

"A message to anti-mask protestors in Dublin yesterday," Mr O'Callaghan wrote, alongside a photograph of himself receiving treatment for Multiple Systems Atrophy. "I have a serious illness.

A message to anti-mask protestors in Dublin yesterday. I have a serious illness. This is how I spend hours of my week receiving treatment. I've been told by doctors to avoid catching Covid-19. When I'm not in clinic I wear a mask to protect myself against idiots like you who (1) pic.twitter.com/PybD2h6EbF

"This is how I spend hours of my week receiving treatment. I've been told by doctors to avoid catching Covid-19.

"When I'm not in clinic I wear a mask to protect myself against idiots like you who seem to think there's some sort of solidarity in stupidity.

"Can you not at least show some care and compassion for vulnerable people who could die if they get this virus?" he continued.

"People like your parents! No, you're too full of your own brainwashed selfishness and bitterness to consider those who are struggling to stay well and avoid becoming ill. 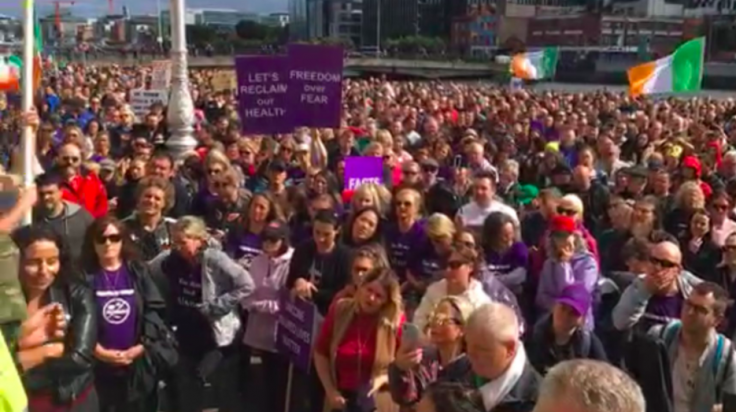 Some of the anti-mask, anti-lockdown protesters in Dublin on Sunday

"Your march yesterday was a slap in the face to all our brave frontliners. Someday you might just end up staring up at some of them while you're being wheeled into ICU.

"Wear a mask. Wash your hands. Grow up!"

Mr O'Callaghan's withering message to the protesters comes after musician Sinéad O'Connor offered a similar frank assessment of the "selfishly unmasked crowds" who used her music as a soundtrack to the day.

She asked them not "to use my music as if to suggest I support you in any way. I do not."

Former member of The Corrs, Jim Corr, an outspoken critic of lockdown, vaccines and the use of masks, told Ms O'Connor he was "surprised you're not yet awake to the Plandemic, but you will be, knowing that great mind of yours."

To which she replied, "Jim, you need to get a life".

Speaking this morning on RTÉ Radio 1, Taoiseach Micheál Martin told Claire Byrne that the protests, and the idea that coronavirus is a conspiracy theory, is "dangerous nonsense".