AN IRISH protester who was tackled to the ground by the Canadian Ambassador after interrupting a 1916 commemoration in Dublin has been handed a two-month suspended jail sentence.

Brian Murphy, of Rathcoole, Co. Dublin, disrupted a commemoration for British soldiers killed in the Easter Rising which was taking place at Grangegorman Military Cemetery back in May.

The 47-year-old was heard to shout “this is an insult to all those who died for Irish freedom” and “free the Cragavon two” before the Canadian Ambassador to Ireland Kevin Vickers wrestled him away.

Mr Vickers was once lauded as a hero in 2014 when he shot and killed a terrorist on Parliament Hill, Ottawa, after the gunman had murdered a member of the armed forces there.

Murphy was found guilty of threatening and abusive behaviour at Blandchardstown District Court.

He had previously pleaded not guilty to the charge. 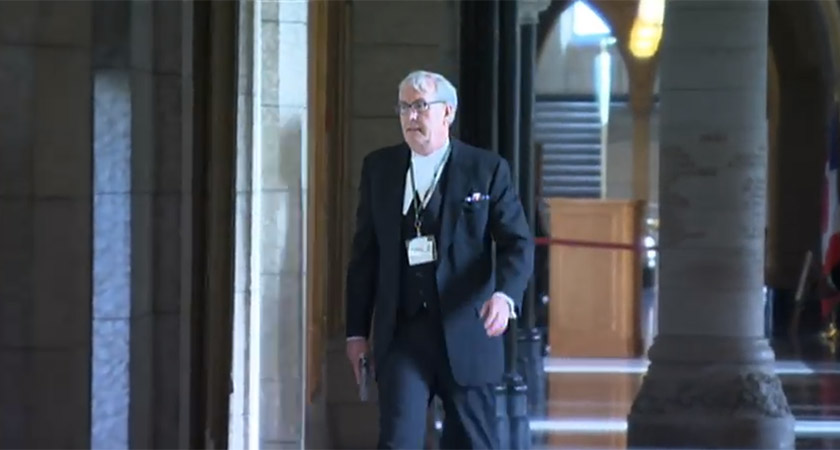 Judge McHugh said that it was clear that the defendant had engaged in “insulting behaviour and it was his intention to provoke a breach of the peace,” on May 26.

It was Judge McHugh’s “very clear view” that Murphy’s actions were “greatly insulting” and “infringed the constitutional rights” of those attending the commemoration.

Garda John Cahill told the judge that the service had only just commenced when Murphy emerged shouting: “This is an insult.”

Garda Cahill described how Mr Murphy stepped into the middle of the service and opened his leather jacket to reveal a t-shirt emblazoned with the slogan: “Justice for the Craigavon two.”

The slogan was referring to John Paul Wootton and Brendan McConville, a Northern Irish pair jailed in 2012 for the murder of Armagh PSNI officer Stephen Carroll three years previously.

Garda Cahill further described seeing Ambassador Vickers tackle Murphy and bring him before a stand, before helping him arrest the man.

It emerged that Mr Murphy had been invited to the invitation-only event, as his great grandfather, who was a soldier, was buried there. 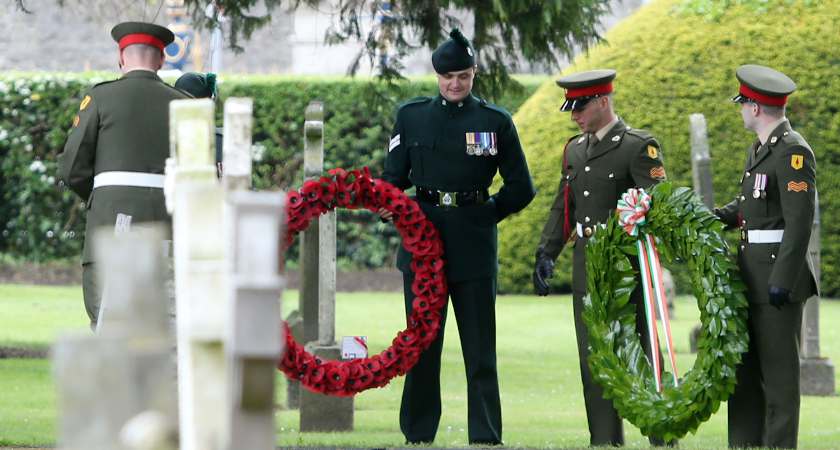 Some of the commemorations on May 26 [Picture: Sam Boal/RollingNews.ie]
30 invited guests were seated on a tiered stand reserved for relatives of the deceased when Murphy disrupted proceedings.

Judge McHugh heard that the service was briefly interrupted and that the band had stopped playing for a short time.

Speaking in his own defence, Mr Murphy dubbed the ceremony “insensitive” as it commemorated those “responsible” for the deaths of those whom “died for Irish freedom”.

Murphy, who has no previous convictions, disputed the allegation that his behaviour could be viewed as insulting.

Defence lawyer Jennifer Jackson labelled his actions as “peaceful protest”, which is allowed under the Constitution.

Ms Jackson said that the defendant was a respectable member of the community and the manager of the John Bosco Youth Centre in Drimnagh.

She added that Murphy had not intended to breach the peace.

Disagreeing, Judge McHugh said that he was satisfied that Murphy had indeed intended to cause a breach of the peace.

Calling Mr Murphy’s behaviour on May 26 a “criminal act”, Judge McHugh handed Murphy a two-month jail sentence, suspending it for a full year.