YouTuber vlogger Elle Darby hasn't had the best of weeks.

YOUTUBER Elle Darby says she received "death threats and cancer wishes" after she was exposed for requesting free accommodation from a Dublin hotel.

The Irishman banned 'all vloggers' from his establishments in the wake of the social media storm that followed.

Then, earlier this week, Stenson sent the YouTuber an invoice for £4.67million for "all the publicity" she received after the fiasco went viral.

Now, in a video titled 'My side of the story/moving on', Darby has spoken out about what she describes as an "unfair situation".

The 22-year-old said she'd been "torn up" about whether to make the video, but that there were a number of claims she wanted to refute.

"The first idea is that I exposed myself," she began. "This is not true in any way, shape or form.

"If you believe this you were probably late on the band wagon with this whole situation.

"At about 10 o'clock on Tuesday morning a post was uploaded to Facebook, which included a screenshot of my email.

"The parts with my name on had not been blacked out...it had a black highlighter over them but – if you turned up the brightness on your screen – you could see my name.

Ms Darby said she has been subjected to a torrent of abuse since she posted another video about the situation, titled 'I was exposed (SO embarrassing)', last week.

The self-proclaimed 'social influencer' was accused of ageism after inferring in the vlog that older people such as Mr Stenson do not understand social media.

"[That video] was something to clear it up after all of the troll messages I'd been getting," Darby continued.

"I don't think the situation should ever have escalated to what it escalated into – me getting death threats and cancer wishes. 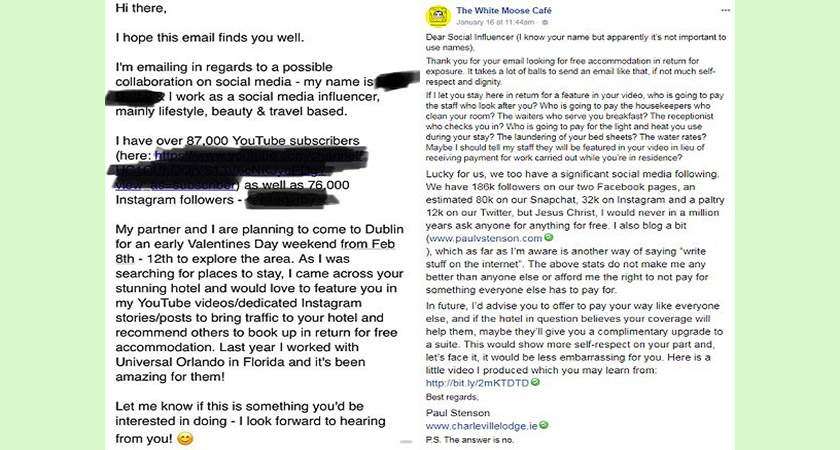 Darby then broke down in tears as she revealed some of the worst abuse and threats she has received in the past week.

"To be completely honest, it's just been really overwhelming – people telling me that I should die, that they hope my children get cancer.

"I've been called almost every name under the sun – words that I didn't even know existed".

Darby also revealed that she had been to her GP to discuss the anxiety provoked by the recent fiasco.

"From what I can think – assume, I don't even know – it was supposed to be a bit of a joke from the other person involved in the situation."

She added: "This has not been fair."

Irish hotelier who snubbed British blogger’s request for free stay sends her £4.5m bill for ‘all the publicity’