JAMES FORREST, Scott Brown and Olivier Ntcham are all bidding to return to the starting line up as Celtic look to complete the job against FC Copenhagen in the Europa League tomorrow (8pm).

Odsonne Edouard’s goal in the first leg helped Neil Lennon’s side to a credible draw 1-1 in Denmark last time out.  It could – and should – have been even more, with the hosts dominating the first half. But Celtic were indebted to Fraser Forster’s late penalty heroics.

His save from Jens Stage ensured parity and means Celtic are in the boxseat to progress to the last 16 of the competition. Celtic captain Brown went off injured with a calf strain in the first leg and missed Sunday’s 3-1 win at home to Kilmarnock in the league.

Forrest and Mtcham were also absent on Sunday and of the three, Lennon is most optimistic about Forrest’s chances. 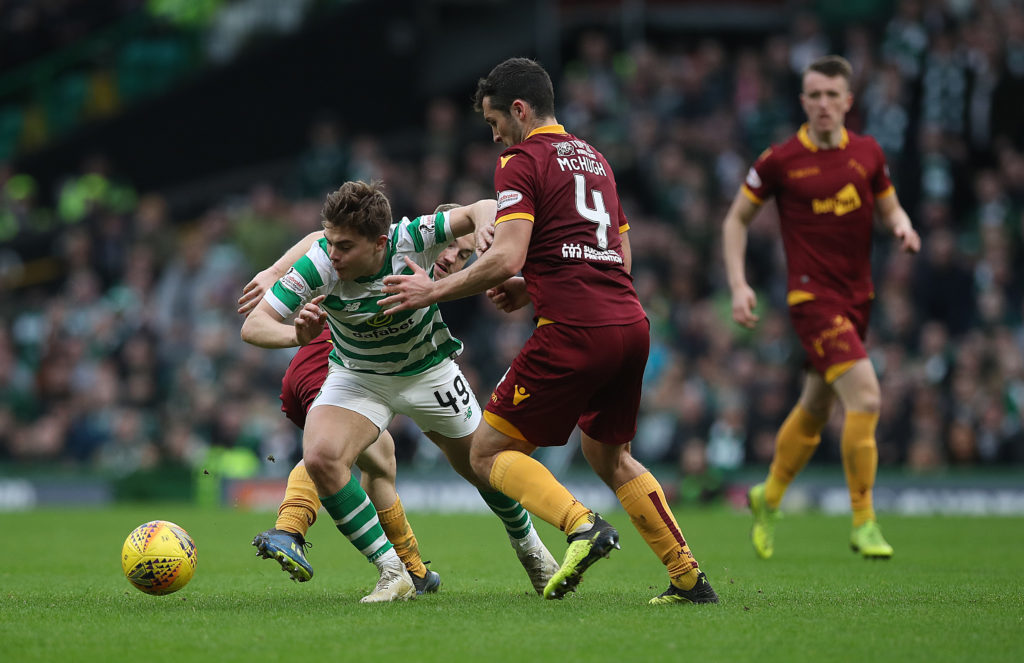 James Forrest of Celtic controls the ball during the Ladbrokes Premiership match between Celtic and Motherwell at Celtic Park on February 24, 2019 in Glasgow, United Kingdom. (Photo by Ian MacNicol/Getty Images)

“Jamesy should be fine but we will have to wait and see with the other two,” he told reporters this week. “Thursday is huge. It’s Celtic Park under the lights. It’s something for the players to look forward to against a very good side.

"Going in 1-0 at half-time over there I felt we could've been two or three up. I thought we had good control of the first half. We gave away a poor goal from our point of view and it gave Copenhagen a huge lift psychologically.

"I felt on the counter attack we had great chances in the second half as well, so I'm disappointed we haven't come away with more goals."

Icing on the cake

Celtic go into this contest buoyed by Sunday’s win against Kilmarnock which stretches their lead to 12 points at the top of the Scottish Premiership.

Such a scenario may have seemed unlikely when the Hoops slipped to defeat against Rangers at Parkhead as recently as December.  "It's great for us to extend it the lead," Lennon said.

"It's the icing on the cake, if you want to call it that, but it was just important to keep the momentum. I thought we were outstanding (against Kilmarnock) considering we went a goal down.

"I'm not happy with their goal.  I thought Eamonn was Brophy offside once he's got the other side of Jozo [Simunovic]. But our reaction to that was fantastic and it was just a magnificent performance.”