Crock of Gold: A Few Rounds with Shane MacGowan - Julien Temple on exploring The Pogues icon

JULIEN TEMPLE has made films about some of the world’s most brilliantly provocative musicians – but few quite compare with Shane MacGowan.

His new film Crock of Gold: A Few Rounds with Shane MacGowan is a brilliant two-hour odyssey chronicling the highs and lows of an unparalleled Irish musical talent and individual who transcended music as a poet, storyteller and historian.

Blending occasional interviews with animated sequences and tales from MacGowan himself, it’s a fascinatingly intimate portrait of a man whose impact and importance to both Irish culture and music as a whole often goes understated.

Making a film about the former Pogues frontman was no easy feat though as Temple explained to the Irish Post.

What inspired you to make this film?

I’ve known Shane since the height of the punk movement. I remember filming him at gigs among all those pogoing maniacs. There would so much energy coming off the stage. It was like radiation fizzing through his being and he was always so into it you couldn’t stop filming him. The first interview I ever did with him is in the film where he has got the peroxide blonde hair that every punk had. I would never have guessed what a majestic songwriter he would turn into.

He asked me to do the film. As you know I’ve made a lot of films about music and different aspects of social culture. I had never really explored the Irish scene in my films about London so I was really fascinated by that idea. But I was also weighing up whether I wanted to go through the personal pain of doing it. Everyone knows Shane is difficult and he wouldn’t be Shane MacGowan if he wasn’t, so you know what you are going to get. It was whether I was mentally fit enough to go through it. When Johnny Depp got involved as producer, I thought that would help it from capsizing. I am glad I did, he’s an amazing, fascinating, complicated, contradictory curmudgeon and a great subject to film.

What was the biggest challenge you faced in making a film about Shane?

Rolling with the abuse really. He’s a difficult guy. That’s what’s wonderful about him. But you had to be able not to walk away. To finish it.

You’ve worked with made films about a lot of incredible talents from the world of music – what makes Shane so unique?

What makes every talent unique is the contradictions within them that collide and create this spark that then combines into this fire of creativity. This film is about the nature of creativity and where it comes from and Shane’s contradictions are epic really. The guy who grew up in London but dreamt of being in Ireland. The London punk who went to Westminster public school. The generous Shane versus the aggressive Shane. The many sides of this man that combine to create the insights and fearlessness that also led him into darkness. All these things add up to an extraordinary figure who was able to harness the creativity of all those contradictions into writing some of the greatest Irish songs of all time.

Do you think Shane and The Pogues gave a voice to the Irish diaspora that wasn’t there before?

Very much so. I think those kids in the eighties who embraced the Pogues found a rallying call in their music and in Shane’s words and attitude. It was such a big and visible community in those days. If you grew up in north London like I did, you were aware of the Camden town Irish and the Cricklewood Irish and all the music that was coming out of the pubs. It was a very visible culture which is now more integrated.

You were aware of the jokes and the racism about being Irish. The fact that some wouldn’t rent rooms to Irish people in the same way they wouldn’t rent rooms to black people. All those things that the Irish community in London and in places like Manchester and Birmingham had to put up with suddenly exploded into a righteous anger and self-respect with Shane MacGowan and The Pogues. That really affected not just the young people but also the older Irish in England who really understood the songs.

There was resistance from some of the old guard in Ireland at first but I think they really understood in the end that the new energy had to come from outside of Ireland in places like London. They were going to reinvigorate and reanimate Irish music and culture beyond music. I think Shane is, as Joe Strummer said, a poet and an important lyricist beyond the music itself. 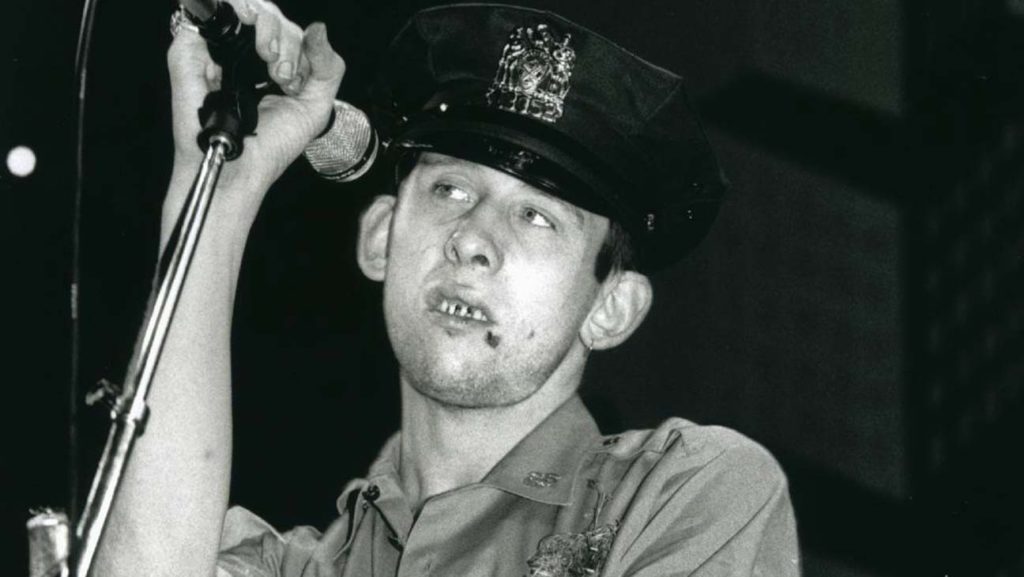 Shane’s songs and his lyrics showcase this incredible appreciation and knowledge of Ireland and Irish history, where does that stem?

His father was this very important influence. Inspiring him to read all the great Irish literature. His extended family in Tipperary, his mother’s family, were so connected with the Irish war of Independence. That area of Tipperary was where that all began. So, they would tell him the stories of what it was like, which as a kid was something extraordinarily fascinating to think had been happening in that area not that long before he was born.

Also, he had a public school education. I know he rebelled against it but it still feeds in to who he is. He was absorbing so many contradictory perspectives.  If he had just been in Ireland, growing up and coming of age, he would have been bored of the place. He would have wanted to get out of Tipperary. But the fact he was able to mythologize it while he was going through what he was going through in London gave him a deeper connection in a weird way.

At this time of year there is always a lot of focus on Fairytale of New York does any part of you feel like the attention it gets detracts from their wider body of work?

Fairytale of New York does detract from it but there is also often an attempt characterise Shane as this almost circus animal, just a drunk and an abuser of various substances, and the whole idea of “oh he should have been dead two decades ago”.

There is an attempt to diffuse the real edge of Shane by wrapping him up in that Christmas song and that sort of chat show version of the guy everyone laughs at because he’s a drunk. Not knowing that his wit is as sharp as any TV host.

Fairytale of New York diffuses the power and the danger and the provocation and the wisdom and the suffering and all the things found in great songs like Rainy Night In Soho, which is a fantastic song and Pair of Brown Eyes and Old Main Drag and The Body of an American - the list is endless.

And these are probably even greater songs than Fairytale of New York which is a great song but it has become this Christmas myth. It’s not about understanding who Shane MacGowan is anymore. They ban it or they don’t ban it, whatever they do. It takes the focus away from an incredible body of work.

Is there a sense of frustration over this endless debate about the lyrics of the song? It’s almost become an annual news story

Yeah, but I think it helps sell records. It certainly coincided well with the release of this film. Look, it’s going to run and run because there is no easy solution to it. You don’t want to censor people’s work but you don’t want to insult people’s sexuality. You’re stuck in the middle but it’s not the only issue like that. We have many current conundrums like this to deal with. I don’t have any kind of wonderful answer on that front. I think it’s a great song, but people react differently to it. It’s a debate that runs and runs.

Do you have a favourite memory from your time working on this film with Shane?

I remember moments that made me cry! But you have to laugh to get through it so there were lots of laughs too. We had a great time waiting for three days in Tipperary for Shane, only for him not to show up in the end. We had many laughs with all the people around there that knew him. They told us wonderful stories. It’s not hard to have a laugh in a pub in Tipperary.

Where does Shane stand in the pantheon of great Irish musicians – is he up there with the very best?

Definitely. I think people know that. People like Bono know that. He’s certainly well respected and rightly so because of his body of amazing work both musically and lyrically. He might have this reputation for being aggressive or nasty at times, but there is a sense that he doesn’t give a s***. That’s Shane and you have to celebrate that. I think people in Ireland have a special place in their hearts for him.

What do you hope people take away from this film? Do you want to change perceptions of Shane?

I want people to see beyond Fairytale of New York and the joke version of Shane. Unfortunately, many people only know those two aspects of who he is. I want to situate him in the history of England and Ireland that he taught me about. I would like young people to ponder on that side of history that they might not learn about at school and get into the Pogues music because it is something they might not know about that is immensely enjoyable.

Crock of Gold: A Few Rounds with Shane MacGowan is available to watch now