A POPULAR radio show for the Irish community in Manchester has aired for the final time after 14 years on air.

Joe Casserley’s Full Irish radio show, broadcast since 2003 on the Manchester community radio station ALL FM, aired for the final time on Sunday, October 16 after Mr Casserley decided to resign.

Mr Casserley had received a complaint about his previous show that went out on Sunday, October 9, for comments he made about another of ALL FM’s radio shows.

As part of his final show on October 16, Mr Casserley read out the letter of complaint to his listeners before making the abrupt decision to leave the station.

In a statement, ALL FM said: “We are saddened to hear that the Full Irish radio show will no longer be broadcasting on Sunday on ALL FM.

"We had no knowledge in advance and were as surprised as everyone by the news.

“Earlier in the week we received a letter about the previous week’s Full Irish show remarking that negative comments had been made about an unnamed show.

“When we receive a complaint, we forward the letter to the presenter.

"This letter was forwarded to Joe for his comments. As far as we were concerned this minor matter was closed. 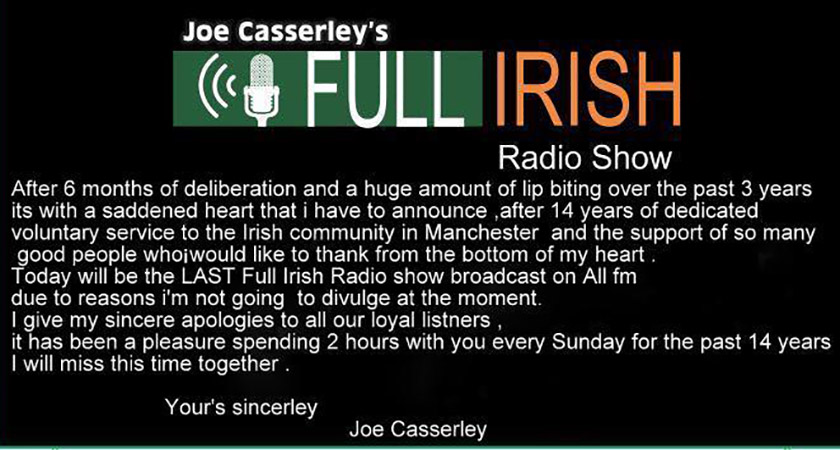 Joe Casserley's statement (Picture: Full Irish)
“We’re aware of what a talented broadcaster Joe and his team are and know how popular the show is. So to lose the Full Irish

show is a disappointment.

"We wish to thank them for all they’ve contributed to ALL FM, the Irish community and the City of Manchester.”

Speaking to The Irish Post, ALL FM’s station manager, Ed Connole, reiterated that Joe Casserley’s sudden departure from the station had come as a surprise.

“There was no forewarning that this would happen, we had no chats with Joe over the future of the Full Irish and as far as we were concerned the show was continuing as normal,” Mr Connole said.

“The letter of complaint in question was not a particularly strong one but we had to pass it onto Joe nevertheless as it is procedure at ALL FM to do so.

“There was absolutely no pressure put on the Full Irish show to quit or cease broadcasting.”

Mr Casserley was contacted for comment but is yet to respond.

The Full Irish show aired every Sunday between 3pm and 5pm on Sunday afternoons, and was popular among the Irish community in and around Manchester since it first aired in 2003.