THERE was plenty of news to keep these pages full over the course of 2019 - here's our selection of some of the most pertinent stories...

Brexit dominated politics in Britain, Ireland and Northern Ireland throughout the year. In England a sour national mood pervaded the country; in Scotland — which voted to remain in the EU — the calls for independence grew ever louder with the SNP scoring heavily in the General Election.

In Northern Ireland, where more than 55 percent voted to remain, Brexit was superimposed on the traditional political divide of nationalists versus unionists.

Earlier in the year the DUP, staunch Brexiteers and even stauncher unionists, struck a “confidence and supply” deal with the Conservative party in the House of Commons. This fell short of an actual coalition — and many times fell short of any deal at all when the party voted against the Theresa May government. But Boris Johnson’s thumping victory in December’s general election, and their own loss of two seats, meant that by the end of the year they had lost all leverage at Westminster and were looking at a changed political landscape in the North.

The “Irish backstop” became a major factor in negotiations. This was designed to prevent border controls between Northern Ireland and the Republic of Ireland, and it proved to be a major sticking point in negotiations

Many of those who voted for Brexit — even up to ministerial level in the British government — were only dimly aware that the border between the North and the Republic was a potential problem. Secretary of State for Northern Ireland Karen Bradley admitted that she hadn’t read the Good Friday Agreement — it was suggested that it should be on her ‘must-read list’ ASAP.

Had she read the agreement in advance, she would have known that a ‘soft’ border was guaranteed under the terms of the Good Friday Agreement, and the EU — a signatory to that treaty — were adamant that this provision could not be swept under the carpet.

One of the main hopes of Brexiteers — that the EU itself would fragment when Brexit negotiations began — proved hopelessly inaccurate. In fact the countries of the EU with he exception of Britain, never looked more united. 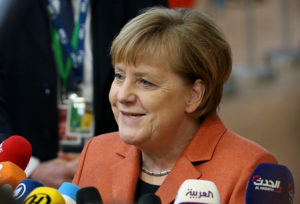 In comparison to politicians in England, Taoiseach Varadkar began to emerge as a very substantial leader, and Tánaiste Simon Coveney, was viewed as a sure-footed negotiator. Taoiseach Varadkar has an approval rating of over 50 percent in the Republic (quite substantial), a reading probably buoyed up because he managed to look so statesmanlike in comparison to the UK’s bumbling politicians.

That bumbling eventually caught up with Theresa May in July. She had imposed a patently unworkable timetable of two years on Brexit and her laying down of red lines undermined negotiations with Brussels. Her mismanagement of the entire process eventually brought her premiership to a close in July.

“We are now entering a very dangerous period for Ireland,” said Taoiseach Leo Varadkar, speaking about the possibility of a ‘no-deal Brexit’ successor to Prime Minister Theresa May.

The Taoiseach warned of the prospect of "a police presence, or an army presence" at the border in a worst-case Brexit.

However, with Boris Johnson winning the British general election by a substantial margin, his withdrawal deal — which specifically rules out any hard border on the island of Ireland — is probably the best result that EU leaders, including Leo Varadkar, could hope for.

Brexit and the Irish in Britain

For the Irish in Britain, no matter what form Brexit takes there will be no change in landed status in either direction Because of the Common Travel Area (Ireland, Northern Ireland and Britain) in all circumstances, the rights of Irish citizens in Britain, — and of British citizens in Ireland, — to live, work, travel freely, access education (at all levels), public health and social services will continue to apply.

The Common Travel Area was in place before Ireland or the UK ever joined the EU, it remains unchanged and will continue to do so.

It emerged that Brexit might not all be bad news for Ireland. according to IDA Ireland several thousand jobs were created by international firms as a result of Brexit. When/ if Brexit happens, Ireland will be only one of two countries left in the EU where one of the official languages is English (Malta is the other). This could be a boon for Ireland as English is the international language of everything from commerce to technology, and from science to entertainment.

Financial institutions have also benefited, as exemplified by arch-Tory and devout Brexiteer Jacob Rees-Mogg. His fund management company set up an office in Dublin. And although the top-hatted, theatrically retro MP appeared to know little about the border, he undoubtedly was familiar enough with Irish geography to spot that Dublin lies well within EU territory. 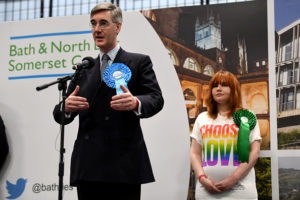 In January abortion services became available in Ireland for the first time under the provisions of the Health (Regulation of Termination of Pregnancy) Act 2018. This brought the country in line with most European countries, although not with neighbouring Northern Ireland — where the DUP remained opposed to abortion. But by October abortion had been decriminalized in the North, meaning that women can terminate a pregnancy without fear of being prosecuted.

The law change came after MPs at Westminster voted for a law change in July, on the basis that a Northern Ireland Executive did not return by Monday 21 October.

Figures from Eurostat showed that the Irish police-to-population ratio was less than the European average with 278 Garda officers per 100,000 of the population.

In February a 30-year-old Italian man was jailed for three-and-a-half years for the assault of Liverpool fan Sean Cox outside Anfield in April 2018. Meath-born Sean continues his rehabilitation.

In November two teenage boys received respective sentences of life and 15 years for the murder of 14-year-old Anastasia ‘Ana’ Kriégel, a Russian-Irish girl, last year. The case aroused widespread horror and shock when it emerged that she’d been subject to a violent attack, murdered and sexually assaulted. The attack happened in an abandoned house in Lucan near Dublin. Two boys, known only as Boy A and Boy B who were 13 years old at the time of the murder. The two are the youngest in the history of Ireland to be charged with murder.

A former female member of the Irish Defence Forces, Lisa Smith, was detained in Syria over alleged membership of Islamic State, also known as ISIS.

In December she was allowed to return to Ireland, and was arrested on suspicion of terrorist offences after arriving at Dublin Airport on a flight from Turkey.

Ireland remained a very litigious country, and this culture of claiming for damages cost one TD very deeply both in the purse and in her career prospects

Maria Bailey TD (Fine Gael) mounted a compensation claim for €60,000 against the Dean Hotel, Dublin. Ms Bailey had fallen from an “unsupervised” swing in its reception area. She claimed for injuries to her head, back and hip. However it emerged that Ms Bailey had reportedly been holding a beer in one hand and a wine bottle in the other.

It also emerged that Ms Bailey had run a 10km race in Dun Laoghaire just three weeks before the incident.

Taoiseach Leo Varadkar initially demoted Deputy Bailey from the Oireachtas housing committee chair position,and in November 2019, the Fine Gael National Executive voted to deselect her as a candidate in the next Irish general election. 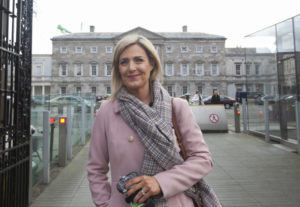 The evidence against Bailey, originally from Manchester, had been tested vigorously in Ireland in the years following the murder. The Director of Public Prosecutions ruled that there was insufficient evidence to proceed. The evidence was re-examined following applications from the French government for his extradition; the conclusion was the same — that no viable case existed against the Englishman.

No forensic evidence has ever linked Bailey to the murder, no direct eyewitnesses emerged and the testament of the only witness placing him near the scene of the crime has been branded unreliable.

Nonetheless, the guilty verdict by the French court means that Bailey’s movements are now heavily restricted, at least until extradition proceedings are resolved.

Travel to any country with an extradition treaty with France would now carry with it a risk of arrest.

In addition, Bailey is now expecting to face a civil action in Ireland from the film producer’s family. He told RTÉ he is likely to be sued for €875,000 in damages.

In 2018, Arlene Foster stated that the ongoing political deadlock was caused by Sinn Féin's insistence on an Irish Language Act that would grant legal status to Irish in Northern Ireland, which Foster's party refuses to allow. Thus the suspension of the Executive continued into 2019.

At the general election in December the electorate delivered a seismic blow to the DUP. They lost two of their seats, Deputy Leader Nigel Dodds failed to be re-elected, and for the first time in Northern Ireland’s history there is now the extraordinary situation of their being more nationalist MPs than unionists. There is in addition one MP from the liberal centrist Alliance Party MP, Stephen Farry. Calls for a border poll have accordingly grown. 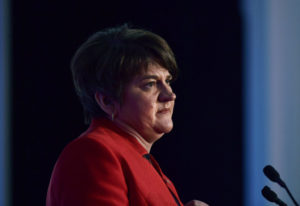 On 18 April 2019, Lyra McKee was shot during rioting in the Creggan area of Derry. Violence broke out after police raids on the homes of dissident republicans. Youths threw petrol bombs and burnt two vehicles. Police said that a gunman then fired up to twelve shots towards police officers. McKee, who was standing near an armoured police Land Rover, was fatally wounded and died a short time later.

After McKee’s death, rumours circulated in Derry that dissident republicans orchestrated the riot that partly to impress an MTV film crew fronted by the broadcaster Reggie Yates, the former Top of the Pops presenter

Yates and his crew were filming a documentary in the Creggan area of Derry at the time.

The PSNI laid the blame at the door of blamed dissident republicans for her death.

The inquest into the deaths of ten people in the nationalist area of Ballymurphy, Belfast in August 1971 continued. The Ballymurphy Massacre, as it has become known, took place in 1971 in an area of west Belfast. Ten people, including a priest, were killed during three days of shooting involving British troops.

The trial of ‘Soldier F’ also began. The former paratrooper is accused of two murders and four attempted murders on Bloody Sunday in Derry in 1972.

The prosecution of Soldier F was announced in March. Families of victims had pushed for additional soldiers involved in the deaths to be prosecuted. However, the PPS said that 16 other former soldiers, and two suspected former members of the Official IRA, would not face charges. Prosecutors decided, after a six-year police investigation, that the admissible evidence was insufficient

The case was adjourned in September.

On March 17 three teenagers were crushed to death at a St Patrick's Day disco party in a hotel in Cookstown, Co. Tyrone.

In April an inquest found that a botched IRA warning call contributed to the deaths of 21 people killed in the 1974 Birmingham pub bombings.

The first three names were also published by Chris Mullin, a long-term campaigner for the release of the Birmingham Six wrongly convicted of the bombings.

Michael Murray died in 1999, James Francis Gavin in 2002. Michael Hayes lives in the Republic. According to ‘Witness O’ he is immune from prosecution.

The Birmingham inquests previously heard the bombings were "an IRA operation that went badly wrong".