A MAN is searching for two Irish friends who incredibly helped airmail him from Melbourne to London when he ran out of money in 1965.

Brian Robson, now 76, travelled out to Australia as a teenager on an assisted two-year immigration programme.

He got a job working for Victorian Railways, but homesickness took over and Brian decided he needed to fly home.

The only trouble was, he couldn't afford to. Not only would he have had to buy a plane ticket, but he would have also had to reimburse the Australian Government €900 for quitting the immigration programme early.

But he hatched a crazy plan, involving a couple of Irish friends and colleagues of his, Paul and John,

It took a week to convince the pair to go through with it, but Brian eventually convinced the Irish lads to help airmail him home in wooden crate.

"John was with me all the way, but Paul did not want to do it at all," Brian admitted.

Paul, who had access to a typewriter, filed all the necessary paperwork to send the crate to the other side of the world as freight, while John helped nail him into the crate - which was about the size of small fridge.

An air-hole was punched in the crate so Brian could breathe, and after grabbing a couple of pillows, a torch, his suitcase, and two bottles - one for water, one for urine - he set off on his perilously dangerous voyage across the globe. 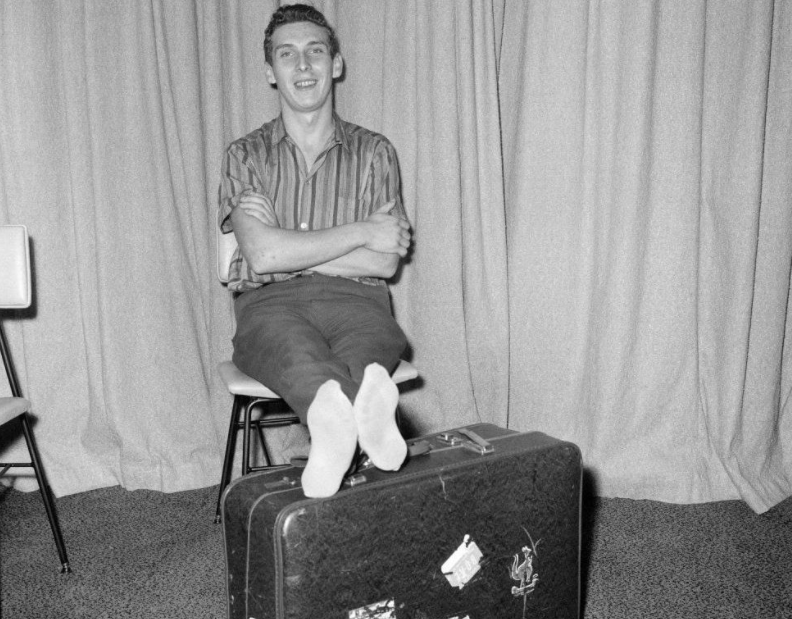 Brian Robson after arriving back in the UK (Pic: Getty)

The journey was an incredibly painful one. Crammed into the box for five days, Brian was unable to stretch his legs or even turn around, and at one point, the crate was tipped upside-down and left there for 22 hours.

Brian suffered blackouts as workers ignored the crate's 'this side up' label.

Worse yet, the plane was supposed to fly directly to London, but instead was diverted on a much slower route through Los Angeles.

Brian was spotted when an American airport worker peeped through the crate's air-hole only to see a pair of eyes staring back at him.

"I was in the crate for five days and ended up in a freight shed. I thought I was in London," he said.

"I could move my hand to get to my torch but my fingers were very stiff so I dropped the torch. I heard voices saying: 'What's going on there?'

"That's when I realised two men were not speaking with English accents, they had American accents.

Brian recalled the moment he was spotted.

Once out, Brian had frozen stiff and was taken to hospital where he eventually recovered the use of his limbs.

He was later sent home to London, but Brian never saw or heard of Irish friends again, having never learned their surnames.

"I did try [and find them] a couple of times, I think, and of course we didn't have the internet in those days, so from that day to this I've never spoken to them.

"They were the last people I spoke to in Australia before the crate was sealed shut."

Brian went on to enjoy his life, start a family and build successful career and now, aged 76, he has written a book about his big adventure - The Crate Escape - to be published at the end of the month.

Looking back, Brian says he cannot believe his hare-brained idea, or that actually got him home.

"It was stupidity. If my kids tried it, I would kill them," he said. "But it was a different time."

Now all he wants is to meet up with his Irish friends again.

"If I met them again, I'd just like to say that I'm sorry I got them into this and that I missed them when I came back," he said.