A COLOSSAL moving statue built by an Irish company is being billed as one of the most exciting visitor attraction concepts of the 21st century.

The Giant, which was conceived by Dublin-based The Giant Company, led by entrepreneur Paddy Dunning, is the world’s tallest moving statue, standing over 10 stories high.

It comes complete with exhibition space, a roof garden, dining facilities and a viewing tower - allowing visitors to literally stand on the shoulders of a giant and look out over the city below.

The Giant’s arms and head can move positions and its patented skin, a matrix of millions of programmable LED pixels, gives it the ability to instantly take the form of any man or woman – from historical figures to celebrity stars, or simple selfies of its visitors. 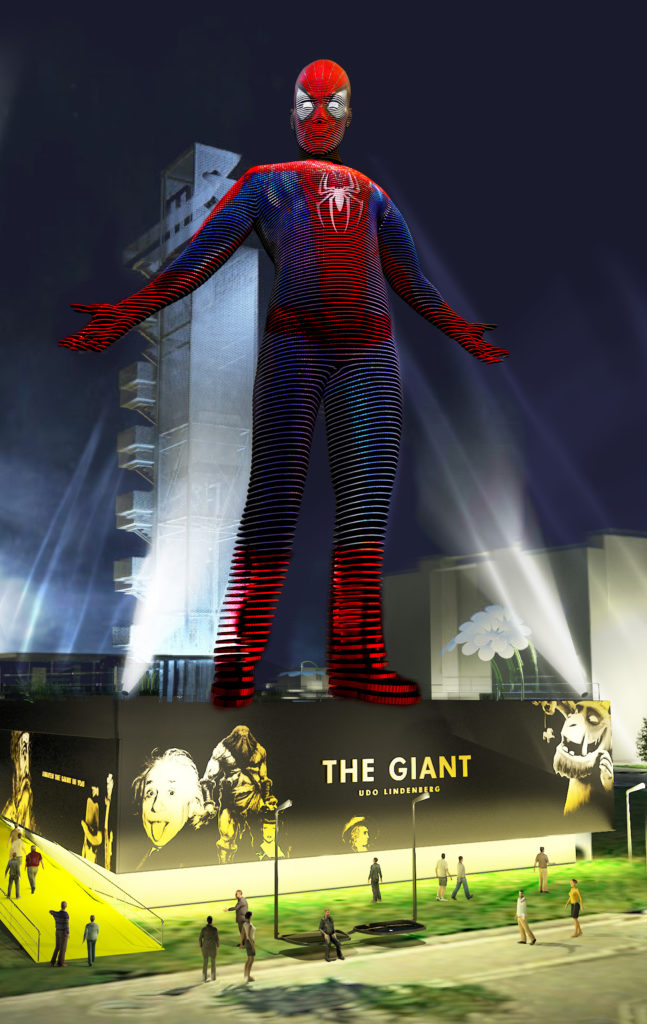 The Giant can take on any form - superhero or otherwise

Supported by Enterprise Ireland and the world's largest commercial real estate company, CBRE, the concept for The Giant includes the multi-storey statue mounted on a plinth housing a novel exhibition.

The ambitious project, which is still under development, is now seeking funding and investors to help make the concept a reality.

Mr Dunning​, who is the man behind Dublin’s National Wax Museum, Temple Bar Music Centre/The Button Factory and a leader in the redevelopment of Temple Bar, Dublin's Cultural Quarter, is hoping to find 21 sites across the globe and interested developers who “want to attract hundreds of thousands of people to a particular location”.

“The Giant will be one of the world’s most ambitious cultural and commercial projects bringing together art, amusement and wonder to create a contemporary and highly profitable business,” he adds.

“We envision The Giant as an adjunct to new urban redevelopment projects, stadiums, arenas, shopping centres, museums and other locations; it’s going to be an awe-inspiring addition to the cities where we locate it.”

Under the current proposals The Giant will transform every hour, changing into an exemplary man or woman, and will also have the ability to speak or sing to the crowds that gather below. 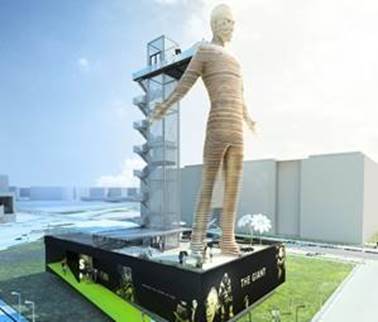 Deemed one of the most exciting visitor projects of the 21st century, multiple Giants could be found across the globe if funding is sourced

Between these dramatic appearances visitors who have been scanned inside the exhibition space will also be uploaded onto the giant statue, resulting in the world’s most spectacular selfie.

“They can also add audio messages to their Giant selfies wishing friends and relatives birthday and anniversary greetings, or offering marriage proposals and other salutations,” The Giant Company team confirms.

The attraction is expected to offer significant economic benefits to any city where it is located - providing jobs and attracting local residents and international tourists.

Each structure will cost between €15–€20million to develop, depending on location and size of Giant, which is variable, but is expected to draw approximately 500,000 visitors each year, generating annual revenues of around €12million.

“Besides income from ticket sales, The Giant provides several revenue-producing opportunities including advertising on the spectacular three-dimensional digital statue; Giant selfies; private and corporate events and conferences and retail shops and restaurants which are situated on the terrace roof garden,” The Giant Company explains.

Mr Dunning and his team are working with award-winning Berlin-based architecture studio ​Dan Pearlman ​on the creation of The Giant​. ​

CBRE has partnered with The Giant Company to find premium sites in cities around the world.

CBRE’s Florence Stanley​ said: “We are very excited to be working on this project sourcing sites in 21 cities around the world.

“Our immediate priority is securing appropriate locations and from there finding investors who will see the huge benefits of situating this iconic attraction in their city.”

Niall McEvoy​, Manager of the High Potential Start Up Dept at Enterprise Ireland, said: “The Giant is a project we have supported from when it was at concept stage.

“At the core of this innovation is an ambitious team that has a vision for developing landmark attractions in multiple city locations across the globe.

“We look forward to supporting the next phase of the roll out of this innovation.”