NOAH DONOHOE may have been assaulted as he cycled through Belfast on the day he disappeared, an inquest into his death has heard.

The 14-year-old schoolboy was reported missing on 21 June last year, resulting a in a large-scale search being launched by the PSNI.

Noah's body was discovered in a storm drain six days later, and a post-mortem showed he had died by drowning.

The search for the teenager led to a number of tip-offs from witnesses, including one who said they saw Noah fall from his bike and begin acting strangely, discarding his clothing before continuing up the road in North Belfast, leading police to believe he may have suffered a head injury.

Police have said they do not suspect there was any foul play involved in Noah's death, but admitted questions remain as to what happened in his final moments; in August the Coronor, Joe McCrisken, said there was "no evidence at present to suggest that any other person was involved in Noah’s disappearance and death".

Now an inquest into his death has heard that the PSNI received several reports that Noah was assaulted as he cycled through Belfast on the day that he disappeared.

Representative for the Donohoe family, Niall Murphy of KRW Law, addressed the preliminary inquest into Noah's death, beginning with the line of inquiry which "requires further investigation" by police.

The PSNI had received statements "that Noah was assaulted as he cycled through the city centre", Mr Murphy said, and he appealed for anyone with any knowledge of this to speak to police immediately.

"We have reason to believe that there is a particular and specific knowledge of this assault in the homeless community and with those struggling with addiction issues,"Mr Murphy continued, "both in the city centre and also from people who were residents at Queens Quarter housing association in University Street, specifically people resident there in June." 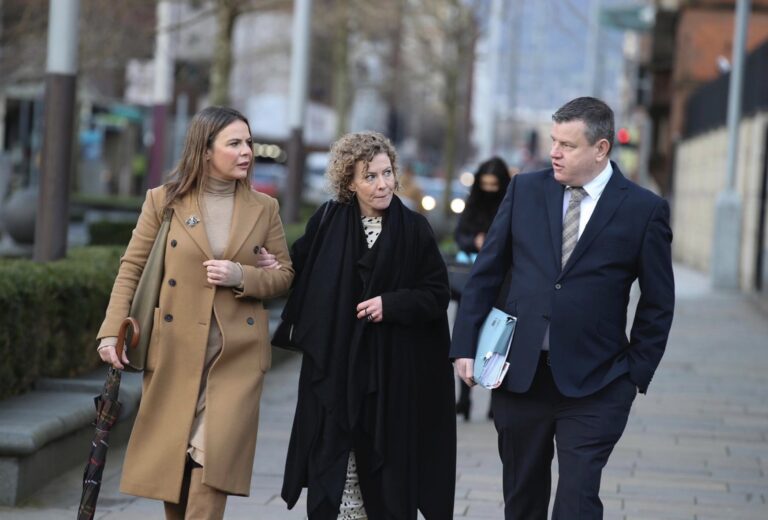 Niall Murphy of KRW Law with the family of Noah Donohoe, including his mother Fiona, centre (Image: KRW-Law.ie)

He urged businesses on Royal Avenue to review their CCTV for 21 June 2020 and make it available to police, and made a "specific appeal" to the people "with relevant photographs stored in their phones to voluntarily present themselves and their phones to police to enable police to forensically download the photos to verify the times and locations that the photos were taken".

Appealing to those who may have images vital to the investigation, he insisted "You are not under suspicion, you have done nothing wrong and you will get your phone back.

"Please help Fiona find out what happened to her son."

The full inquest into Noah's tragic death will take place on 10 January 2022, having been delayed in part due to the coronavirus pandemic.