A NORTHERN Irish woman's American husband has been denied a visa from the British Government as she does not identify as a British citizen.

Belfast-based couple Emma DeSouza, 29, and her Californian husband Jake, 28, married in Belfast in July 2015 and applied for Mr De Souza's residence card in December that year.

Under the Good Friday Agreement, both the British and Irish Governments recognise the birthright of all the people of Northern Ireland to identify themselves and be accepted as Irish, British, or both, as they may so choose.

This also confirms their right to hold both British and Irish citizenship is accepted by both Governments and would not be affected by any future change in the status of Northern Ireland.

But after Mr De Souza's application was refused 10 months later in September 2016, the couple discovered it was because Mrs De Souza had declared herself as an Irish national.

Mrs De Souza says the Home Office has ignored the fact that she has never identified as a citizen with a dual nationality or British citizen.

"The Home Office refused the application because we applied for a resident's card as I identify as Irish only so I classify as an EEA national. 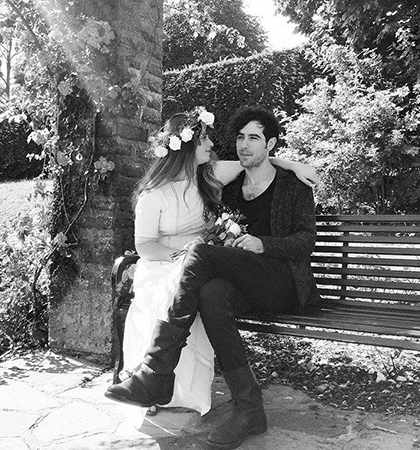 Emma and Jake De Souza have been unable to travel home to Jake's native California as the Home Office have retained his passport since 2015.

"They gave us an option in the refusal letter that said if you want to be Irish only you have to renounce the birthright to British citizenship that you have, which isn't too much of an issue but the first line of the piece of paper says, 'I am a British citizen'.

"So first you have to declare your citizenship as British - then denounce it. For me it was a conflict of interest, why should I have to say that I'm something I'm not in order to get through this process?"

The couple are awaiting a date before a tribunal to have their case heard and also to highlight the retention of Mr De Souza's passport since December 2015, preventing him from leaving Northern Ireland.

"My husband is extremely homesick at this point, and I'm feeling quite confused because to me, we should not have had an issue in our application.

"Two years is a very long time to restrict yourself with work, and to not see family. He hasn't been able to go home to California, and his grandmother is 92 - which is a great age - but it makes me very nervous because what if something happens and he hasn't seen her in two years.

"We spoke to the US Embassy and they said if a family emergency does arise, they can issue an emergency passport for a one time trip back home, but they would need to speak to the Home Office and confirm that he would be able to get back in to Northern Ireland."

"We've been told that we will not get the passport back until the case is resolved, and that's not looking like it's going to anytime soon," she said.

"That is important because the 1998 Act gives legal protection to Ms DeSouza's human rights and affords her protection under section 76, which deals with discrimination by public authorities, of which the visas and immigration section of the UK Home Office is one.

"The section states that it is unlawful for a public authority carrying out functions in relation to Northern Ireland to discriminate or to aid or incite another person to discriminate against a person or class of person on the grounds of religious belief or opinion.

"The visas and immigration section of the UK Home Office is refusing to accept Ms DeSouza's Irish nationality and is, therefore, discriminating against her and her husband."

In a statement the Home Office have said: "We do not routinely comment on individual cases. All applications are considered on their individual merits and in line with the relevant legislation and published guidance.”

MSM Law, who are the De Souzas legal representatives, said: "The sole ground of refusal in our client’s application was the fact that the Home Office found Emma De Souza to be a dual national.

"The Home Office have stated that Emma must renounce her British citizenship in order to be treated as an Irish citizen only.

"Emma has never held a British passport and she considers herself an Irish national, not British. Emma has the right to be treated as such.

"Our clients have cooperated fully with the legal process, currently waiting over a year for a hearing and will continue to show courage and determination in pursuing this appeal."