A WOMAN from Castleblayney in Co. Monaghan who suffers from a rare heart defect is set to brave sub-zero temperatures as she takes on a half marathon in the North Pole.

Regina O’Reilly, who lives in Nottingham, was originally going to run the full marathon until she was diagnosed with hypertrophic cardiomyopathy last year.

She will take on the 13.1-mile challenge on April 9 to raise money for the Heart of Experian Charity Fund, which supports small groups through difficult financial times.

The 40-year-old’s polar run has been in the works for the last two years, with close to £30,000 raised for charity by the campaigner so far.

Impressively, Regina has run 16 marathons since 2011 but none quite like the epic run around the North Pole, which only three Irish women have completed to date.

She has raised over £80,000 for various charities over the years, including Bowel Cancer UK - in memory of her dad Frank, who died from the disease 10 years ago.

Last year she was told she had hypertrophic cardiomyopathy, which around one in 500 people in Britain suffer from.

Those with the condition who are physically active have been known to suddenly pass away without warning.

Regina told The Irish Post: “It’s quite common. About one in 500 have it but if you have it and you’re active, you have to get checked. I’m the active one of the family so there you go.

“We all got checked and we all have it. My mum said there’s nothing to worry about because she’s made it to 70 but I said, ‘you’re not running marathons in the North Pole!’ 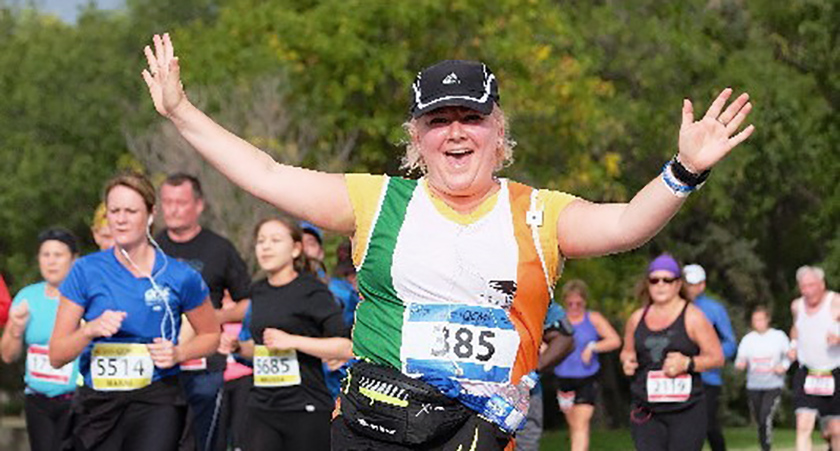 “I knew there was a chance I could have it as it’s genetic and my cousin died from it about 25 years ago. But I won’t let it stop me.”

Running in the North Pole presents a whole host of challenges, from the possibility of polar bear attacks to hypothermia from the extreme cold.

To prepare for the sub-zero conditions she will face, Regina took part in the Polar Night Half Marathon in Norway back in January.

“It was freezing but it was bearable. But I know that running in the North Pole is going to be a whole other ball game,” she says.

With the help of students at Nottingham Trent University, Regina is also using a freezer compartment with a treadmill to acclimatise to temperatures as low as -10c.

But temperatures at the North Pole regularly dip below -40c, and Regina admits that the run poses a challenge like none other she has faced.

“I’ll be wrapped up warm, that’s for sure. But as much as I’ll be cold at the beginning I can only wear two or three layers. You can’t afford to wear too many,” she explains.

“You cannot overheat out there or you will start sweating and that will turn to ice. Then you can get hypothermia.

“There’s another Irish girl running with me and we are determined to see it through. I don’t think I’d be able to live it down if I turned back now!”

Donations can be made to Regina O'Reilly's fundraising efforts here.