AN OHIO LAWMAKER has sensationally blamed gay marriage and the “breakdown of traditional American families” for the mass shooting which occurred in Dayton over the weekend.

Candice Keller, a Republican state representative posted a rant to Facebook before quickly deleting it later.

In it, she listed a host of ‘reasons’ for the massacre which saw nine people gunned down on Sunday in her state, which included gay marriage, transgenderism, athletes who fail to salute the flag and Barack Obama.

“After every mass shooting, the liberals start the blame game,” Keller wrote. “Why not place the blame where it belongs?

“The breakdown of the traditional American family (thankyou, transgender, homosexual marriage and drag queen advocates); fatherlessness, a subject no one discusses or believes is relevant; the ignoring of violent video games; the relaxing of laws against criminals (open borders); the acceptance of recreational marijuana; failed school policies (hello, parents who defend misbehaving students): disrespect to law enforcement (thank you, Obama); hatred of out veterans (thank you, professional athletes who hate our flag and National Anthem),” 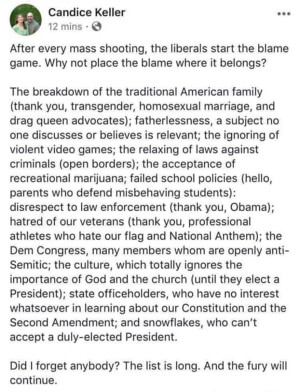 Keller goes on to point the finger at Democratic politicians, snowflakes and those who ignore the importance of God.

“Did I forget anybody? The list is long. And the fury will continue,” she concluded.

The post caught the attention of several other Ohio politicians who were quick to denounce her remark and urge her not to play the blame game so soon.

Even fellow Republicans appeared to be taken aback by Keller’s comments, with Butler County Republican Party chairman Todd Hall saying: “Some want to politicise these events, and I cannot condone such comments and behaviour.”