A BLACK AMERICAN man died of asphyxiation after a number of police officers pinned him to the ground and held him there for over two minutes.

Daniel Prude died in hospital on March 30 after being put on life support following the altercation with the police in Rochester, New York days before.

His death is eerily similar to that of George Floyd who died of asphyxiation at the hands of police officers in Minneapolis, Minnesota on May 25.

It received no public attention until Wednesday when Prude's family held a press conference and released police body-cam footage of the altercation.

Footage of the incident shows officers approaching Mr Prude as he lay in the middle of a street at around 3am on March 23.

He had taken off his clothes and appeared to be very agitated. He had also reportedly been smashing windows in the area. 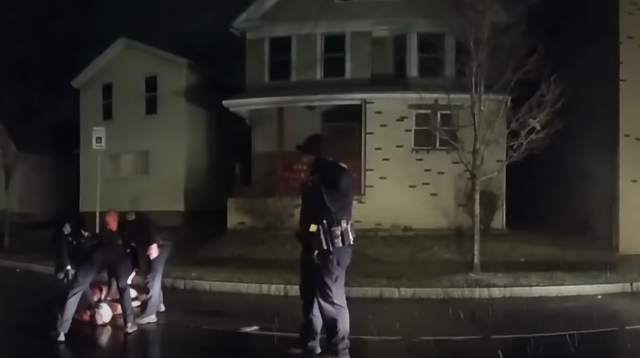 The officers handcuff him and eventually put a spit-hood over his head, at which point Prude begins to panic.

In response, the officers restrain him and pin him to the ground, with one policeman sticking his knee into the back of his neck.

Prude can be heard whimpering as his face is pushed into the concrete, and officers only notice something is wrong when they notice water coming out of his mouth.

Paramedics were called and Prude was rushed to hospital, where he was put on life support. After seven days in hospital, he passed away.

A medical examiner concluded that Mr Prude's death was caused by "complications of asphyxia in the setting of physical restraint.

"How did you see hum and not directly say, 'the man is defenceless, buck naked on the ground.' He's cuffed up already, come on.

"How many more brothers gotta die for society to understand that this needs to stop?"