THE desperate parents of an eight-week-old boy in need of a life-saving heart transplant have launched an urgent fundraising campaign to help get him the treatment he needs.

When little Lenny Donoghue was born at the Royal Maternity Hospital in Belfast on February 15 only half of his heart was working.

Prior to his birth his parents John and Tessa Donoghue were told their unborn baby had the rare heart condition Hypoplastic right heart syndrome – a congenital heart defect in which the right atrium and right ventricle are underdeveloped. 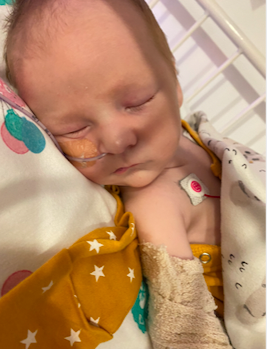 “As parents we are living through any parent’s worst nightmare,” the couple, who live in Belfast, told The Irish Post this week.

“Late on in the pregnancy we were told that our unborn baby had a very serious and rare heart condition,” Tessa explained.

“Myself and my husband John were worried sick,” she added, “and when I gave birth to Lenny we did not know if our son would even come out breathing on his own due to his condition.”

Thankfully Lenny did arrive breathing, but, due to his condition, the right side of his heart hadn’t formed and there are sinusoids blocking the circulation around the only few valves he has on his left side, which can prove fatal.

Sadly, he has been fighting for his life ever since. 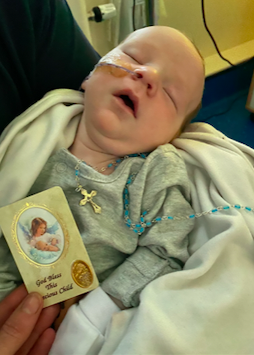 The Donoghue family have launched a campaign to raise £10,000 for Lenny's treatment

“We have arranged Lenny’s funeral over and over again in our heads,” Tessa admits.

“We were told when he was four weeks old that it would be his last night, we have watched on when he is grey and not responding and we have held him dearly in our arms, hoping that we will wake up and this will all just be one horrible nightmare.

“To our relief Lenny puts up with the best fight he can with basically only half of his heart working.”

She added: “We pray day in and day out that our precious boy comes through this and that we don’t have to go through the unimaginable experience of burying our son.”

As desperate as the Donoghue family’s situation currently is, there is some hope for Lenny’s future – but it requires him having a full heart transplant.

Lenny, who is currently at the Royal Belfast Hospital for Sick Children, has been placed on the waiting list for a new heart at Great Ormond Street Hospital in London.

However, his family believe he may not have the time to wait on that lengthy list. 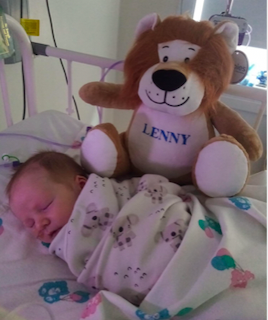 There is a better chance of him getting a transplant quicker in the US, so the Donoghues have launched an urgent fundraising campaign to help raise the cash needed to get him there.

“We are raising funds to get Lenny his heart transplant, as we have been told that it would happen a lot quicker for if we got him to America,” Tessa confirms.

“He has been put on the heart transplant list at Great Ormond Street but we were told that there is an extensive wait and our Lenny the lion just cannot wait.”

She added: “Funding is vital, so please, we know times are hard for everyone right now, but any amount donated is so greatly appreciated by us.

“We also ask everybody to please continue to pray for Lenny.”