PIERCE BROSNAN set tongues wagging over the weekend with his striking new facial hair at the Golden Globe Awards in Los Angeles.

Cillian Murphy got the ball rolling with his brand-new beard, which debuted in the first trailer for A Quiet Place Part II last week.

Not to be outdone by the man tipped with following in his footsteps as James Bond, Pierce Brosnan has waded into the breach with a striking new bearded look of his own. 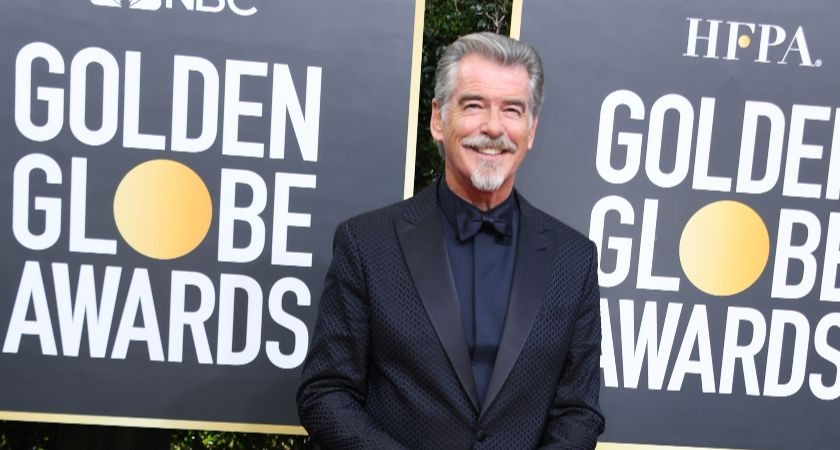 Famed for his sense of style, Brosnan’s facial hair may have shades of Kentucky Fried Chicken creator Colonel Sanders to it but the Irishman still manages to pull it off.

In the wake of his arrival at the Beverly Hilton for the 77th annual Golden Globes, Twitter was awash with comments about his finger lickin’ new look.

The KFC comparisons did not go unnoticed either with some questioning why the Irishman would model his look on the fried chicken king while others simply branded him a “sexy Colonel Sanders”.

Whatever the case, it would appear that Brosnan is now a shoo-in to play Sanders, once the inevitable biopic goes into production.

Appreciation for the Kentucky Fried Bond wasn’t just limited to those at home either.

Comedian Will Ferrell also took the opportunity to show Brosnan some love after they took to the stage together to announce an award winner.

Will Ferrell just saying what we’re all thinking about Pierce Brosnan. pic.twitter.com/Cb15tELJbb

Will Ferrell is all of us. Pierce Brosnan is ridiculously good looking. #GoldenGlobes pic.twitter.com/hOdgKmzwRn

Of course, the explanation behind Brosnan’s distinctive new beard may rest with Ferrell, himself.

The two are starring together in a new comedy set around the Eurovision song contest.

The film, titled simply Eurovision, stars Ferrell and Rachal McAdams as struggling Icelandic musicians Lars Erickssong and Sigrit Ericksdottir who are selected to compete at the annual music competition.

Ferrell hit upon the idea after being introduced to Eurovision by his Swedish wife, Viveca Paulin, a few years ago.

An avid fan ever since, Ferrell is writing the film with Saturday Night Live scribe Andrew Steele while Wedding Crashers director David Dobkin is helming the project.

Though details on the project remain scarce, Deadline has confirmed that Brosnan has bagged a key role in the film and one that already sounds amusing, to say the least.

The Irishman is set to play Erick Erickssong, the father of Ferrell’s character and a man known as the “most handsome man in Iceland”.

Could his new beard simply be for the film? Plenty will be hoping not.