POLICE are appealing for information after an improvised rocket launcher and other ‘terrorist-related’ weapons were discovered on a road in Co. Antrim.

Detectives with the PSNI’s Serious Crimes Branch made the discovery during a security alert at Budore Road in Dundrod on Sunday.

They also found a replica handgun, a baseball bat, a hammer and gloves in a small bag near the rural village.

Police suspect dissident republican involvement and said the “viable” rocket launcher may have been there for up to a month.

A number of roads in the local area were closed after the discovery to ensure the safety of the public whilst enquiries were carried out.

The roads have since reopened after the objects were removed for a forensic examination. 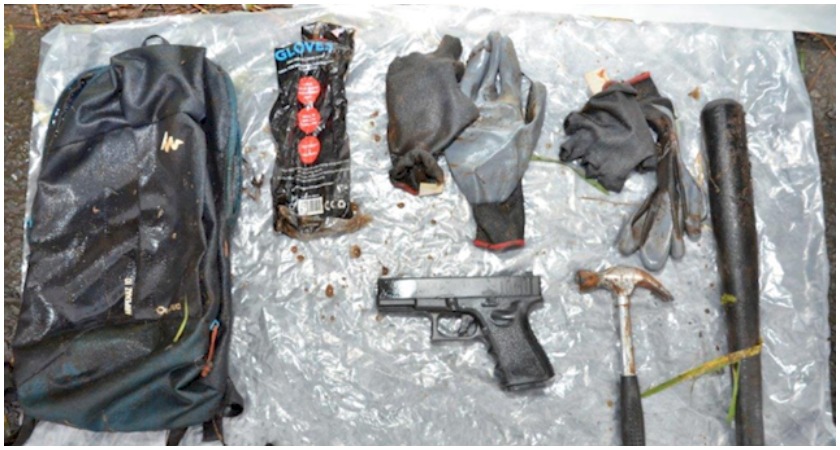 Other 'terrorist-related' items found in the haul (Picture: PSNI)

Detective Inspector David Lowans from PSNI’s Serious Crime Branch said: “Our investigation is at an early stage, however we now believe that the improvised rocket launcher has been in the Budore Road area for between 3-4 weeks.

“We have also established the launcher was viable which demonstrates that whoever left it there had no regard for who might come across it.

“During further searches on Monday, officers found a bag in a ditch less than 40 metres away from the rocket launcher which contained a replica pistol, baseball bat, hammer and gloves.

“While I am not able to link the finds at this stage they both bear all the hallmarks of dissident republicans and this is a strong line of enquiry.”

Anyone with information on the weapons is asked to contact detectives at Castlereagh on 101 quoting reference number 1143 08/10/17.

Information can also be given anonymously through the independent charity Crimestoppers on 0800 555 111.